Why Scrooge McDuck is better than Bill Gates

Rant alert: some ranting may appear in the content below. 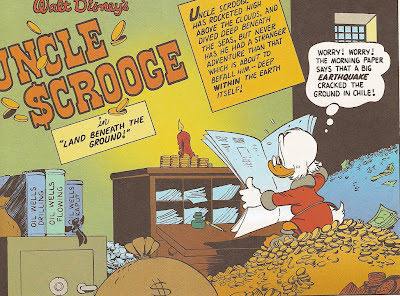 Okay, that title may seem off-topic. After all, as the book How to Read Donald Duck: Imperialist Ideology in the Disney Comic points out, Disney comics are all about imperialism, and we know that Wunderkammern are not. Right?

Well, not necessarily. Looking at the Age of Exploration, and how it ushered in both science (in its modern form), and imperialism of the worst sort (read: Conquistadors, Dutch East India Company, British Empire, and our good old American "military advisors"), it is clear that there is a flip side to the kind of wonderous mentality I have talked about in previous posts. After all, some of the most interesting things found in Wunderkammern were things co-opted, wrested or wheedled from people in other parts of the world.

However, as a longtime reader of Donald Duck and his elder (and weirder) relative Scrooge, I beg to qualify.

When I was a kid my father collected comic books. Not a lot of them, but he had a few, some of them really interesting. He let me read his Donald Duck comics, mostly written by Carl Barks, which was probably a mistake, as they were no longer pristine after I had read them twenty times. I will say, though, that they certainly made an impression on me.

Many of the best stories are about Uncle Scrooge's quest for owning the most valuable things in the world. So in that sense, they are indeed imperialist, and assume a sort of outdated sense of the white duck's right to take things from other, differently-colored, less "developed" people around the world.

However, there is something very important to be said for Scrooge: when he wants something, he goes there himself to get it, even though he is an old duck with a fabulous fortune at his command. His adventures are what make him worth reading about.

Now, I need to take a moment here to talk about pulp fiction. The (non-sexual) pulp fiction, by definition, was full of wild adventures, explorations, discoveries, and tales of strange occurrences. There is an interesting reverse correlation between the exploration of the (un)known world and the rise of pulp fiction: the more we knew about our world, the more wild the stories in the magazines, as if people's imagination craved more the less there was to wonder about. (the Hollow Earth book, in a previous post, has a nice section on pulp fiction, by the way). In general, pulp fiction was for adults; but some of the best comics of the day followed the pulp format, including, in a slightly classier and more humorous way, the Donald and Scrooge comics. 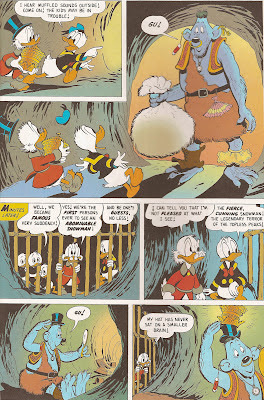 As in pulp fiction, Scrooge's amazing geographic discoveries are mostly not-real or thinly disguised (though he does visit the Yukon to find his lost stash). But, like a true pulp hero, he goes into it willing to lay his own safety on the line for greed. And, unlike the standard pulps, which lack a sense of humor, we know all about his personality: he is a cantankerous, greedy boogerhead who chisels his own nephews and often screws up. He is, within the comic format, pretty realistic - and we like him because he's so annoying, greedy, etc, and therefore real.

Bill Gates, on the other hand, is anything but a pulp hero, annoying or not. He is a total cipher. We wonder, in fact, if he could possibly be not-real, like Scrooge's locales. He's probably as rich as Scrooge; you know that old adage that if Bill dropped a $500 bill it would not be worth his time to go back and pick it up (of course, if he were Scrooge, he would go back for a dropped dime)? He doesn't seem to be as greedy as Scrooge, but who's to say? Maybe his wife knows. Ultimately, he seems nice enough. And, well, terribly bland.

Which brings us to this: Bill Gates, while smart and pretty savvy, was also lucky. He came along at the right time. He worked pretty hard. But he's a new breed of wealthy, nothing like the old dubloon-wielding explorers who went out in search of their fortunes: he happened on his wealth. I get the sense he doesn't really know what to do with it. Look at pictures of him: have you ever seen anyone so boring?

But Scrooge - Scrooge is hands-on. Like Indiana Jones and his pulp treasure-hunting ilk, he is larger than life. He actually bathes in cold cash (don't you kind of wish Bill Gates did that?). He loves his money, not for what it will buy or what it means in the larger context; he just loves it for itself. He is a collector, obsessed with his collection. He almost can't help himself; his office is a Wunderkammer devoted to wealth. He is incredibly superstitious, and has numerous lucky talismans that he guards jealously. He is a believer in wonders.

I have a weird vision of Bill Gates, in his inevitable unimaginative checked shirt, trying to rescue the Lost Crown of Gengis Khan from the Abominable Snowman. Do you think he would escape? Or convince the Snowman that he had caused a miracle? Would he throw down bundles of rubber and bounce from one to the other to escape Mombie the Zombie? No, he probably wouldn't believe that Mombie was a zombie. But then, if Bill Gates were Scrooge McDuck, Mombie would be wearing a tie, and be a tax-collector.

Bill Gates is the personification of How to Make Being Rich the Most Boring Thing In the World. Face it: people think that being rich is fun (imagine yourself bathing in that money!). And, if you're creative, you'll be thinking that "fun" would be a lot like Scrooge McDuck's adventures, except maybe with some interesting ways to give money to crazy artists or something. But the truth is, as a modern rich person, you would need to hire an army of accountants to find things to do with your money. Hell, you probably never even see your money in cold, hard cash (remember Harry Potter's bank vault?). I'll bet Bill Gates hasn't seen more than $2000 of his money all in one place before. His kind of money is invisible to the naked eye. It's conceptual. It's being groomed and moved around and taken care of by experts, so that it will keep growing - exactly like modern science: compartmentalized, optimized, and managed. All Bill Gates has to do is sit around and give talks and start foundations which largely run themselves, and maybe decide if his advisors have good advice.

Perhaps I am influenced by my upbringing, drinking Horatio Alger with my mother's milk, believing, like Nathaniel West's Lemuel Pitkin, in my divine right to be rich (60% of Americans believe deeply that they will be extremely rich someday). We can be anything we want, if we just work hard enough! Get dirty, put your nose to the grindstone. Got to get in there and roll up our sleeves, put some elbow grease in; then we'll make it big. I'm going to be President when I grow up!

But... it's hard to admire a stuffed shirt. Think about it in terms of storytelling: which is more exciting, a movie about a bank heist, where people walk off with a suitcase full of money, or a movie about boardroom politics? Why is Pirates of the Caribbean, and pirates in general, so popular right now (hint: treasure caves, cool clothes, physical danger)? Why isn't it cool to comb your hair and sit in an office moving money around? Yawn.

Have you ever seen a picture of Bill Gates with his sleeves rolled up and a shovel in his hand? Have you ever seen him get dirty? I can't even imagine it. Scrooge McDuck, on the other hand, gets dirty, and wet, and hit on the head, and schemed against, and lost, and all manner of explorer-type predicaments. And: he swims in his money. In fact, his money vault is nearly 100 feet deep. He still has every coin he ever earned - and he can recognize each of them, tell a story about it. Which to me is the ultimate goal: my ideal home is one in which every little thing, every dish and every object on the shelf, has a story behind it.

Now maybe because Scrooge get all the episodes of his life published for everyone to read, we know of all his trials and tribulations. Bill Gates is invisible, hiding behind security gates (sic) and darkened car windows (although, would you notice him if you saw him on the street?), so it is assumed he is as boring as he looks. I don't know anything about his life, do you? For all I know, he goes out into his garden and digs when he's mad at his wife, or keeps chickens that he loves and who poo on him when he picks them up. Or perhaps he secretly goes to central America and builds houses for poor people with his own hands, for sport; or spends his free time looking for leprechauns.

I hear that at Bill Gates' house, you wear a small microchip in which you program a few things: How you like your coffee, an image you prefer, the temperature your most comfortable at, a song you're partial to, your favorite light wattage, and as you move through the house, the TVs in each room light up with your image, the lights dim to perfection, and the coffee maker spits out an espresso with milk and just a little sugar.

I think each room being the exact same temperature and lighting would make me feel nauseated. Talk about no knowing what to spend your money on...why doesn't he just have an army of robots built to carry him around the house, stir his tea, and fan him when he's hot?

I don't know...that sounds like urban myth to me! Seems like when someone's that bland and rich, you can project anything you want to onto them. My friend Robyn says, "I'll believe it when I can launch Vistas without Microsoft Word crashing" which seems apropo, somehow. So:

Actually, when you go into his house you are given a chip which shows you nothing but baseball games (oops) and blares Black Sabbath at you while spotlighting you as if you were John Travolta in his white suit. ...Oh, sorry, the system's crashed again.