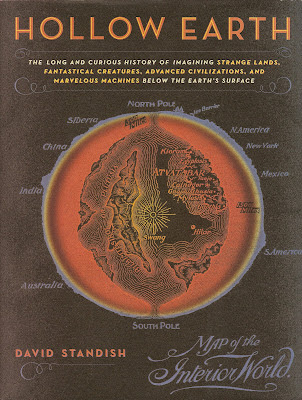 I just found this book last weekend and have been reading it, on and off, since then. It's, as a friend of mine would say, "a damned good read."

Beginning with Edmond Halley in 1691, and continuing on through Poe and Wells and on into L Frank Baum, only to take a turn into pulp with Edgar Rice Burroughs and others, this fascinating book covers the history of envisioning the earth as a hollow sphere. Such people as Halley, who edited and published (not to mention correcting proofs of) Isaac Newton's Principia, were quite serious about their proposals that the earth is not only hollow but a series of concentric spheres, in Halley's model turning independently on a north-south axis, probably with life inside and some kind of light like the sun itself.

So deadly serious were these people that one man, Captain John Cleves Symmes, handed out printed circulars of his own composition in 1818, stating that if anyone would fund him, he would go to an opening he (by unknown means) postulated lay near the poles, and lay his life on the line to prove to the world there were other places within. Symmes took his request for funds and sponsorship to congress, and was repeatedly turned down. He continued with this obsession until the end of his life, lecturing and writing articles for the papers. When he died his son took up his cause, and a book was written about his theories.

The stories go on and on, including Jules Verne's idea that the Aurora Borealis was really light coming out of a hole in the earth in the arctic; Cyrus Teed, the man who was known as Koresh, who claimed he discovered the Philosopher's Stone and who started a cult based on his ideas for saving humanity by "moving inside"; and innumerable utopias, romances and other fiction that began more and more to use the hollow earth idea as a pasteboard for the authors to communicate their ideas.

Richly illustrated with images that we would all love to have large to hang on our walls, the book is worth a look; I keep it by my bed and read bits of it before I go to sleep, in the hopes that it will bring me interesting dreams.
at 5/16/2007

There is a wonderful relic in St. Stephen's Basilica here in Budapest. Known as the Holy Right, it is the shriveled right hand of St. Stephen clutching some royal jewels for all to behold. In August they take it out and parade it through the streets. People go wild. You have a wonderful blog, keep up the good work.

Crap, meant to post that last comment to the entry above, not the hollow earth entry... as long as I'm here, have you read Banvard's folly by Paul Collins? It has a chapter on Symmes. He's an excellent writer.

Just want to echo D's praise for both your blog (which I just plugged at Cliopatria) and Paul Collins' Banvard's Folly.

But I think you have underestimated Cyrus Teed's wackiness. He didn't think we should move inside the hollow earth - he believed we were already IN the hollow earth - that the whole universe was a sphere the size of the earth and we live on its inside.