The Intricacies of Holograms

In the 1970's and 80's holographic art was all the rage. People couldn't believe that a 3-dimensional object could be put onto a 2-dimensional surface. "You can see around it!" came the cries of children walking through science museum exhibits.

Now, with holograms on every credit card and in all those hideous shops full of cheap Chinese-made trinkets, holograms are not only ordinary, but, as the BBC paraphrases it, "[they] have become kitsch and naff." (see the picture below)

The problem with holographic art was much the same as the problem with computer art: people are too interested in the technology. Very rarely do technophiles make great artists (and vice versa), regardless of the hype. The holographic art of the 70's and 80's have much the same quality: they look like they were made by people saying, "Wow! Look what happens when I do this!" - which I suspect they were. There is little indication of consciousness of rigorous artistic critique.

And who can blame them? They were, so to speak, putting their toes into a sea that no-one had yet swum in. (I know, "swum" is not a word. But it should be.) So they were playing around! So what?

The problem is, of course, that with the asthetic bar so low, and with technology being the only barrier in the way to mass-production, we all got sick of the things. They were cheesy; they were everywhere. They lost their magic.

When I was younger, I had a friend whose father, Lloyd Cross, had been one of the top people in holography in the 1970's, and who was still sought as an expert on the technology. Visiting his house was odd; blackboards hung all over the kitchen, and several computers displayed models he was working on. At intervals, he would jump up and write something in chalk, or do something on the computer, and then sit back down again to his sandwich or his cigarette, to all appearances going on with a normal, slightly slacker, life. 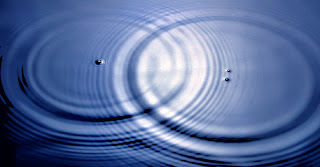 Pondering the "Magical Thinking" post, and some of the comments I received about it, I remembered asking my friend to explain holography to me. He did, and it really opened my eyes to some amazing ideas. This last week, trying to think of some examples of truly magical science, I kept coming back to that conversation. Forget abstract discoveries in higher physics and very complex mathematics - buckyballs and dark matter come and go! - this single thing had continued to capture my imagination, in the back halls of my mind, for the last twenty years.

If you think about it, I'm not alone here. There is one thing which has always been a source of wonder and mystery, even among the scientific community, and that thing is light.

True, its cousins the particles are also pretty interesting (I was lying when I said forget about all that), but light itself is so common, a part of every person's life-experience, and somehow it still eludes our understanding. It plays peek-a-boo with us and seems to know what we're going to do before we do it. Is it a wave? A particle? Why does it squeeze through those gaps and spray itself around so? More recently, there has been discussion of light as a gas/liquid (see New Scientist, 7/02). It has a cheeky side, and it's not afraid to do tricks - both for us and on us.

This is what my friend described to me all those years ago:

1. Take a single laser beam, and split it in two. This is important, because all light used must have a single, perfectly sincronized wavelength. Therefore it must be a laser, and it must be the same beam of light.

2. Now, with the aid of very clean mirrors and lenses, one bit of this beam is widened and sent to bounce off an object.

3. The other bit of the beam is brought around to another side, widened, and brought in at an angle to the other half of the beam. The reflected beam of light from the object, and the uninterrupted beam of source light cross each other, causing an interference pattern, and this is what is captured on the film-plate.

4.When a light is shone on the film-plate, the interference pattern is revealed, showing us the exact reflected pattern of the object, with distances intact.

That's the essence of it (more in the links below). Now here's a bit of magic: cut a hologram up into pieces, and each individual piece will show the whole image. There will be less dimensionality, but each fragment will contain a tiny version of the complete image. I have no idea why this happens, but it's very cool.

Another amazing thing about holograms is that if you change the angle, or the wavelength, of your light, you can store information over and over again in the same place, because the interference patterns don't.. well.. interfere with each other. Instead they can lay next to each other like microscopic sardines, only intertwined, sort of.

When my friend described this to me, I went home with my head in a whirl. I began to think like our Baroque friends might do, thoughts such as "What if this isn't the only place in the world where interference patterns create images?" and "What if we could create hard copies of things like sounds that way?" "What if you could use this technology to make little building-blocks of information?" And on and on (by the way, this was before Star Trek's Holodeck, in case you're wondering). 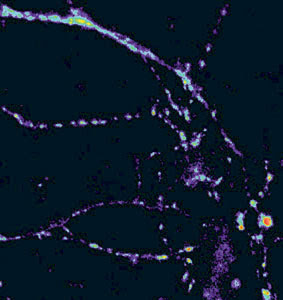 Light-emitting sensors on nerve cells, courtesy of Dr. Gero Miesenböck
I was living with a friend who was deep into studying brain networks and neuron-firing at the time, and somehow the two blended in my tiny brain and I started imagining that our neural networks held interference patterns which created the images we saw so clearly in our mind's eye. More than that: the smells we remember, the sounds...all electrical interference patterns literally playing back those holographic memories that had been imprinted in those networks and pathways, interlaced from different angles and patterns to let our brains hold so very, very many memories.

Interestingly, in doing research for this post, I was reading Tweak 3D's description of how holographic storage works (see link below). One of the things they mentioned was this:
"However, as you keep recording more data pages slightly away from previous pages, the holograms will begin to appear dimmer and fogged up because their patterns must share the material's finite dynamic range and the data page is physically etched into the crystal. Eventually you will run out of space to store because the crystal has depleted all of its physical storage capacity..."

Sound like the brain of anyone you know who's lived a full and long life? Ever pay attention to how old people's older memories are sharper than their new ones? So maybe my theories are not so bizarre after all; maybe we die when our "finite dynamic range" is all used up...

So yes, I suppose there are still whole areas of science that elude the evolution toward mundanity. It's just getting harder to find the ones that get you thinking, make you want to explore. 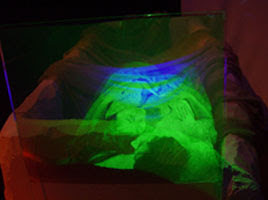 Ikuo Nakamura, "Fossils", 2000
The only thing about this technology that is bothering me nowadays is that it seems to have become a technology. In other words, the asthetic possibilities (probably for the reasons above) are getting less and less interest, even as the technology gets easier and more artist-friendly. There are some people who are doing some interesting things with holography, but I would like to see more and better. Improving the technology is all very well, but what about presentation? What about capturing people's imagination again? That is part of an artist's job, and I wish I saw more people attempting it.

On a last (and totally unconnected) note, I found this image (below) and feel it could be proof that modern science can, indeed, create objects as beautiful as those marvelous inventions in the Cabinet. Though I might question how deliberate its beauty is, and alas, it is not something one can hold in one's hands and enjoy the use of. 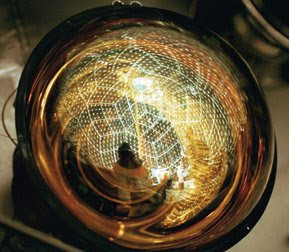 A few place to find out about the science part of holography:

- Tweak 3D's article about holographic storage technology, with a good description along the way of how holograms are made.

- holoworld.com's Holography Links page, to what appears to be all things holographic.
at 5/07/2007