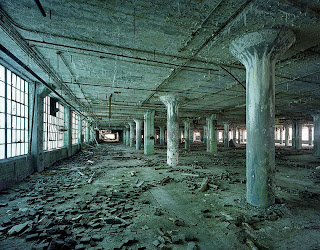 I just came across this while looking for something else in Google images: a project by Yves Marchand and Romain Meffre, called The Ruins of Detroit, a 5-year collaboration between 2005 and 2010.  This is part of what they have to say about the work:

"Detroit, industrial capital of the XXth Century, played a fundamental role shaping the modern world. The logic that created the city also destroyed it. Nowadays, unlike anywhere else, the city’s ruins are not isolated details in the urban environment. They have become a natural component of the landscape. Detroit presents all archetypal buildings of an American city in a state of mummification. Its splendid decaying monuments are, no less than the Pyramids of Egypt, the Coliseum of Rome, or the Acropolis in Athens, remnants of the passing of a great Empire." 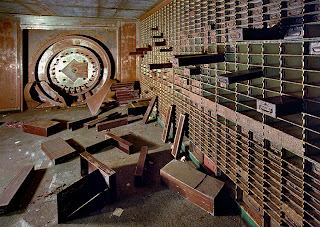 My father grew up in Detroit in the 1930s and 1940s, worked in the auto factories during the summer, and went to the grand movie houses during the height of the movie era.  I have always wanted to visit the Detroit of his youth, and looking at these pictures is, in some ways, like looking at him: under the age are traces of a marvelous youth, a grace and power that still speak to us, despite the passage of time.  It's both breathtaking and heartbreaking to see these remains of another era.  Particularly, I find the image of the theatre to be beautiful and sad. 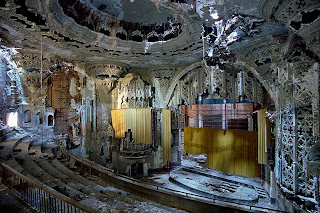 Those Who Come While We Sleep 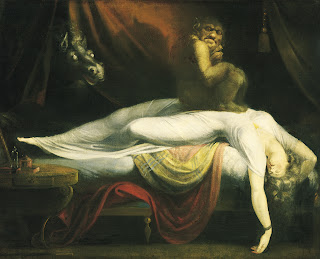 I used to have these naps.  They were strange naps; I would lie in the sun in my apartment some afternoon when I'd been working really hard, and I would fall into a sleep so profound it was almost painful.  And then, when the first depth of it had passed, I would find myself lying there, unable to move, trapped in my nap.  It was like I was pinned to the couch or the floor -- wherever I'd been lying -- and the nap went on, and I couldn't move, the sleep was so intense; and yet I wasn't fully asleep.  It would go on for some indeterminate amount of time, and then I would be released. 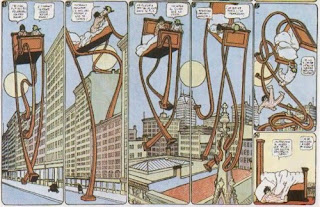 Being the kind of person I was, I didn't worry about these naps.  Sometimes I thought they were brought on by sugar, sometimes I thought they were a gift, a kind of ubernap that refreshed me more than usual.  Once or twice, though, I thought I saw something that really shouldn't have been there: a small man sitting on the foot of my bed, a strange glittering shape in the corner of the room.  And I remember all the way back to being a baby, lying in my crib, terrified, unable to move while these shapes streamed at me from the ceiling.

These unmoving waking-dreams have a name, as it turns out; it's called Sleep Paralysis.  Apparently, when the body is moving between sleep and wakefulness -- at either end of the sleep cycle -- the body can be in REM sleep while the mind is awake.  It's related to lucid dreaming, where the dreamer is aware that he or she is dreaming and is able to gain some control of the dreaming experience, and to out-of-the-body experiences; in sleep paralysis, the sleeper tends to fixate on re-establishing control over their body, but in an out-of-body experience, the sleeper perceives themselves as being separate from their body. 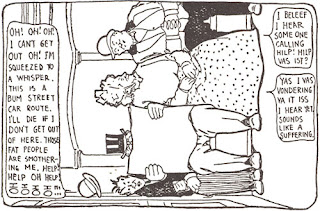 The body naturally falls into a sort of paralysis when it is in REM sleep, called REM atonia, where muscles are kept from reacting to the dreams the sleeper is experiencing.  Think of cats or dogs twitching while they dream of hunting: most of the muscles are disabled, but the echo is there, the ghost of the movement.

Then of course there is the sexual dimension:

"The release of certain neurotransmitters... is completely shut down during REM. This causes REM atonia, a state in which the motor neurons are not stimulated and thus the body's muscles do not move. Lack of such REM atonia causes REM behavior disorder; sufferers act out the movements occurring in their dreams... Erections of the penis (nocturnal penile tumescence or NPT) normally accompany REM sleep... In females, erection of the clitoris causes enlargement, with accompanying vaginal blood flow and transudation (i.e. lubrication). During a normal night of sleep the penis and clitoris may be erect for a total time of from one hour to as long as three and a half hours during REM." [wiki]

Which brings me to another point: sleep paralysis is often accompanied by vivid hallucinations, perceived loud noise, and sometimes an acute sense of danger.  So how does this work, if you feel that you are pinned to your bed, unable to move, feeling anxious, but at the same time you have a big stiffy under the covers?  What would your hallucination be?  Would it, perhaps, be that of a demonic lover, keeping you still by evil magic while taking advantage of your manly charms?  Conversely, imagine how confusing it would be if you were a staid Victorian lady who was pinned frighteningly to her bed while experiencing distinct stirrings in the night? 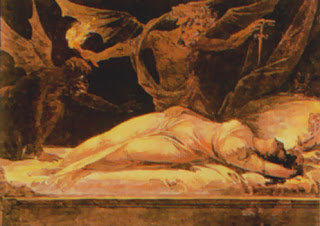 There was a great deal of debate as to these creatures' purpose in early Christianity, but the common debate was whether the demons had any reproductive capability, and were they using humans in order to reproduce (a la Rosemary's Baby).  It became commonly accepted that incubi and succubi were the same demon, changing shape: by taking female form, they were able to collect male sperm and then turn around and impregnate a human woman using their male form -- and the collected sperm.  The Malleus Maleficarum states:


"...to beget a child is the act of a living body, but devils cannot bestow life upon the bodies they assume; because life formally proceeds only from the soul, and the act of generation is the act of the physical organs which have bodily life... Yet it may be said that these devils assume a body not in order that they may bestow life upon it, but that they may by the means of this body preserve human semen, and pass the semen on to another body."

Why the baby conceived in this way is not simply a normal baby, no one seems to know; but in the Christian tradition, a baby conceived this way (a cambion) is usually wickedly smart and able to get people to do their bidding.  Some texts hold that a cambion does not exhibit breathing or pulse, but appears to be alive -- until they are seven years old, at which time they begin to appear more like normal people.  Caliban, from the Tempest, was supposedly a cambion, as was (according to some stories) Merlin. 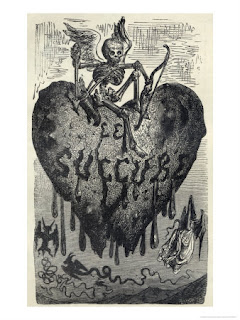 When the experience is not sexual it has still been attributed to demons or other supernatural presences.  The word nightmare, for example: mare in nightmare does not stand for female horse, but for mara, an Anglo-Saxon and Old Norse term for a demon that sat on sleepers' chests, causing them to have bad dreams.  In Newfoundland, the sleep paralysis experience is referred to as the "Old Hag," similar to the Night Mare: a creature who sits on the sleeper's chest while they sleep, making them helpless.  Similar stories can be found in Sweden, Fiji, Turkey, Chile, and many other places; one of the interesting things about sleep paralysis is that it is completely cross-cultural -- a product, simply, of being human.  Studies done in Canada, China, England, Japan and Nigeria found that 20% to 60% of individuals, across the board, reported having experienced sleep paralysis at least once in their lives.

Often, sleep paralysis is associated with narcolepsy, a disorder where emotional excitement makes the sufferer fall asleep.  More rare, but also associated with both sleep paralysis and narcolepsy, is cataplexy, a disorder that makes one lose control of muscles, either totally or partially, in muscle groups.  Thus, for example, one woman I know falls to the floor when she gets overstimulated -- but is famous for being able to set her glass on the nearest surface on the way down.  Common cataplexy responses are buckling at the knees, weakness in the arms, and lolling of the jaw; but the effect is brought about the same way that REM sleep temporarily paralyzes the muscles.

This makes me wonder about myths such as Rip Van Winkle.  Was he, actually, asleep the whole time?  Or did he have some kind of waking dream -- was anyone sitting on his chest, causing him to neglect his life and let his house and crops fall to overgrown ruin while he lay, unable to move?  (What about the guy in the song "Four Minutes of Two," who fell asleep waiting for his girlfriend and woke up to gigantic metal bugs?) 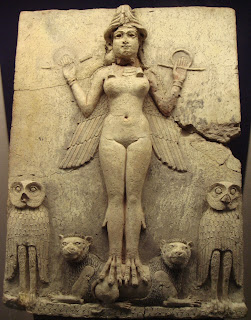 And lastly, in the spirit of things falling to overgrown ruin, here is a quote about Lillith, the demon/goddess/early feminist (depending on your source) -- whose origin can be found in Lilitu, the Babylonian demon described above.  The quote comes from the Bible's Book of Isaiah 34:13–15, describing the desolation of Edom:

"Her [Edom's] nobles shall be no more, nor shall kings be proclaimed there; all her princes are gone.  Her castles shall be overgrown with thorns, her fortresses with thistles and briers. She shall become an abode for jackals and a haunt for ostriches.  Wildcats shall meet with desert beasts, satyrs shall call to one another; There shall the lilith repose, and find for herself a place to rest.  There the hoot owl shall nest and lay eggs, hatch them out and gather them in her shadow; There shall the kites assemble, none shall be missing its mate.  Look in the book of the Lord and read: No one of these shall be lacking, For the mouth of the Lord has ordered it, and his spirit shall gather them there.  It is he who casts the lot for them, and with his hands he marks off their shares of her; They shall possess her forever, and dwell there from generation to generation." 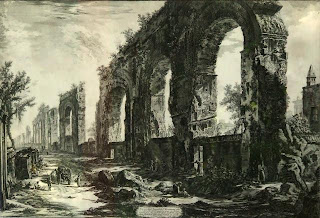 This is supposed to be about an accursed place, and the passage, in Old Testament tradition, shows that accursedness by listing eight different "unclean" -- possibly demonic -- animals (including the Lillith, apparently).  However, from my contemporary perspective the beauty of the description gives me chills; it looks to me more like a blessing.  In fact, there are places I would like to invoke this curse in the here and now.  Wouldn't it be amazing? 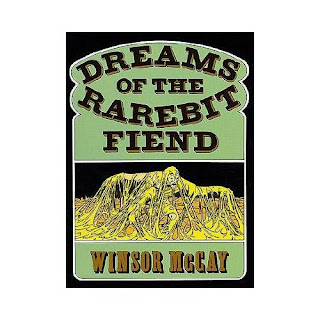 
- Windsor McCay's Dreams of the Rarebit Fiend, my favorite book on dreaming: hilarious and true to life, and drawn in the early 20th century.   Pay no mind to the poor design of the modern cover (unlike the cover of my edition, below); the inside is what matters.

What Ever Happened to Dog Carts?

I happened across this some time ago, at Terrierman's Daily Dose.  He has a large number of old photos of dogcarts all around the world; mostly they are carts for milk delivery or other kinds of small delivery, pulled by one or more dogs. 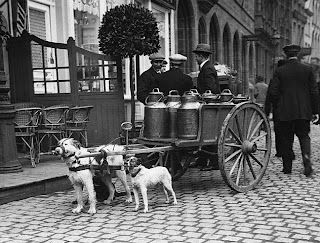 An example of a milk cart, full of canisters.  The unhitched terrier is probably a guard dog. 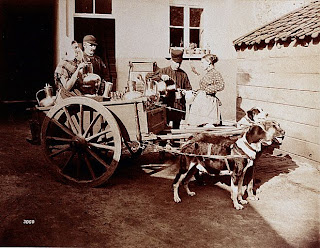 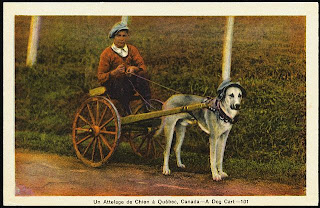 There are lots more pictures on his blog; check it out.  He is a great believer in working dogs; in fact, the blog is connected with his website about working terriers: his hobby or possibly profession is hunting groundhogs, foxes, etc in their holes using terriers (often the prey are caught around farms and relocated to wilder areas).
at 2/05/2012 2 comments: