Of Whales and Tourism and Ill Luck 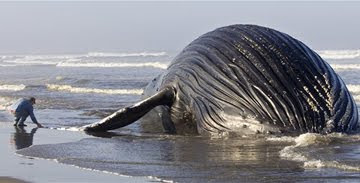 Disclaimer: Not my whale, just an amazing photo

A few days ago a blue whale washed up on a beach near where I live. We went to see her, all 86 feet of her; she lay in the sand of a little cove, upside down, with the great pleats underneath exposed to the world. Nearby lay the unfinished foetus which had been killed when its mother hemorrhaged after being hit by a freighter. Scientists from the marine lab had taken her pelvis, and removed the foetus (I assume) as part of their measuring. 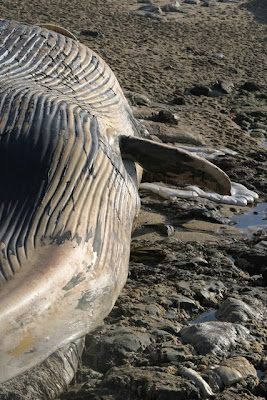 It was quite a stunning thing to behold. It looked almost unreal, like something made from plastic for a Hollywood movie. It was really hard to believe it was something which had been truly real and alive, swimming in the sea a few days or weeks before. The sand was soaked with whale-oil, and everyone who walked in it had to throw away their shoes afterwards, because the smell was literally impossible to remove. A local woman told me a blue whale had washed up fifty years ago and they had tried to move it with a giant lumber forklift; she said even twenty, twenty-five years ago the thing had still smelled. They'd been unable to ever completely remove it from the machinery.

Which makes sense; whale oil was one of the key original ingredients of Rust-Oleum protective anti-rust paint. If it takes 30 years to get the whale oil off a forklift, it must have been a mighty good anti-rust material. It is apparently a kind of liquid wax, and not a true oil at all (although the line between oil and wax is a very subtle one).

Whale oil is, of course, why most whales were killed in the seventeenth through the nineteenth centuries. Not only any old whale oil was useful but in particular sperm oil, from the head of the sperm whale, which contains spermaceti, "brilliant white crystals that are hard but oily to the touch, and are devoid of taste or smell, making it very useful as an ingredient in cosmetics, leatherworking, and lubricants." [wiki] Sperm whales also produce ambergris, a very special and mysterious substance which the whales secret in their stomachs to ease the passage of hard objects (like giant squid beaks):

"Ambergris has been mostly known for its use in creating perfume and fragrance much like musk. While perfumes can still be found with ambergris around the world, ...It was banned from use in many countries in the 1970s, including the United States, because its precursor originates from the sperm whale, which is an endangered species. However it has been legal since 2005 due to strict monitoring of distributors who ensure that only ambergris that has been naturally washed to shore is sold. Ancient Egyptians burned ambergris as incense ...The ancient Chinese called the substance 'dragon's spittle fragrance.' During the Black Death in Europe, people believed that carrying a ball of ambergris could help prevent them from getting the plague. This was because the fragrance covered the smell of the air which was believed to be the cause of plague ... some people consider it an aphrodisiac. During the Middle Ages, Europeans used ambergris as a medication for headaches, colds, epilepsy, and other ailments." [wiki]

The thing that struck me most was the feeling, looking at all the people who came out to see the whale, that nothing had changed: take away the jeans and sneakers, and you had an image straight out of an old engraving of the tourists going to see the giant beached sea beast. Compare these two images, if you will: 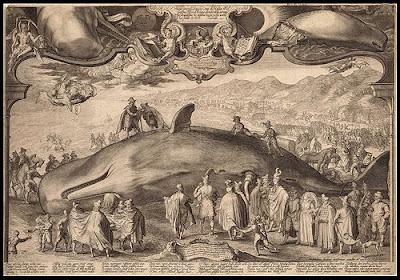 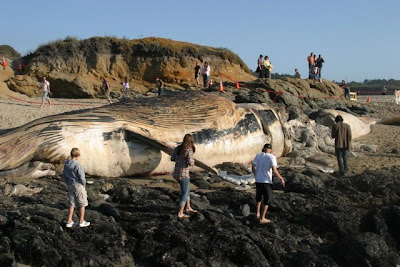 The lower one, of course, being my whale (thanks to Biblioddysey for the upper one).

There were some chunks of baleen (filtering teeth which the whale uses to catch krill) nearby, removed or broken out for I'm not sure what purpose. I took some pictures of them, once again impressed by how much of what had grown naturally seemed like something built, something incredibly engineered. The texture of the baleen was hard and resin-like, but ultimately fibrous, and the inner texture was sort of shredded into a hairy finish. The efficiency of this structure is extraordinary: the hard, slotted part lets the water out very quickly and the hairy inner part keeps in all the little food animals. 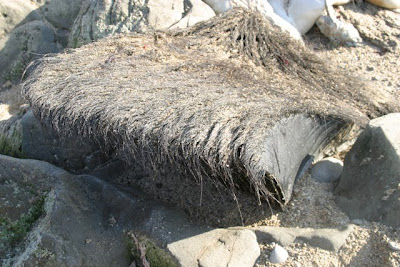 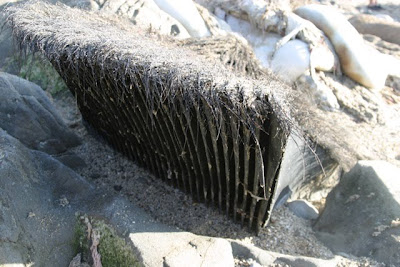 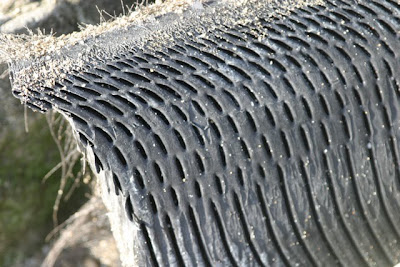 Whales are extraordinary creatures. Their sheer size is extraordinary, of course, but the way they have adapted, the incredible complexity of their biology -- the substances they produce, the structures of their bodies, even the way they interact, are all unique and difficult for us to really grasp, since they live in such a different environment from us. The mystique of whales is long-established, even when the tradition was to kill them if you could -- as you can see by any light reading of Moby Dick. Did you know, for example, that one newborn blue whale drinks one hundred gallons of milk a day, and by the time they are weaned weigh around twenty-three tons? Or that one blue whale can hear another's song across thousands of miles of ocean?


Sometimes, for whatever reason, they come up out of the sea to die, and we don't know why. People make extraordinary efforts to help whales who have beached themselves, sometimes in large groups. There are a number of engravings depicting the fascination people have with whales which have come up on the beach... 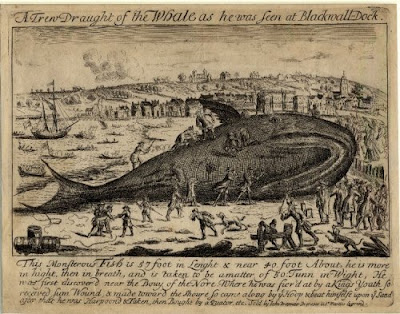 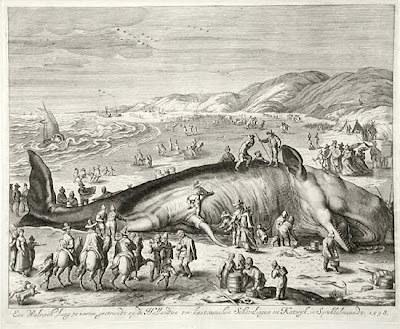 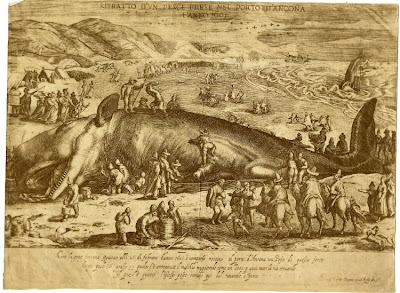 (Particularly, if you look closely, these people seem fascinated with the size of their penises).

Unfortunately, while there is a ban on whaling nowadays, many peoples don't go along with it. The biggest offenders (though there are several) in this controversy are the Japanese, who continue to whale for "science" in rather stunning numbers and whose whale meat seems to find its way into all kinds of lucrative places, under the noses of the regulatory bodies who try to keep track of these things. 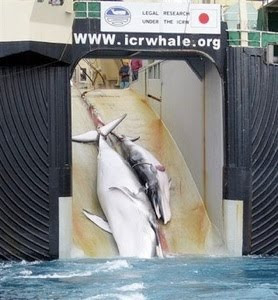 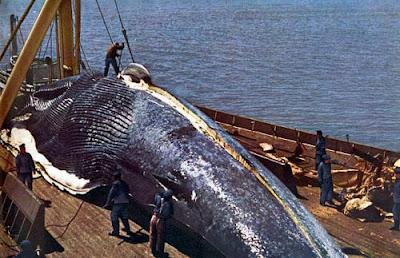 When I was a little kid, I remember people making fun, not of tree-huggers, but of people who supposedly went around with signs saying "Save the Whales." At the time, it seemed that the ocean's vastness was inexhaustable, and most people rolled their eyes at the way those animal-loving people talked about whale songs and the beauty of the pods moving through the water. But now, in the present climate of loss and depletion, these stories become more meaningful. Anyone who has been out in a boat and seen whales up close will attest: they are beautiful. The fact that such isolated creatures continue to talk to one another over great distances is amazing. Within their very bodies, they produce magical substances -- and structures -- which vie with some of our highest technology.

And their sheer size and power is, of course, staggering. 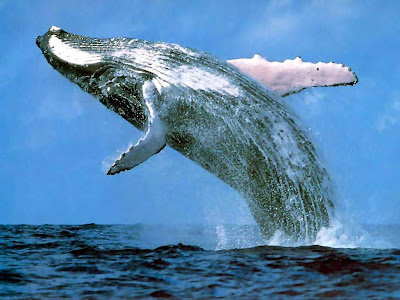 Ursula LeGuin: The Conflict and The Plot

I've been finishing one novel and starting another, so I'm in the mode of thinking about fiction lately. I seem to be able to either write fiction or non-fiction, but not both at once. Not easily, anyway.

Below are some words of wisdom from Ursula K. LeGuin, words that make me feel much, much better, because although I write stories, I don't always write about conflict per se. Sometimes, to me, there are better things to think about, and when people tell me that to make a successful piece of fiction I need to have plot! I need to crank up the conflict! then some part of me deep inside says, "Oh, yeah?"-- and I just can't shut it up. Like the title of the book this quote comes from (Steering the Craft), I have an internal guidance system which takes me where I must go. Perhaps as a result, I do have trouble selling stories: the nice comments from genre editors I've gotten is that the story is too slow, or that not enough happens. From the occasional literary editors, what I've heard is that because the story contains speculative elements, they can't use it (though I'm much more likely to get form rejections from literary editors).

I don't mind rejections, and I'm actually pleased that I'm getting comments and personalized rejections nowadays. Believe me, it is so wonderful to be getting these nice letters now, after all the years of form rejections; however, reading these words below, especially from one of the writers I most admire, makes me want to go on trying anyway. And the words make me want to turn back against the tide of pressure I've been floating in, the one that urges plot! plot! plot! perhaps at the expense of other things: they make me want to think again about the actual words I'm using, the phrases, the intricate, tiny narratives in tiny situations that fascinate me.

"I define story as a narrative of events (external or psychological) which moves through time or implies the passage of time, and which involves change.

"I define plot as a form of story which uses action as its mode usually in the form of conflict, and which closely and intricately connects one act to another, usually through a causal chain, ending in a climax.

"Climax is one kind of pleasure; plot is one kind of story. A strong, shapely plot is a pleasure in itself. It can be reused generation after generation. It provides an armature for narrative that beginning writers may find invaluable.

"But most serious modern fictions can’t be reduced to a plot, or retold without fatal loss except in their own words. The story is not in the plot but in the telling. It is the telling that moves.

"Modernist manuals of writing often conflate story with conflict. This reductionism reflects a culture that inflates aggression and competition while cultivating ignorance of other behavioral options. No narrative of any complexity can be built on or reduced to a single element. Conflict is one kind of behavior. There are others, equally important in any human life, such as relating, finding, losing, bearing, discovering, parting, changing.

"We don’t have to have the rigid structure of a plot to tell a story, but we do need a focus. What is it about? Who is it about? This focus, explicit or implicit, is the center to which all the events, characters, sayings, doings of the story originally or finally refer. It may be or may not be a simple or a single thing or person or idea. We may not be able to define it. If it’s a complex subject it probably can’t be expressed in any words at all except all the words of the story. But it is there.

"And a story equally needs what Jill Paton Walsh calls a trajectory — not necessarily an outline or synopsis to follow, but a movement to follow: the shape of a movement, whether it be straight ahead or roundabout or recurrent or eccentric, a movement which never ceases, from which no passage departs entirely or for long, and to which all passages contribute in some way. This trajectory is the shape of the story as a whole. It moves always to its end, and its end is implied in its beginning.

"Crowding and leaping have to do with the focus and the trajectory. Everything that is crowded in to enrich the story sensually, intellectually, emotionally, should be in focus — part of the central focus of the story. And every leap should be along the trajectory, following the shape and movement of the whole."

I'll leave you with that taste in your mouth, rather than even trying to reach that level of eloquence. Phew.
at 11/22/2010 1 comment: