They Say of the Acropolis...

I really, really try not to just pass on stuff that's floating around the Web, but this literally had me in tears. I don't laugh easily, or at least not like this. I do love Gilbert and Sullivan.

There is also, apparently, a movement afoot to get Stephen Fry knighted. Too late to sign the petition, though.

In the comments they wonder why American TV always cuts this kind of wonderful stuff out. Good point.
at 9/25/2008 6 comments:

I bought these in a flea market in France this summer. I think they're wonderful. La Mongolfiera means "the [hot air] Balloon" in Italian. What they were doing in France, and whether they were even really antiques, as the man was implying, I don't know - and I probably don't care. They're really fun, and that's enough for me. Click on them for more details... 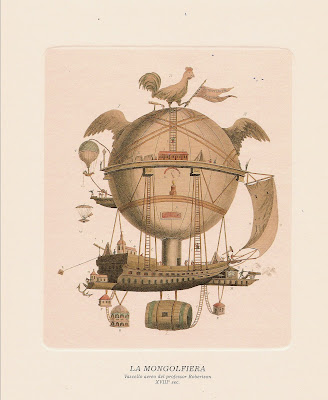 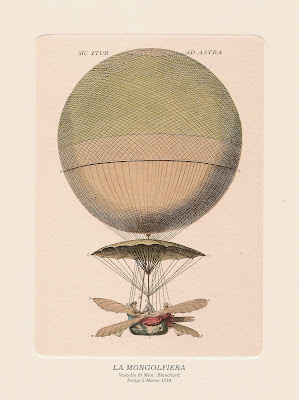 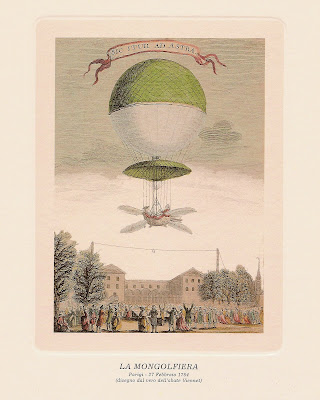 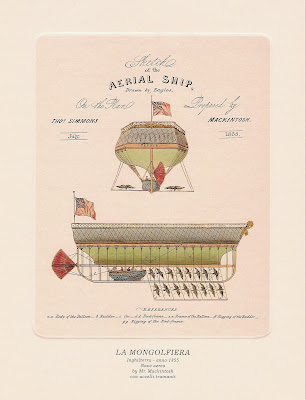 And thanks to peacay, over at Bibliodyssey, for this link to a flickr set taken of sketches from Lyon, France - the best of which peacay himself showcased in his recent "Collected Miscellany" post. Marvelous.
at 9/20/2008 10 comments: 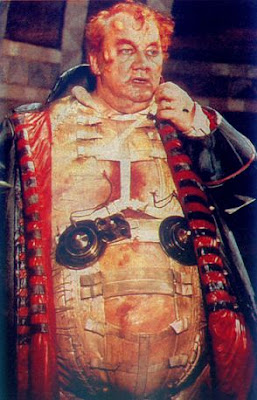 This past two weeks I've been suffering from what may be Giardia (warning: don't click and read if you're squeamish). It's a mild case, without the really horrific symptoms, but it has affected my self-image: giardia makes you bloated, dyspeptic, and flatulent, like the icky Baron Harkonnen (above) in David Lynch's Dune (but minus the pustules). Feeling like a gross person has made me really rethink the way we tend to associate the ugliness of the body with the ugliness of the mind: because I feel gross, I worry that people who don't know me will think I am a gross person. As a result, I've been hiding.

This idea that the corruption of the body is a manifestation of the corruption of the soul or the mind has a very long history, and is clearly a difficult idea to shake. Susan Sontag notes that language used by contemporary society implies a "blame the victim" mentality, as if the victim is the creator of his or her own illness; but historically, the victim is the disease, and the pauper is poor because that is their destiny, the place they have been put for some hidden sin. The divine right of kings, manifest destiny and the Calvinist doctrine of predestination are three big expressions of a deep-seated belief that quality of life is an expression of divine will, that people who suffer - or do not - do so because they inherently deserve their destiny. 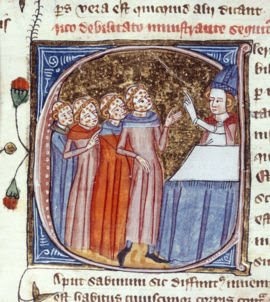 But on an individual level, the superstition goes deeper than that. The shunning of sick people, while evolved as self-preservation, often carries over into the shunning of people who have been disfigured by illness. Birth defects, when they showed up, caused much signing against the Evil Eye, muttering about what sin the mother had committed for the wickedness to show up in her child, and/or discussion of who in the village might be a witch. When Christ embraced the sick and deformed, actually touching them and welcoming them into his hearth, there was probably a huge number of the populace who were horrified that he would associate so with the evil and the impure: really a revolutionary moment, which like all revolutionary moments either opened peoples' minds or closed them. 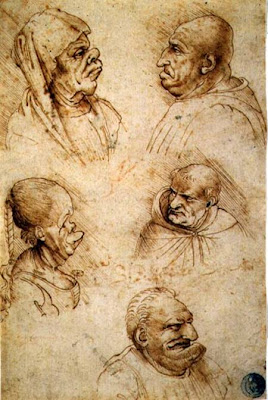 Leonardo da Vinci was well-known for following people with odd facial features, and then going home to draw them, sometimes putting them together to make wildly creative faces. However, his fascination with the anomalies of the human form was actually typical of Rennaissance humanism: the belief that people can determine right and wrong - or the cause of events - using universal human qualities, such as rationality, and the rejection of transcendental reasoning, such as "God is punishing your wickedness by giving you the pox." Leonardo, famous now for his beautiful paintings and excellent "inventions", was at the time considered a difficult man, poor on follow-through and liable to try some new (and impermanent) type of paint for a commission. And he really didn't care much what people thought of him, or whether someone was evil inside. 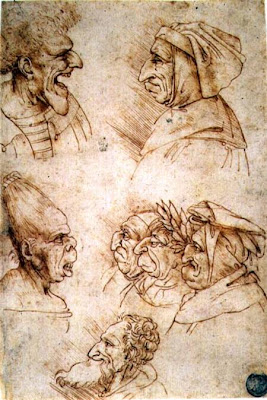 Shakespeare's Richard III is a fine example of the reverse of this: although there is little evidence that Richard III was lame at all, Shakespeare, who knew his audience, made sure that they were reminded, at every moment, of how twisted the character really is by his imposed lameness. Dickens, the master of melodrama, also relied heavily on his villains' facial features, bent bodies, scars, and even modes of dress to signify their real natures - despite the fact that, at the same time, he advocated an approach to poverty and misfortune which claimed that it was not always the unfortunates' fault, and that charity and opportunity were required from those who were better off:

"Dickens's second novel, Oliver Twist, shocked readers with its images of poverty and crime and was responsible for the clearing of the actual London slum that was the basis of the story's Jacob's Island. In addition, with the character of the tragic prostitute, Nancy, Dickens "humanised" such women for the reading public; women who were regarded as "unfortunates," inherently immoral casualties of the Victorian class/economic system." [wiki] 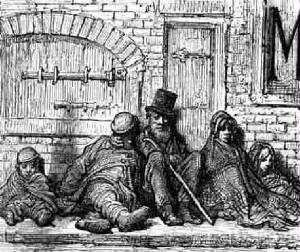 This popular change in attitude had begun in the late 1700s and grew, on through the 1800s, until by 1869 "In London alone there were about seven hundred philanthropic societies, devoted to every conceivable human misery or affliction." [link] People like E. Nesbit, H. G. Wells, and George Bernard Shaw joined the Fabian Society, dedicated to chipping away at the status quo and introducing ideas for changing society, trying to get at the causes of suffering: the Victorians were great ones for the notion of "Gain all you can, save all you can, give all you can", a perfect motto for the Industrial Revolution, when so many people were getting rich on the backs of increasingly miserable labor, allowing the rich to continue to do so, while ameliorating their guilt by telling them to help those whom their gains have made miserable along the way. 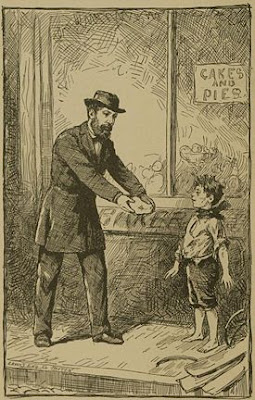 Alongside all this, in the scientific world, the evolution is toward "once a character flaw, now a diagnosable illness." Think, for example, of the relatively recent changes in thinking on alcoholism and depression, which are now regarded as, respectively, genetic and largely chemical. ADD children are no longer treated as "bad" children, and even those people who shout obscenities are found to have Tourette's Syndrome. It seems that nearly everything is diagnosable, and the only person for whom we don't feel some sympathy is the total sociopath who kills four hundred people while looking like a CPA.

Which is probably why there are so many shows on television now about serial killers. Like the Victorians, our society seems to have become obsessed with one particular type of villain, and we play it over and over; we can't get enough.

This brings us full circle, for several reasons. One is the recent interest in more traditional stories, and the archetypical, corporeally ugly baddies found in places like fairy stories and myth. Neil Gaiman's witch-queen in Stardust, who is old and ugly but artificially remade to her former beauty, is a nice re-take on the traditional evil witch disguised as beautiful lady (and Diana Wynn Jones' Howl's Moving Castle does a wonderful flip on that same theme). Heath Ledger's horrific Joker blows its counterpart - the mad, scarred villain of melodramas - completely away, partly because he plays brilliantly off the scientific take on mental illness: he tells contradictory stories of how he got his scars, and we are given a terrifying glimpse of our own "not his fault" trope from the other side of the chasm. 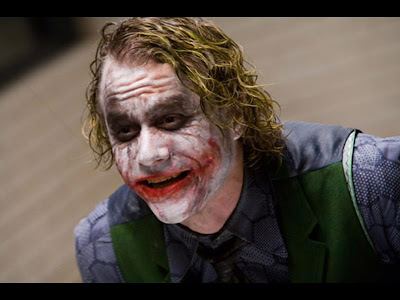 Another reason why we are coming full circle: in an era where evil can be diminished to a diagnosable illness, how do you represent the time-honored role of the villain? How can storytellers supply that need for darkness, with which to showcase the Light? Aside from resorting to faceless villains, such as Sauron or the Tripods in War of the Worlds, who simply seem to represent Evil in a sort of blanket way. And setting aside the less-intellectually satisfying slasher movie/serial killer genre.

One answer right now seems to be about looking backward at older villains. The Lemony Snicket books, for example, are a perfect, tongue-in-cheek take on Victorian melodrama; or the recent comic-book movie trend: Batman, Iron Man, and V for Vendetta, to name just a few; or the remakes of myths like Beowulf. 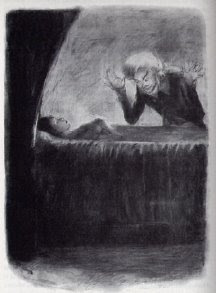 Another answer seems to be to take the tools we have to hand, and, in our increasingly complex world, come up with increasingly complex villains, who at times are not always easily identifiable as such. Even the backwards-looking examples above are re-made with less surety about Right vs. Wrong; and in books like the Golden Compass and Jonathan Strange and Mr. Norrell, it is never clear about the Bad Guys - their badness is a of a strange, ambivalent type - even though the heros must eventually go against them in order to survive, complete their quest, or save the world.

In a world where artificially-created beauty and power over our health are increasingly expected, we and our children are bombarded continuously by the idea that beauty and health are not a gift, but a necessity, and if we do not have both, we have only our own shirking of responsibility to blame. As a result of this, we are the bad guys, those of us with scars, missing parts, or illness, who don't work hard enough to hide our flaws. Like the witch-crone who looks nice on the outside, we know we are bad, and we hope no one else ever finds out.

"Illness is the night-side of life, a more onerous citizenship. Everyone who is born holds dual citizenship, in the kingdom of the well and in the kingdom of the sick. Although we all prefer to use only the good passport, sooner or later each of us is obliged, at least for a spell, to identify ourselves as citizens of that other place."
-Susan Sontag, Illness as Metaphor

The Swedish government's truly amazing little demo on how retouching changes what we see - highly recommended. Wait for the star to appear, then click on it.

Where to find Charles Booth's bogglingly wonderful poverty maps of London in the 1880s to 1890s (see image, below) 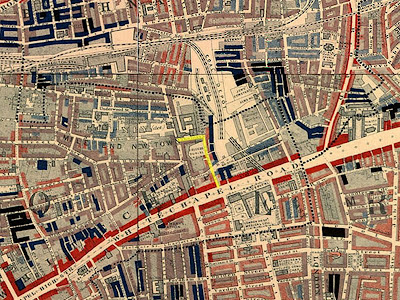 The Gears of Destiny 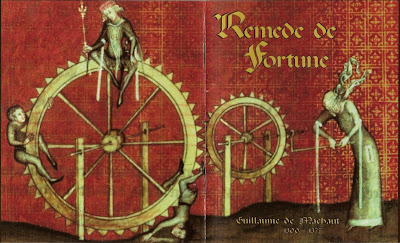 I stumbled on this wonderful image while walking through a music store: it appears to be blindfolded Fate, turning the Wheel of Destiny by means of a very simple, but possibly painful, gear mechanism. The guy on top is clearly... well, on top, holding a scepter and wearing nice clothes. The guy on the left is clearly trying to get up to where the upper guy is sitting. The other guy... I worry about him. Those teeth look sharp, and it seems he might have just come out from a rather unpleasant place.

The CD is a piece by Guillame de Machaut, who lived in the 1300s, and is put out by Ensemble Project Ars Nova, who do all kinds of interesting things, finding all kinds of ancient music and playing them well.

If anyone knows where this image comes from, I'd be indebted for the information; it is unfortunately not credited on the CD. I can always hope there are more like it...
at 9/10/2008 8 comments: