Virus is a Knowledge

Much apologies, although I've theoretically been back from hiatus for awhile, I've also spent some weeks sick as a dawg with a horrible lung infection. I am getting better, and as soon as I can get things back in order a bit, I'll be writing more! Promise.
at 3/30/2010 7 comments: 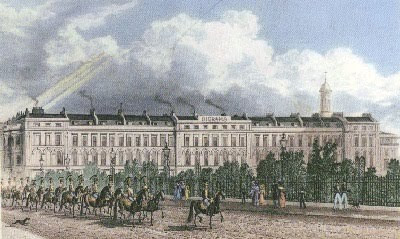 Long, long ago, Nicholas Clayton wrote in to tell me this:

"Going off-post to point you to something that should intrigue any enquiring mind that is prepared, as yours evidently is, to be delighted. I can't find any note of it in your blog: the London Diorama.
Sitting in a taxi I saw the name blazoned on the pediment of the Nash terrace at Park Square East. This led to a fascinating article (The Diorama in Great Britain in the 1820s).

And the Diorama structure of building is still there behind the facade as can be seen on the Google satellite view [see picture]. I have yet to visit to find out how accessible it is to the public." 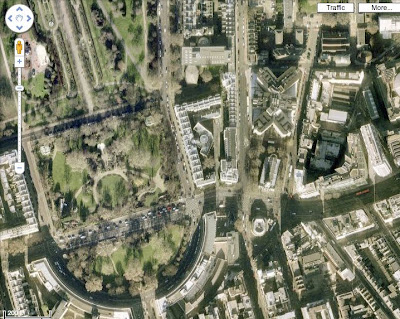 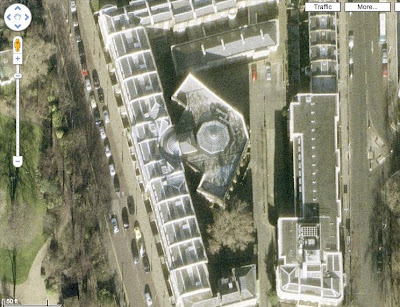 The diorama was a sensation in the early 1800s, the brainchild of Louis Daguerre, as in (you guessed it) the daguerrotype. Having apprenticed in architecture, theater design, and panoramic painting, M. Daguerre was a natural talent with a true skill for theatrical illusion. He became famous for his electrifying theater design, and at the age of 35 opened his first Diorama in Paris in July 1822.

"...the Diorama was a theatrical experience viewed by an audience in a highly specialized theatre. As many as 350 patrons would file in to view a landscape painting that would change its appearance both subtly and dramatically. Most would stand, though limited seating was provided. The show lasted 10 to 15 minutes, after which time the entire audience (on a massive turntable) would rotate to view a second painting. Later models of the Diorama theater even held a third painting.

The size of the proscenium was 24 feet (7.3 m) wide by 21 feet (6.4 m) high (7.3 meters x 6.4 meters). Each scene was hand-painted on linen, which was made transparent in selected areas. A series of these multi-layered, linen panels were arranged in a deep, truncated tunnel, then illuminated by sunlight re-directed via skylights, screens, shutters, and colored blinds. Depending on the direction and intensity of the skillfully manipulated light, the scene would appear to change. The effect was so subtle and finely rendered that both critics and the public were astounded, believing they were looking at a natural scene." [wiki]

Here is part of a review of one of the dioramas shown in London, from The Times, 4 October 1823:

“The warm reflection of the sunny sky recedes by degrees; and the advancing dark shadow runs across the water – chasing, as it were, the former bright effect before it. At the same time, the small rivulets show with a glassy black effect among the underwood; new pools appear which, in the sun-shine, were not visible; and the snow-mountains in the distance are seen more distinctly in the gloom. The whole thing is nature itself; – and there is another very curious sensation which this landscape-scene produces on the mind. The decided effect of the thing is, that you look over an area of twenty miles; the distant objects not included. The whole field is peopled: a house, at which you really expect to see persons look out of a window every moment – a rill, actually moving – trees that sem to wave.

You have, as far as the senses can be acted upon, all these things (realities) before you; and yet, in the midst of all this crowd of animation, there is a stillness, which is the stillness of the grave. The idea produced is that of a region – of a world – deserted; of living nature at an end; – of the last day past and over. Silence, in spite of Ariosto, seems to have found a resting-place – nay, at last, an empire – upon earth.” 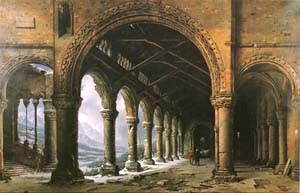 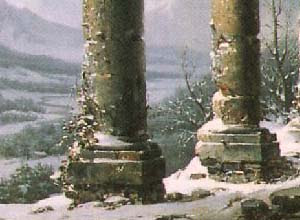 The diorama in London was built the year after the first one in Paris, in 1923.

I did a bit of web-burrowing and came up with this information:

Arthur Gill (who throughout the 1960s and 1970s wrote a regular column in The Photographic Journal of the Royal Photographic Society) recorded an account of a visit he made to the Park Square East/ Peto Place building at a time when it was empty in the mid–1970s. He found what seemed to be the remnant of a filled-in well of about twelve feet (3.7 metres) diameter which he thought was originally used to contain the turning shaft on which the Diorama saloon had turned. A few years before, when the building housed a department of the Middlesex Hospital, the well had been filled with warm water and used for hydrotherapy of disabled patients. Mr Gill explored fully the empty building and “tried to imagine what the aspect would be like if the circumferential rooms and offices were absent... However, try as I would, my imagination was unable to sweep away the modern amendments and adaptions, and recapture the Diorama. Except for that concrete–filled well ... everything has gone beyond recall”. (Arthur Gill, ‘The London Diorama’, History of Photography, January 1977, Vol. 1, No. 1, pp.31-36)

In the early 1990s it was being used to house the Diorama Arts centre, but later it became part of the national headquarters of The Prince's Trust charity. Lord knows what's inside the structure now.

Daguerre went on to build other dioramas, the last one being a diorama in a church in Bry-sur-Marne, just outside Paris, where he lived. Last time I was in France I tried to get there because they still have one hanging in the church; but apparently it was poorly restored over the years, and now they are trying to restore it from the restoration, so to speak, having lost a good deal of the transparency and effect in the previous restoration.

Daguerre, of course, was fascinated by visual representation in all forms, and ways of reproducing the reality of the world in a more permanent, frozen form. It was not surprising, then, that he became involved in the first photographic process:

In 1822 Joseph Nicéphore Niépce produced the world's first permanent photograph (known as a Heliograph). Daguerre partnered with Niépce three years later, beginning a four-year cooperation. Niépce died suddenly in 1833. The main reason for the "partnership", as far as Daguerre was concerned, was connected to his already famous dioramas. Niepce was a printer and his process was based on a faster way to produce printing plates. Daguerre thought that the process developed by Niepce could help speed up his diorama creation.

Daguerre announced the latest perfection of the Daguerreotype, after years of experimentation, in 1839, with the French Academy of Sciences announcing the process on January 7 of that year. Daguerre's patent was acquired by the French Government, and, on August 19, 1839, the French Government announced the invention was a gift "Free to the World."
Daguerre and Niépce's son obtained a pension from the Government in exchange for freely sharing the details of the process.

The Wikipedia article on dioramas says that Daguerre was a manufacturer of mirrors, which is interesting for several reasons. One is that the plates on which the daguerrotypes were developed used a silvered surface; another is that his cameras depended on taking the light that came through the camera's lens and reflecting it with a mirror onto the plate, very much like a camera obscura. He never developed this camera much, and depended on this same essential concept for his patent. All part of the smoke and mirrors of good theatre, I suppose. 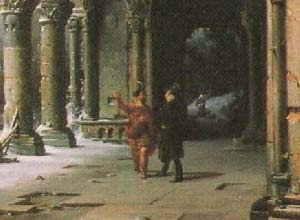