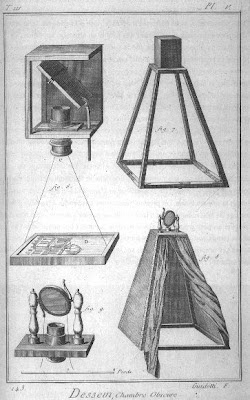 My first introduction to the mysteries of the Camera Obscura were during my youth in San Francisco: there was this cultish secret, called the Giant Camera, visited by unknowing tourists and in-the-know locals, down behind the Cliff House next to the Musee Mechanique (which I promise to discuss in a future post). It was run by this one slightly odd man and housed a number of rather stilted, but still interesting, holograms around the edges of the room. At first, walking inside the darkened space, one would bumble blindly over to the dim white disk in the middle of the room - and then be arrested by the most indescribable sight.

Like many of the large camera obscuras, this one's image was projected onto a large (at least 4 feet wide) smooth, white concave disk set like a high table in the middle of the room. The image was collected via a hole in the ceiling with a rotating mirror, which "captured" what was happening outside in a slowly moving progression, and beamed it down, probably via a lens or several lenses, onto the table. The mechanism in this particular camera obscura was hidden (and not particularly pretty if you did see it) under black paint and cloth; only the image, apparently floating weightless in front of you, was clear and perfect. Camera Obscura in Cadiz, thanks to Sinden Optical (see below)

Camera obscuras work under the same principles as pinhole cameras: you make a small hole in the side of a box (either a real box or a room-sized box) and the light outside will get in through the hole and project itself onto a piece of paper or a wall, showing you a perfect image of the scene on the outside of the box. Because light travels in a straight line, and because the hole is small, the light on one side of the scene will have to come through at an opposing angle from the light on the other side of the scene. Therefore, the lines cross in translation and are projected upside down. Here is a nice simple Flash demonstration, if you need visuals.

The upside-down image can be righted using a convex speculum (a small metal mirror used for telescopes) or lenses, or the opening can be enlarged and fitted with one or more lenses, which focus/broaden the light and can also correct for image reversal.

The thing that makes watching the image in a camera obscura so magical is that there is no grain. We are all used to seeing movies and photographs, and taking it as a given that they are pretty much clear and accurate representations of what we see. But once you have seen a camera obscura, you will throw all that out the window, because the image is impossibly clear. You can see the eyes on the seagulls flying by outside, no matter how far away they are. All the meshing gaps and bubbles in the foam of the sea is there, complete and clear. You can see the cracks in the buildings, the open fly of the tourist on the balcony above you. Looking at film is never really the same again.

And no wonder: you are having the real world projected into the room with you, like a movie. It's stunning.

My second brush with camera obscuras was in a story called - you guessed it - Camera Obscura, by Basil Copper. Despite its slight whiff of antisemitism, which I will leave where it lays, the story manages to convey a curious creepy magic in the thing's mechanisms, playing with the idea of the projection being real and the real merely the projection. It was this story which, for me, placed the device into the realm of the fascinating, full of velvet curtains, silken pull-ropes and unseen brass mechanisms.

Lastly, I had a friend whose bed was high in a loft on the second story of a rather tall Victorian house. In an effort to sleep at night despite the streetlight directly outside, he installed a dark paper blind over the window, the upper half of which projected into the loft.

One day, I was sitting in his loft while we discussed some long-forgotten subject, and I happened to glance up at the ceiling. There was a perfect reproduction of the street below, running in a strip along the rounded edge where the walls blended seamlessly into the ceiling. Apparently the installation of the blind had left a narrow crack along the top, which allowed the reflected scenes from the outside world to become projected onto the ceiling above. Needless to say, we spent many hours after that watching pigeons, dogs, cars and the tops of passers-by as they walked past.

Since then, of course, I have found out much about the history of the things. Leonardo DaVinci mentions the device, among other people. A muslim scholar named Abu Ali Al-Hasan Ibn al-Haitham (965-1039 CE) is credited with, if not outright discovering the phenomenon, at least leaving notes behind as to how it works. You can find out more about the history of camera obscurashere, or if you are really obsessed, the 1910 Encyclopedia Brittanica has more than anyone could possibly want to know about the history of the theory behind the device, the optical parts of it, and the uses of it. Heady stuff, that.

There is a great deal of evidence that artists during the Rennaissance and later used camera obscuras to look at their subjects in a different, more compositional way. Many of the artists who did this did it discreetly, either because the device had an occult association (Giovanni Battista della Porta, in the 16th century, was brought up on charges of sorcery after inviting visitors to a camera obscura show), or because the artists worried that people would think less of their paintings as a result. Vermeer, for one, shows many signs of having used the device for his paintings. Things show up in his compositions that we take for granted as normal because we are used to looking at the world through lenses. For example, some figures are grossly enlarged in the foreground, not something people thought of much before photography; the way things shine have a quality of being seen through a lense; and the way he didn't work up his paintings via layers the way most artists did, showing an obsession with light and shadow, is nearly a dead giveaway.

(On a side note, if you have not seen Colin Firth and Scarlett Johansson in Girl With a Pearl Earring, you should. Whew!) 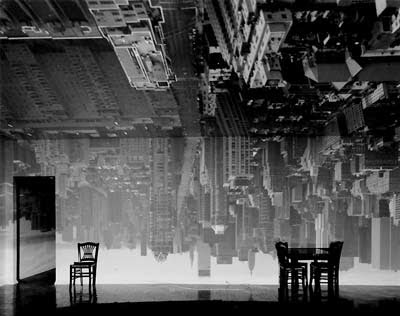 Lastly, I'd like to point out the really beautiful work of Abelardo Morell, who creates amazing visions by blacking out windows and leaving a pinhole opening in one of them. When he photographs the room with its furniture, and the particular outside environs superimposed onto it - which are, of course, carefully chosen - the results are quite lovely and ephemeral. He has a book called (of course) Camera Obscura, a collection of his photographs. 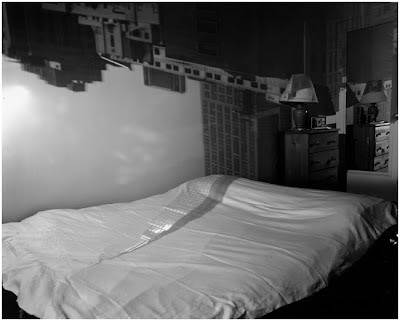 And of course, we have some links for you:

- Jack and Beverly Wilgus' site on all things camera obscura has all kinds of stuff in it.

- Perhaps you'd like to have your own? Try Sinden Optical Company, makers of large camera obscuras.

- Or you can make one yourself, courtesy of Tim Hunkin's wonderful illustration of a camera-obscura-on-the-cheap, courtesy of Todd Roeth's very comprehensive online photography class for Brooks Institute of Photography in California.
at 5/14/2007

Very cool! You can actually buy a smaller version of these room camera obscuras here: http://ancientmagicarttools.com/cabinetobscura