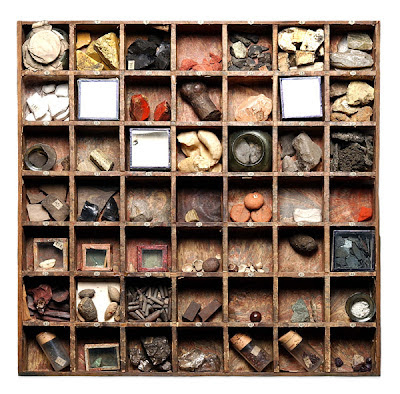 Thanks to akacurator for telling me about Wonder Cabinet, a community of Wunderkammer-lovers. On a tip from romeodistress, at said community, I looked into the British Museum's Enlightment exhibition (which seems to be ongoing since 2003). The new-ish room that houses it, the King's Library, is apparently set up pretty much as a Wunderkammer itself.

Here is what the Museum itself has to say:

"The physician Sir Hans Sloane and his contemporaries collected natural specimens, beautiful sculptures and ‘exotic’ objects from around the world. He created an encyclopedia of the world in one place, and after his death in 1753 his collection became the British Museum – a ‘universal museum’ for the people of Britain and visitors from around the globe.

Founded by an Act of Parliament in 1753, the British Museum was the first free public museum in the world, intended ‘not only for the inspection and entertainment of the learned and the curious, but for the general use and benefit of the public’. It was thus one of the most potent acts of the Enlightenment and at the same time one of its greatest achievements.

Its founding collections were rapidly supplemented. Captain James Cook, Sir Joseph Banks and many others made extraordinary voyages, returning not only with objects, but also with drawings and accounts of people’s customs and ways of life from distant lands. Sir William Hamilton formed an amazing collection of classical antiquities from southern Italy. King George III himself had an superb collection of scientific instruments. They wanted to understand, and use that knowledge to improve their world. Through their activities new disciplines were born: taxonomy, geology, palaeontology, archaeology, the history of art and ethnography, to use the labels that would soon be applied to new areas of study. In this way the eighteenth century laid the basis for the way future generations and we today would understand their own worlds."

It's not often that one gets to see a properly assembled Wunderkammer in the flesh. I'm looking forward to visiting it next year when I'm in London!
at 5/09/2007