Reliquaries: Saints Preserve(d for) Us! 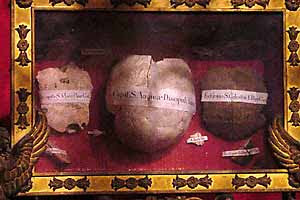 Reliquary of St. Anania, Rome. St. Anania is said to have been the disciple who baptised St. Paul the Apostle.

I first discovered reliquaries on visiting Italy, years ago.

Since then, I've seen a lot of reliquaries, in France and other countries, but it was that first time, in the Cathedral Museum in Florence, that I saw the best reliquaries of all. There was a hand-shaped reliquary containing an arm-bone (of St. John the Baptist?), which pointed at the sky just like John the Baptist is always shown doing. There was a philatory (a transparent reliquary) which contained all the bones of another saint, whom I've forgotten, but the bones were stacked in an asthetic way and wound with gold and pearls in a shrine (reliquary shaped like a house) made of glass and gold. There were dozens of the usual cross-shaped reliquaries and lots of wonderful, dangly, crown-shaped ones. 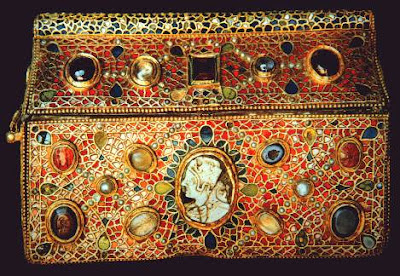 "Casket of Teudericus" reliquary from the second half of the 7th c. (?) (Canton Valais: Saint Maurice Abbey treasury). This reliquary is a product of the monastic workshop of St. Maurice d'Agaune. Signed by the artist and dedicated by the Priest Teudericus to the monastery. Gold cloisonné, gemstones, and cameo on wood. 5.25"

For a nice, clear explanation of the reliquary concept I'm going to quote the Virtual School, a defunct part of the EC's European Schoolnet site, which is a portal for lower education in Europe. It has the most dazzling array of useful information I've come across. If you want something explained well and simply, I have not found better than European Schoolnet; unfortunately, I never seem to come across what I need except by accident. 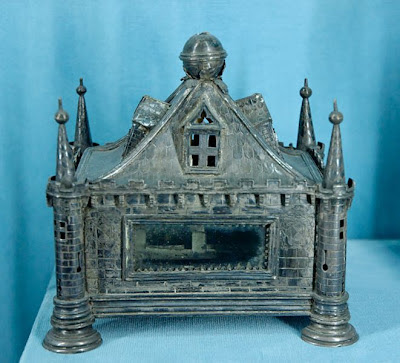 "Relics are holy objects associated with holy people, and is prevalent in Judaism, Buddhism and Christianity, among others.

"In a world where people believed that evil and the Devil existed all around in the natural world, it was comforting to believe that good was also something that could be seen and touched. The motivation for most pilgrimages was to see and touch something holy and consequently benefit from being in contact with good.

"Brandea were the most common kind of early Christian relic in the centuries immediately following the death of Christ. These were often ordinary objects which had become holy by coming into contact with holy people or places. These might include, for example, pieces of tomb, a handkerchief of a saint or dust from the Holy Land.The advantage for pilgrims was that they could and did make their own brandea; by rubbing a piece of cloth against a holy tomb or by filling a small flask (ampulla) with holy water, they could take the holiness home with them.

"Early relics were often carried in small, purpose built containers called reliquaries which were hung around the neck, almost like good luck charms.

"Bodily relics were particularly important because the spirit of the saint was said to actually remain in the bodily remains. Wherever the body (or body parts) went the (holy) spirit was sure to follow. There were some religious critics who suggested that the cult of relics owed more to pagan traditions than Christian teaching, but such was the popularity of the relics and the miracles that surrounded them, it would have been very difficult for the Church to resist even if it had wanted to.

"In converting pagan people the Church needed every trick in the book. In the 13th century, even the great medieval philosopher and saint, Thomas Aquinas, produced a threefold defence of the cult of relics. He argued that, firstly, the relic acts as a physical reminder of the saint, making it easier for people to understand the importance of the saint. Secondly, because the saint worked miracles through the body, the body remains holy and is therefore valuable in itself. Finally, because miracles occur at sites with relics, God must approve of the preservation and worship of relics. 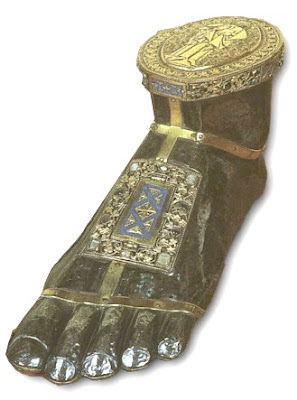 Foot reliquary of St. James, Namur, France
"The only way of guaranteeing yourself a widely acknowledged, 'authentic' relic was to steal one. Many of the most famous pilgrimage sites in Europe included stolen relics in their collection. The theft was easily justified. Often the idea for the theft came in the form of a dream or vision, which was widely considered to be the way God and saints communicated . Often the saint itself decided. If the saint allowed itself to be taken without punishing the thieves and if the saint continued to produce miracles, then clearly he or she was happy in their new home." 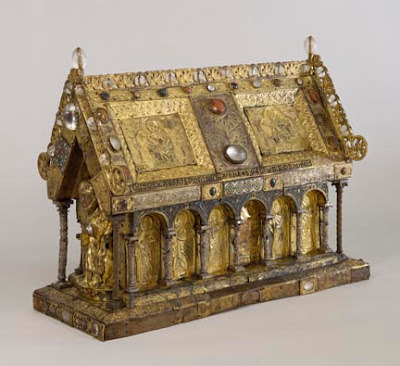 If you've ever read P.D. James' A Morbid Taste for Bones, you'll know that many saints' bones were essentially stolen from their home tomb to begin with, regardless of the locals' feelings about it.

Strangely, Galileo's middle finger is displayed at the Science History Museum in Florence inside a beautiful reliquary (below). Does this mean he was a Science Saint? He was definitely a hero and a martyr to his beliefs, and it's interesting that he is celebrated in the same way as a religious figure. The finger was detached from the body by Anton Francesco Gori (how apt a name) on March 12, 1737; it is not clear whether this was a sanctioned move or not. And, of course, given the way he got in trouble for bucking the establishment, I find it intensely ironic that it was his middle finger they saved. 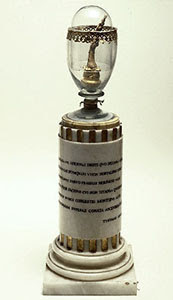 In any case, if you ask nicely I might show you some of the reliquaries I've made. There are quite a number, mostly (with one excellent exception) celebrating, not saints, but animals, which at one point in my life I was seeing as Saints of Nature, martyrs to the Cause of Progress - particularly those killed by poison and other dangers of modern life (and then mummified with time). Bwa-ha-ha. My thoughts have evolved, but the reliquaries remain.
at 5/16/2007

I am so sorry, the link for the comments simply did not show up for this post! I had to completely republish it.

Here’s d’s comment:
There is a wonderful relic in St. Stephen's Basilica here in Budapest. Known as the Holy Right, it is the shriveled right hand of St. Stephen clutching some royal jewels for all to behold. In August they take it out and parade it through the streets. People go wild. You have a wonderful blog, keep up the good work.

And thank you all for reading it!

As a medievalist, I am a great fan of relics. I have a Jesuit friend (also a medievalist) that occasionally has people over to his church for an "ostensio reliquarum": a showing of relics. I myself have was is reputed to be a relic of the true cross.

As far as relic theft in the Middle Ages, I recommend Patrick Geary's Furta Sacra.

This is a great blog, by the way.

This is a fantastic article, that I'm featuring in Musecrack.

And I'd love to see your reliquaries to the Saints of Nature as well.

I'd like to note there are some great comments on Musecrack's post about it. Very cool. Thank you!

Great post - but then they're all great posts. I'm enjoying catching up with your blog very much! I had no idea about Galileo's middle finger, but it is indeed apt. And I think the "Science Saints" ought to be either a band or a social club.

Fantastic blog, I spend hours perusing - I'm also a fan of reliquaries, was brought up in Italy and have seen many over the years. I have a collection of photos surreptitiously taken whilst the priests weren't looking! and I also make my own. I'll show you mine I you show us yours!
Please?
Lux x