One of the little-known wonders of San Francisco, the Musee Mechanique spent many years hidden underneath the Cliff House, next to the Camera Obscura. It seemed to be open at odd hours, and so visits were sort of rare and exciting. It is the privately-owned collection of Edward Galland Zelinsky, who began collecting at the age of eleven, and went on collecting to this day. He is the proud owner of a rare steam-powered motorcycle (see below), built in about 1912 by a man named Gillingwater (on display in the Museum).

He says "I seldom sell, but I love to trade."

The thing I particularly like about the objects in the Museum is that they have this amazing patina of age and wear, and yet you can still see quite clearly how they must have appeared when they were new. Some of the things appear kind of cheesy on the outside, but in reality are quite strikingly innovative in their mechanisms. A number of really complex automata are there, going incognito under a layer of funky papier-mache and dusty wear-and-tear. Among other things, you can find the Bimbo Box, a band of clockwork monkeys playing to a recording of Herb Alpert's "Tijuana Taxi"; the "Naughty Marietta" Cail-O-Scope, which is a sort of stereoscopic hand-cranked movie device; an English pub-going Drinking Man automata (with real liquid); and a boggling collection of other automata, working models, peepshows and carnival figures. Wonderful stuff! 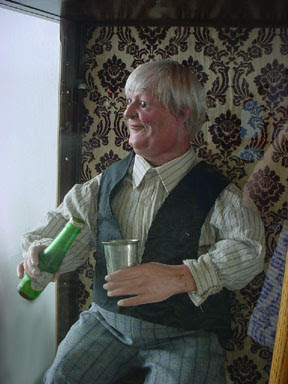 The carnival atmosphere is unique; many of the items are actually originally from carnivals, and have that indefinable air of creepy, tawdry awe. I admit I have not been to their new location at Pier 45, but hope that it preserves some of the oddness and funkiness of the original location. 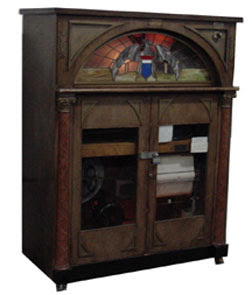 If you're ever in San Francisco, make sure and go have a look!

For more/other steam-powered motorcycles and bicycles, see these:
- A 1936 Motorcycle featured in Popular Science
- A beautiful restoration gallery of the Hubbard Steamcycle, built in the early 1970's
- Various steam bicycles through time.
at 6/04/2007

Great post! I don't know if it's still there, but when I visited the Musee Mechanique about ten (!) years ago, the first thing you saw when you came in the door was "Laughing Sal," a big mechanical clown that laughed uproariously when you put money in. The best part was the sign that said (accurately, I'm sure) "Laughing Sal has delighted and/or terrified children for over fifty years." "Delighted and/or terrified." Hee.

It is indeed still there. Interestingly, the Musee's website is very clear about the fact that she must be called "Laffing Sal". I gather there was more than one Laffing Sal (and apparently a Laffing Sam, as well), in carnivals across the country, scaring the pants off a whole generation of little kids.