Fetishes As Fetish Does Dayak household fetish, collection of the author
Fetish:
1. An object that is believed to have magical or spiritual powers, especially such an object associated with animistic or shamanistic religious practices. 2. An object of unreasonably excessive attention or reverence: made a fetish of punctuality. 3. Something, such as a material object or a nonsexual part of the body, that arouses sexual desire and may become necessary for sexual gratification. 4. An abnormally obsessive preoccupation or attachment; a fixation.
[The root for this word is based in a French/Portuguese word for "artificial"] 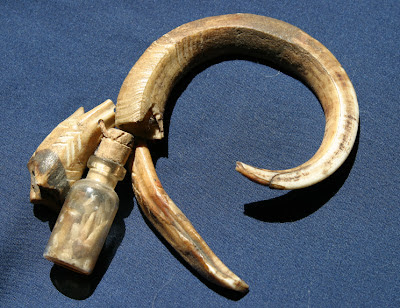 Dayak fetish, purchased by the author in Kuching, Sarawak, Borneo

It's interesting, to me, as someone who is deeply interested in holy objects - whether they be holy in a Christian sense, or in an animistic/shamanistic sense, or in a scientific sense - that the word "fetish" could be so entirely co-opted by the sexual community.* When I google images for "fetish," I cannot tell you how predictable the images are. Finding real fetishes, that is, objects of power, is a matter of happenstance, hard work, good luck, or being in the right place at the right time. Or, perhaps, going to a good museum. 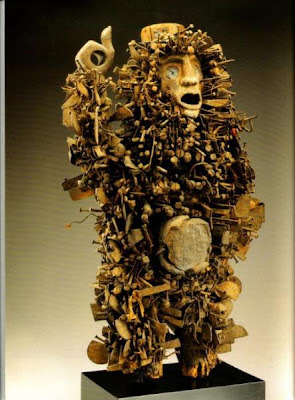 One of the most interesting examples of fetishes are african nail fetishes. Here is a quote from Rand African Art, a site devoted to collecting African art:

"Fetishes were protective figures used by individuals, families, or whole communities to destroy or weaken evil spirits, prevent or cure illnesses, repel bad deeds, solemnize contracts or oath-taking, and decide arguments. A diviner or holy person would activate the statue, using magical substances. Fetishes gained power and were effective because people believed in them.

The nkondi are the most powerful of the nkisi. They were used to identify and hunt down unknown wrongdoers such as thieves, and people who were believed to cause sickness or death by occult means. They were also used to punish people who swore false oaths and villages which broke treaties. To inspire the nkondi to action, it was both invoked and provoked. Invocations, in bloodthirsty language, encouraged it to punish the guilty party. It would also be provoked by having gunpowder exploded in front of it, and having nails hammered into it. They were also used to literally "hammer out agreements"...with clear implications as to what would happen to people who broke the agreements."

Rand also has an excellent couple of comparison pages for nail fetishes, with lots of great pictures and interesting comments. 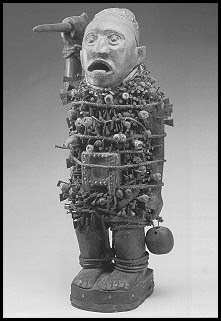 The thing that I find interesting about fetishes is how, like relics, they are given reverence and attributed power. The mana idea I discussed previously is not only an Oceanic concept. Imbuing objects with sacred or magical powers is a global preoccupation. All humans do it, from children who need a special animal to keep the monsters away at night to people who continue wearing their wedding ring after a spouse has died. Think about it: most ghost stories, horror stories, and fantasy tales are rife with objects which are either haunted, powerful, or somehow connected to good or evil.

In many Native American beliefs, plants and animals have a strong spiritual nature. By carving an image of an animal, the spirit of the animal may be encouraged to reside within the carving. By taking good care of a fetish, a person can be sure the spirit that resides in it will be inclined to take care of that person, bringing the person good luck and power. Many archeological finds have shown these carvings decorated by or accompanied by shells, fiber, sinew, etc. Some peoples believed that found objects, such as stones or shells, which were naturally shaped to look like an animal, carried a stronger spiritual presence than a totally man-made carving. 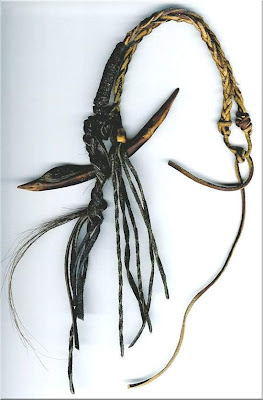 I'm particularly fascinated with this, the way people have begun to fetishize objects that carry age and experience, finding a sort of spiritual, or perhaps merely powerfully asthetic, depth in post-rennaissance artifacts. It's as if we want to capture something that has been lost, perhaps go back and rewrite progress where it went astray; rewrite it so that it doesn't end up where we've ended up.

It strikes me that the place this progress has taken us - this space-age and computerized brand of progress - is into a sterile land of managed comfort, where even food is not sacrosanct: pieces of meat on styrofoam trays in hygenic supermarkets where the produce looks like it was molded in a factory somewhere. One's everyday life is a round of plastic technology, meaningless work and ugly houses, where the oily, fingerprinted magic, that patina of reality, is constantly wiped away. No wonder we look to something marvelous to fetishize: in these circumstances, where everything gets thrown away, the patina of age begins to look startlingly like the patina of love. Anything which has lasted a long time must have been truly loved, truly created with the magic of attention; must therefore be marvelous in itself. No wonder the Steampunk and Clockpunk communities are growing. No wonder creative-minded people are coming together to celebrate the crusty, the outdated, the used. The loved. 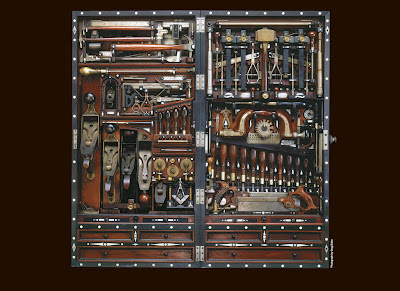 *(NB: By "sexual community" I mean the sex industry and those who follow sexual practices that seem to be reflecting those seen in the industry: ultra high heels, garters, rubber, dominatrixes, etc, etc: all the stuff you can see in videos and so on. My apologies to anyone who thinks I am lumping you together too much, but hopefully the general concept is clear; it's not my intention to spend this post dissecting peoples' sexual practices!)
at 6/04/2007

The word 'fetish' was first applied to sexual paraphilia by the medical community. It was not co-opted by sexual alternatives. Also, those items that are commodified in that community were not originally part of consumerism- the consumerism arose out of that community.

Any object can be imbued with power and meaning. Just as one person looks at a toolbox and sees nothing but expensive items they can buy, and another person looks at a set of tools and sees a way of showing how holy those objects can be in the right hands, the same goes for sexual fetishism. Anything can be made into something crass and cheap- but anything can be made into an object of power in the right hands.

By the way- I did really like your post and the lines you drew between tools and fetish statues. As an anthropologist it's always good to see someone discussing how all humans have a love of beautiful objects and an understanding of how power can lurk in the most simple of objects.

You're right. I did not mean to denigrate sexual practice; for the people who practice them, fetishization is as real and important as religious fetishization can be, or any other kind.

The objection I have, I suppose, is as I said, the co-opting of the word so that the main body of citizens recognize it *only* as a word associated with sex, and as such as a word that came from the world of sex. It has a much older history than that, and can mean so many things, that I wanted to make a distinction.

I should not, perhaps, use the phrase "real fetishes" (in the first paragraph) when speaking of non-sexual fetishes. Sexual fetishization can be as real and powerful as the next thing; by "real" I suppose what I really mean is "traditional", as in "the original sense of the word." When I drop the word "fetish" into a conversation, the conversation stops, and everyone looks at me as if I was crazy. And I have to explain myself. The traditional sense of the word has been largely lost; and I suppose I am being reactionary when I call those kind "real"!

So my apologies, and I'm glad you enjoyed the post despite it. I'm thinking about how to change the phrase so my stance is clearer. Thanks!