Thanks to BoingBoing, who were featuring something interesting, as usual, I have discovered Bibliodyssey, which, in case you didn't happen to read that particular BoingBoing post, is a blog devoted to "Books -- Illustrations -- Science -- History -- Visual Materia Obscura -- Eclectic Bookart" and is full of amazing Wonder-ful images and sources for that kind of Mobius-think which I associate with my favorite time period. 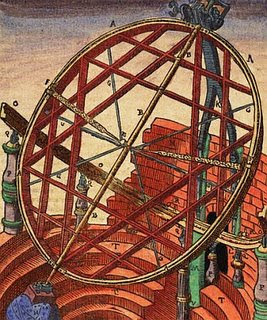 Looking through the site, which has a lovely side-bar with visual links to previous posts, I came across a reference to Tycho Brahe's Astronomiæ Instauratæ Mechanica, a book originally published in 1598 in an effort to secure more funding after a royal death cut off Brahe's sponsorship. The illustrations show what seem to be enormous, house-sized azimuth quadrants and Christmas-tree sized sextants.

Apparently, Brahe came up with the idea for this long-term project: to make a reliable chart of the heavens, using observations from a fixed point over time. He accomplished this, with the aid of royal patronage, by building a huge observatory on the island of Hven (between Denmark and Sweden). Please note that this was long before the first telescopes, which is why he did his measuring with large, accurate versions of those instruments that ships' captains had been using for many years. Bibliodyssey mentions that this was the "first" of his observatories, and is, unfortunately, long-lost.

This reminds me of the Jantar Mantar Observatory [wiki], which I saw when I was in India, at the palace in Jaipur. It was built in 1734 by Sawai Jai Singh, the first Maharaja of Jaipur, who "...succeeded to the throne of Amber in 1700 at the age of thirteen. Abandoning that capital, he founded the city of Jaipur in 1727. A soldier, ruler, and scholar with a lifelong interest in mathematics and astronomy, Jai Singh built observatories in Delhi, Jaipur, Ujjain, Mathura and Benares. Jai Singh was conversant with contemporary European astronomy through his contacts with the Portugese Viceroy in Goa. He supplied corrections to the astronomical tables of de la Hire, and published his own tables in 1723."
- Quote loaned from Michael D. Gunther's Old Stones website, which has very detailed descriptions of the observatory's workings 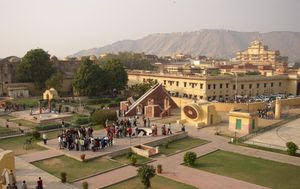 Each of the eighteen observation instruments, which are mostly built out of masonry and are simply enormous, are meticulously constructed, with markings for the positions of the known heavens, and truly ingenious ways for people to get inside or to stand far enough above to be able to measure things as accurately as possible. Standing within one of the sundials, for example, manages to take you out of human scale far enough that you begin to get an inkling of the enormity of the heavens.

I can only imagine what that first observatory of Brahe's must have been like. The instruments look impressive, though without people in there to scale them, it's hard to tell if it's quite as stunning as Jai Singh's contribution. Sigh.
at 5/07/2007