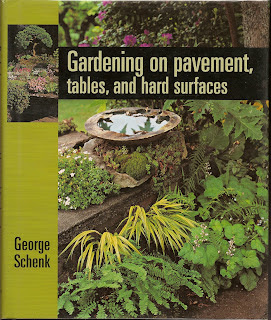 I am taking some extra time to work on fiction this week, so I will just add this addendum to the Genius Loci post, since many people seemed to find that interesting. It is kind of a sidetrack from the usual Cabinet fare, but might prove interesting to many of you. Next week I will be back to some interesting devices which I've been looking into...heh heh.

I wanted to mention this quirky book, written by award-winning author and gardener George Shenk, which appears on first glance to be some crackpot publication, but in actuality it is an interesting and useful treatise on the possibility of planting over hard surfaces. With the addition of soil on top of a such a surface (plus the occasional containment mechanism, such as rocks or sphagnum moss), it is possible to reclaim paved areas - patios, parking areas, wall-tops, steps, and even tables - and green up hardscape so that it feels more contiguous with the natural environment. 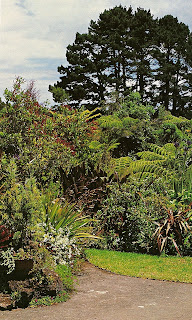 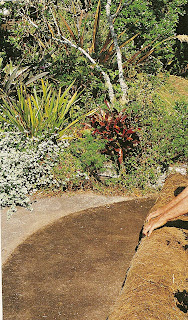 Photos showing how a parking lot can be "grown over" - including the addition of grass, which it is possible to roll up like a rug (bottom).

The book advocates the heaping of soil into and onto the edges and corners of paved areas, as well as along the internal corners of steps and in "islands" in the middle of patios and disused driveways, allowing for planting that fills in the hard edges of old or poorly-designed garden landscapes. 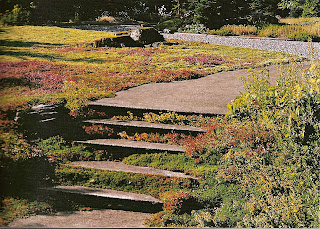 The author has also created many "table gardens", which he describes as being particularly wonderful, appearing to have been levitated in place, and "stump gardens", which capitalize on the natural breakdown process of the wood to make for a lush and many-layered effect. 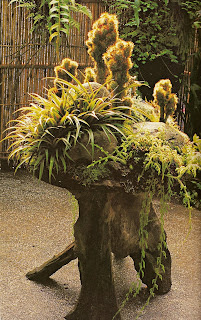 The fascinating thing about this book is the idea that a natural process, i.e. the gradual plant-takeover of pavement which happens whenever it is left alone in the environment too long, has been hastened and encouraged - shaped, even - to create stunning, naturalistic spaces. Mostly, it's wonderful to be given permission to overgrow pavement. So few of us are actually in a position to remove unwanted pavement, either because we can't afford it or we simply don't know if we want to do anything so drastic.

Not only that, but the masters of urban planning have made us feel that the cities' hard look is an intentional thing, something we mustn't mess with because the City government, and subsequent flunkies of all sorts, made it that way. We feel, subconsciously, the Plan behind it, and the general assumption that urban hardscape about tidiness and hygene. This book allows us to question this assumption: is it really about tidiness, about the public good, or is it simply ease of cleanup, like the tiled walls of the insane asylum? Or is it merely bad planning, inspired by laziness, an unwillingness to take care of living things?

As someone who has always been interested in what I call "Guerilla Gardening", I look at this book and I see people piling dirt against the walls of their tenement buildings, planting over their steps, leaving trails where once there were broad lanes of paving; I see wavy lines where there used to be straight ones. Think how the urban environment would look if people were less intimidated by the hard, grid-like spaces around them. We could have revolution: jungle in the city. 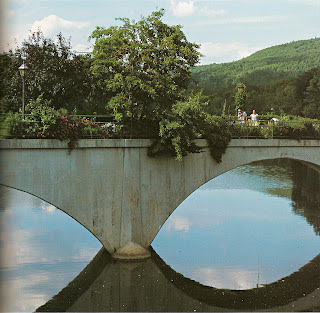 The Bridge of Flowers in Shelburne Falls, Massachussetts. Five hundred kinds of plants, including fully-grown trees, have been planted on this disused car bridge, leaving a lovely walking trail for pedestrians to enjoy. 30 inches depth of soil were laid against either railing, and the hollow support colums were filled 9 feet deep with soil, for the larger trees. 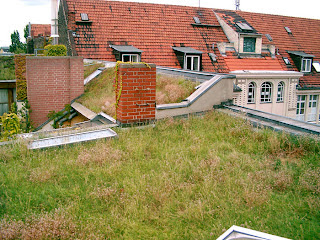 Another, similar idea is the Green Roof movement, which looks back at traditional sod-roofed houses to solve some of the problems of urban water runoff. Plants on the roof help absorb rainwater, keeping the runoff from causing floods and erosion. Not only that, of course, but they're just plain lovely, and much harder to see against the countryside. In the urban landscape these green roofs provide relief for the eye, and a small feeling of joy at the invasion of green. 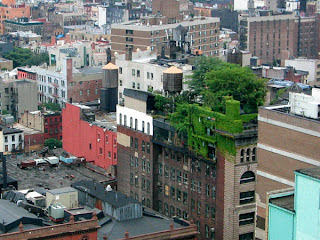 One of the grandfathers of the green-roof movement, a landscape architect who was designing roof gardens using rice-straw and peat moss over fifty years ago, Theodore Osmundson is well-respected. His book, Roof Gardens: History, Design, and Construction is a book intended for architects and designers which tells you all you could possibly want to know about designing for intensive roof gardens.

The Granite Garden, Urban Nature and Human Design, is a fascinating-looking book on the way cities grow and urban access to nature, as well as an examination of bringing the effect of "nature" - without any of the actual functional underpinnings of a true natural environment - into urban and suburban planning.

You've got to check out the Kensington Roof Gardens, which house flamingos in pools, palm trees, and 6000 square meters of garden, and were built in 1936 on a roof in Kensington, London.

The Hanging Gardens of Babylon

A fine capitalist example of the green roof movement being taken seriously in the industrial architecture community.

An interesting, scholarly article about a long-term study on roof gardens in Berlin.

Alyx L has kindly pointed out the vertical gardens of Patrick Blanc, which are truly amazing. Go look at the slide show (and it tells you how to do it, too).

And last but not least, Matthew over at Rebar tells me there is already a Guerilla Gardening movement! To think I was so ahead of my time! You can check it out here.

Heather - you may also be interested in this TED talk by William McDonough, who designed the world's largest green roof (at the Ford plant in Dearborn, Michigan).

Interesting. The Ford plant's roof is very well-known, but I hadn't made the connection between it and Mr. McDonough, whose book, Cradle to Cradle, I actually possess. Thanks!

The book looks fascinating. I have a small roof terrace that could be greatly improved by some of these ideas.

The French garden designer Patrick Blanc has done some spectaculat plantings on vertical surfaces. There are some good pictures here;


Come to think of it, there is something a bit similar to the Bridge of Flowers in Paris. The Promenade Plantee is a disused railway viaduct that has been turned into a long, thin park with a walkway along the middle.