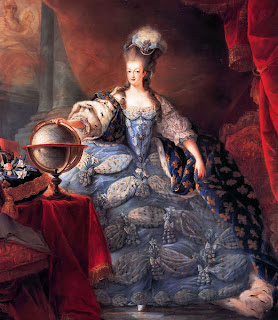 Marie Antoinette, in her youthfully extravagant days. Contrary to rumor, she did not say "Let them eat cake".

When I was young and attending design school to learn about clothing design (yet another of my many guises: the Garment Industry Professional), I had to take a class in the History of Fashion, taught by a woman named DeWitt. This class was one of the most memorable classes I've ever taken, discussing not only fashion throughout history but the political and social influences which caused certain fashions to become popular.

For example, did you know that King Henry VIII was six foot four? His waist grew to more than 45 inches, later in his life, and so he developed these sleeves padded with sawdust so as to broaden his shoulders and distract from his waistline, so he could go on looking massive and kinglike. Thus the Tudor fad for stuffed sleeves.

Or: the lace industry, in pre-Revolutionary France was so in demand that it was a major cottage industry; a dress for one of the two hundred or so courtiers who attended a ball took six months to make, was worn once, and then discarded. Dozens of people worked on the lace, or the embroidery, for those dresses, working under (of course) unpleasant conditions - damp, cramped quarters without enough light - to produce the textiles required, not to mention the actual intricate assembly of the clothes. Apparently, younger and younger people were employed as the older ones went blind and demand went up. The pay was, of course, horrible (not only for the workers, but for the tailors - sometimes the Palace didn't pay their bills) and so everyone was hungry as well. I am quoting this all from the back of my head. There is some question as to how much the textile industry's woes fed the unrest, but I'm certain it didn't help the royals' cause. 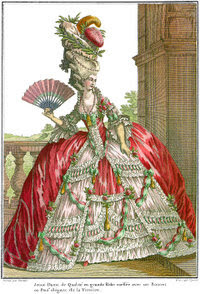 This was not too far off the mark, surprisingly

This was one of the periods I was most interested in, of course: the 1760s and 70s, when huge wigs, embroidered cloth, and layers on layers of lace were the fad for both women and men. I think what fascinates me about this era is the sheer constructedness of it. Both women and men wore wigs, which were pomaded thickly with grease and then powdered. If you were very rich, you had it re-done quite often; if not, well, you simply...lived with it. For a long time, with interesting results. Yech. 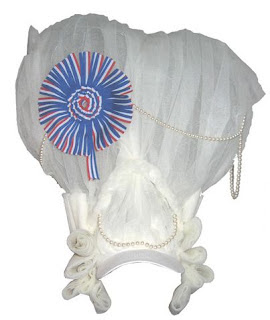 Women's wigs were much taller and more elaborate than men's during this time (though men's wigs did have a spate of relative tallness). Wigs were often up to three feet high, and had elaborate carapaces underneath of wire and wool, over which the hair was drawn. At the height of this fashion, women would have ornate themes woven into their wigs: the famous model ship in full sail, for example, or stuffed-bird-and-flower arrangements. Marie Antoinette was said to have come to a ball with a birdcage, complete with live bird, in her hair. 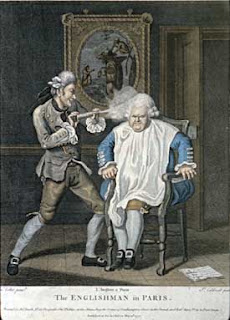 This was cause for much adjustment in domestic arrangements: wig dressers, called "mackerel" due to their floury appearance, were one type of servant employed solely for this purpose. Mackerel stood on special stools to be able to reach the heights of hair, and the women involved had complex garments that they put on to protect them for the final powdering. I saw a picture somewhere of carriages that were designed (or possibly re-designed) to have trap-doors in their tops that folded back from the edge of the door to allow a person with an extremely tall wig to enter.

A new look came out in the 1740s which, in most places, was abandoned by the 1760s: flat, wide dresses with cages built up over the hips. These "panniers," as they were called (yes, I know, the bicyclists have co-opted them), were often wider than the length of the woman's arm. Doors were an issue, to answer your unspoken question, and were negotiated either by squeezing the sides or by simply turning sideways and going through that way. Most places dropped this style pretty quickly, but the French kept on wearing them well into the 1770's. 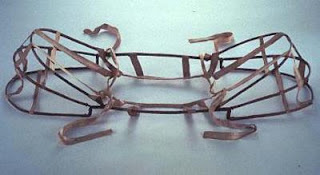 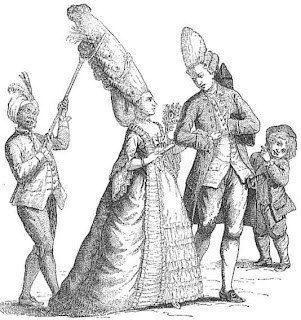 Fashions this extreme will always be made fun of.

In any case, I could make a long comment about how much better constructed fashion is than imposed fashion - i.e. fashion that doesn't allow for discreet corsetry, but insists that you change your actual body...but I won't.

Editor's note: I did have a section in here about the Draughtsman's Contract, a film by Peter Greenaway, which I love, but one of my perceptive readers has pointed out that it actually takes place in the 1690s...This is what happens when you try to blog away from home. Nonetheless, I'm leaving the reference in because I love the movie so much.
at 7/13/2007

Interesting and true. However, "The Draughtsman's Contract" is set somewhat earlier in the period than the rest of what you've covered here: the 1690s. Technically the tall wigs were an Enlightenment fashion; the Baroque period is usually reckoned to have ended circa 1750 with the death of Bach (well, at least in music - it's sort of fuzzy in straight "history" terms, when the late 18th century could arguably be called part of either the Enlightenment or the Industrial Revolution). In fashion all that Baroque and Rococo stuff tends to run together, and they were still wearing clothes in the French court in the 1770s that had gone out of style elsewhere 30 or 40 years earlier (not just the panniers, but also a lot of the court gown styles).

Crap. You're absolutely right about the Draughtsman's Contract; I don't know what I was thinking. I'll correct that.

As for the other stuff, well, Telemann was still making Baroque music into the 1760's, and to be honest, I don't think there were such sharp lines drawn. Things tended to flow into one another and overlap, and France was indeed, as I said, decidedly intent on its own brand of style. Still, if "rococo" could be applied to dressing, this would be it...

Royalty not paying their bills. Now why doesn't that little fact get more prominence in our history booksd?

My late father in law 'served' with Philip Mountbatten (Prince Philip as he is known these days) Vic was a CPO and was i/c the officer's mess on the ship, and the HRH to be never paid his mess bill.

Crumbs ! Missed the bit about Peter Greenaway !
Still this article is interesting and fully matches what I have learned at school about the textile industry in that period.
I have been fortunate enough to see some very nice dress specimen both in Musée Galliera in Paris and in the Rijksmuseum (for an exhibition about Rococo)in Amsterdam and they were awesome, the workmanship on them exquisite. They were also extremely heavy (and so the wigs must have been, not to mention a challenge to balance), a real work of architecture...

Back in high school, I was in a production of Amadeus, and the costumes were all French Revolution-y and--surprising, considering the source--quite well done. I recall that my petticoats weighed maybe 10 lbs, to say nothing of the dress itself, and all of the fabric was this heavy brocade which today has been restricted to use in curtains--for good reason. I am a girl with proper girl-hips and the weight of the petticoats alone left me with bruises that stuck with me for weeks. The skirts were so huge that no one could get anywhere near us, and the fabric so heavy and hot that we were eventually provided with ice cubes we could stick down our bodices for momentary relief--and that was before we even got under the lights. I thank my lucky stars nobody opted to go with corsets and let us rely entirely on the stiff construction of our dresses. Having spent a small spate of weeks in such clothing, I shudder whenever I think of the women who spent their lives thus garbed. My hips ache just looking at the paintings!

Thanks for your valuable contribution!