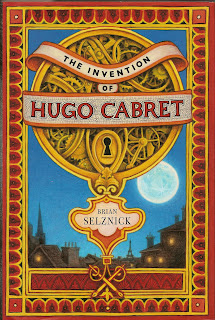 "Every time an inventor tries to simulate life mechanically, he is in fact accentuating his own mortality." This quote comes from the introduction of Edison's Eve: A Magical History of the Quest for Mechanical Life, by Gaby Wood.

I found this marvelous book in the Acknowledgements section of The Invention of Hugo Cabret, which is a primer of sorts for kids about a fascination with clockwork, and the history of cinema. I highly recommend it, both for adults and older children. Not only are the copious illustrations excellent, but the story is created out of the kind of connection-building, drawing-lines-between-several-apparently-unassociated-things thinking that makes a work of fiction really fascinating, mostly because it could so easily be true: the places are right, the facts are right; everything runs alongside each other, so why shouldn't it be true? To take these facts and serendipities and bring them magically to life in a way that is better than any truth is the best kind of storytelling. 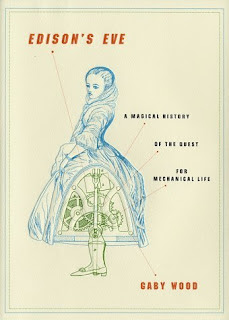 Although I haven't yet read Edison's Eve, the Introduction available via the "see inside" link on Amazon, unlike most of these Amazonian links, allows a very detailed and interesting look into what must certainly be a very interesting tome. Beginning with a description of "The Writer" and "The Drawer" - the two automata whose videos I showed three posts ago - she moves on to a meditation on the magic and fear involved with the creation of something which might, ultimately, replace us: human automata, or androids. She begins with Sigmund Freuds’ description of “ ‘the Uncanny,’ the feeling that arises when there is an ‘intellectual uncertainty’ about the borderline between the lifeless and the living. It is triggered in particular, Freud wrote, by ‘waxwork figures, ingeniously constructed dolls and automata.’ A child’s desire for a doll to come to life may become, in adulthood, a fear.”

From here, Ms. Wood skips along through the Spanish Inquisition, Mary Shelley's Frankenstein, automata in ancient texts (!), and alchemy, to the moment when she begins her story...

“...at a later, critical moment: when the ambitions of the necromancers were revived in the well-respected name of science. In the eighteenth century, an interest in anatomy, advances in the design of scientific instruments, and a fondness for magic tricks meant that automata were thought of as glorious feats of engineering, or philosophical toys. As Umberto Eco has put it, the inventors of that period ‘substituted mechanics for the forces of evil.’ And yet...the rational scientists who constructed these celebrated objects ofen harboured ambitions beyond the bounds of reason...The madness left over from darker times was all the more disturbing for being hidden beneath the mask of enlightenment.”

She goes on to a fascinating discussion on the philosophy of creating un-humans, from the association they have with death (being un-alive) to the philosophical implications of the lingo used in modern-day robotics and, curiously, in the places where these modern-day automata tend to fail.

One of the ideas Ms. Wood brings up is the idea that machine intelligences having no perception of the passage of time - this being one of the basic tenets of human consciousness. They can count the minutes and hours, sure, but they do not "understand" what is happening: why or how or even the fact that it is true that things change through time. Robots and automata also, and this is key, don't age as we do, and thus mortality is a concept which does not apply to them - which makes them all the more frightening. They are about creating life where there is no life, and it feels strange, feels, as Freud points out, strange and wrong.

This question, of humanity and its replication (or failure thereof), is a constant in our modern (ie, industrial) culture. Think of all the literature, films, and so on that explore the idea of adding and subtracting humanity - sometimes even exploiting our fear of its lack:

...to name only a very few obvious ones.

Much has been made of the link between alien/martian invasion stories/movies and the Cold War fear culture, which in some sense is another side of the same coin, as they were all political stories about making an Enemy (collective noun), less than human. The Stepford Wives, which doesn't really fit into this Cold War category, is nevertheless basically a political allegory with a feminist slant, and therefore less about the humanity of the individual people than it is about the creepy price of perfection.

Ms. Wood speaks of how mechanical know-how turned, at the end of the eighteenth century, from an exploration of making machines more human, to the exploration of making humans more machine-like. It seems to me that with the machine age, fear of the un-alive human began, bit by bit, to take precedence over fear of witches, magic, and other fears of the unknown.

Which is not to say the thrust to make humans and machines interchangeably blurred has not been seen as good - as a progression from obscurity to greatness. Back in the 1920's, as part of the Efficiency Movement, Lillian and Frank Gilbreth strove to find ways to help make workers' movements more efficient by examining special films of people working (using, for the first time, little lights attached to their hands which tracked their movements). Their goal was to reduce the number of motions involved in a task. At the time this was seen as a way to make their jobs easier and better, but in latter years there has been a lot of discussion about how this thinking has led to a cultural environment where workers are expected to behave efficiently at all times, like machines...or automatons. 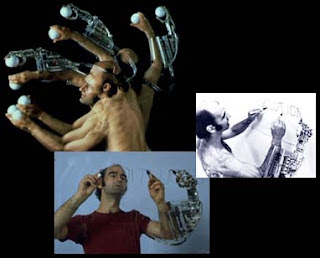 Efficiency can be taken to extremes, though. A performance artist called Stelarc, claims that the body is obsolete. His work is all about the idea of becoming post-human. Third Arm, for example, takes the idea of a prosthetic limb and goes a step further: what if the technology was actually used to give us extra limbs? Another work, Stimbod, looks at voluntary and involuntary control of our bodies. Using a touch screen, viewers can program a series of motions and gestures which, when executed, then electrically stimulate the artist's muscles to perform those same motions...So then the man becomes the automaton.

(Smackings of William Gibson, and the amplified bodies of The Sprawl Triology here)!

Stelarc's obsession with the body, and improving on the body's basic design, is paradoxical and ultimately controversial: if one is a creationist, then the body is sacrosanct - it is as God(s) created it, and not to be improved upon. Evolution, on the other hand, says that things are always being optimized for the current circumstances - and yet, isn't the 4-limbed model one that has been proven to be evolutionarily efficient? And what happens when prosthetics become more of us than the original? The Tin Woodsman, for example, didn't start out that way. He was a flesh-and-blood man, a woodsman who gradually lost all his limbs (and eventually head and torso as well) to his own axe, and thus to the replacements made of tin; and after all of it, the thing he longed most to regain was his heart.

Much of this, of course, comes down to humans' inability to stop tinkering with things. The world as it is today is a product of this inability, as are many of our bodies' illnesses. The desire to cheat Death brings with it a chance that we will, in effect, invite Death in to be part of our lives - not only as a by-product of the very processes we have invented to cheat death, but in a form of deathlessness, a type of being that extends existence without taking into account an ultimately human trait: the sense that our lives are passing, that every minute is a gift, that we have only so many days to seize.
at 7/23/2007

God, you're amazing. Every post is simply brilliant, Heather. Can't wait till you write a book! Now that'll be something else.

I read Edison's Eve for a sculptural kinetics class a few years ago. I highly recommend it; it's a very nice read.

However, I have to take issue with the ever-popular idea (one sees it everywhere) that automata/machine intelligences would not age as we do.

Machines, by their natures, require regular maintenance and replacement parts, and these needs increase as times passes, not unlike the needs of our own bodies. In addition, these needs often increase exponentially with the complexity of the machine - modern microprocessors might be able to survive a few decades before ceasing to function, at best.
An "immortal" machine intelligence would have to constantly be copying itself into new parts - a process which would raise profound questions about the nature of the ghost inside, and certainly have an effect on its functioning. Even then, while very long-lived, the information would slowly degrade.