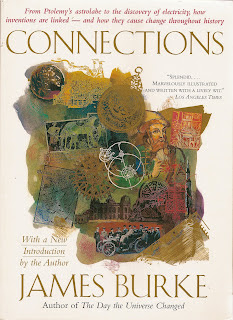 At the risk of giving away all my secrets, I want to recommend James Burke's book, Connections. It's based on this brilliant TV show he did for the BBC in the 1970's, about the history of invention. Some of you may be familiar with it.

The great thing about this series of videos, and even more so about the book, is that he doesn't take a historian's view of the sequence of events. Instead, he follows a roundabout, storyteller's route, drawing lines between this person over here having this idea and that person over there taking one aspect of that invention and running with it - in a completely different direction. There is a long and wonderful discussion of navigation and lodestones, another section discusses Guericke's work with vacuums and how this led to research into the composition of air, and eventually the investigation of light passing through gases, and thus on to the cathode ray and television.

The book draws connections between vacuums and weather, atomic energy and the Norman Conquest, ploughs and gunpowder. It discusses, among other things, water clocks, Gutenberg's printing press, Vaucanson's automated duck, and the Jacquard loom (which I plan to discuss sometime soon, so don't read the book - okay?). Clockwork, the evolution of the telescope, and the timber crisis fromt the sixteenth-century glass industry: it's all in there. In fact there are things here (and images too) that you never heard of, that will just blow you away. 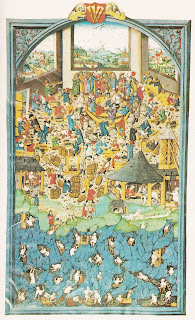 Life in a silver-mining town, late 1500s - including those who are underground

I cannot recommend this book (and the video series) highly enough. The main advantage of the book is that you can leave it somewhere in your house that you frequently go to sit or lay quietly (near the toilet or the bed, for example) and it will keep you awake at night as you peruse the amazing ideas and connections laid out in it, like a particularly well-designed maze.
at 7/18/2007

Oh, I used to LOVE Connections when I was growing up. I had nearly forgotten about it.

Thank you for the reminder.

I grew up on Connections, and greet any rerunning of an episode on PBS with unabridled glee. At one point, there was a computer game based on the concept of the show 'hosted' by Mr. Burke himself. It was a wonderful waste of a weekend's worth of time. Thanks for the reminder and the book recommendation!

I think I have to get this for my father now...he's an engineer and is always tinkering with something mechanical...and of course, he's so hard to buy gifts for! Thanks for the reccomendation - Joy

James Burke and his Connections convinced me to get an advanced degree in history of technology. I'm, of course, not doing history or technology for a living now, but what a wonderful thing Burke turned me on to.

I am so glad I found your blog, Heather! Very very interesting!
Marijke