A friend of mine just came back from Washington, DC and tells me there is a really interesting exhibit at the Smithsonian's Arthur M. Sackler Gallery, titled "Encompassing the Globe: Portugal and the World in the 16th and 17th Centuries," on until September 16th. The show is about Portugal and exploration, and the effect it had on the culture of the times.

To look at Henricus Martellus's 1490 map of the world is to behold a strange, unsettling planet. Europe seems vaguely familiar, but beyond the Mediterranean everything dissolves wildly into myth. Africa is a squarish blob, connected to Asia by a long strip of land. A huge island called Taprobana dominates the Indian Ocean, and there's no hint of the Americas or the Pacific Ocean; the map simply stops at China. Half the world is a confused jumble, and the other half is not yet even imagined.

But jump ahead a half-century to Pero Fernandes's map of 1545 -- and the planet is utterly transformed. A huge wave of exploration has brought the world into focus for the first time: Africa has taken on its distinctive shape, India is no longer an insignificant bump, the Pacific is there in all its vastness, and the Americas have appeared. Guesswork has given way to knowledge: A new world, with all its complexities and possibilities, has suddenly come into being.

.."It's hard for us to imagine how transformatory this period was," says Julian Raby, the director of the Smithsonian's Sackler and Freer galleries. "It's the first moment of globalization -- information about the variety of the world, in terms of its peoples and cultures, was just pouring in. And part of what we want to get across is that sense of wonder at the complexities and textures of the world."

Here's a secret, though: If you go down to the lowest basement level of the gallery, near the back somewhere, there is a room full of pieces from a Wunderkammer. My friend says it's not set up or organized like one, but there are some really marvelous pieces: a rhinoceros horn wrapped in gold, a bezoar the size of your fist (also decorated with gold), and a number of other really interesting, wonder-ful things.

And of course the show has maps. Lots of cool maps. 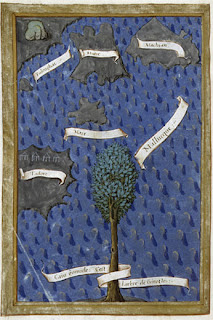 "When Ferdinand Magellan set out on the expedition that would circumnavigate the globe (1519-1521), he was looking for a route to the Spice Islands, or the Moluccas, now part of Indonesia. Magellan was killed en route, but his navigator Antonio Pigafetta survived. This map, which includes a clove tree, is a from a 1525 French copy of Pigafetta’s journal."

Fabulous! I'm headed to DC next week - thanks for the tip!