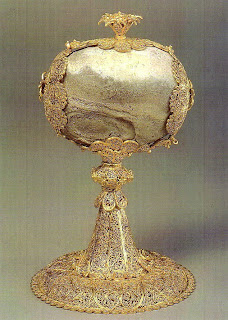 My first conscious awareness of lodestones magical stones was in a horrific scene in Susan Cooper's The Grey King, from the Dark is Rising series (If you have not read this, you should; or at least buy it for someone young in your life, and watch them get all interested). In this scene, the main characters can't find their dog. They search and search, if I remember rightly, and finally find him in an abandoned building, flattened against the floor in a terrible, unnatural position. They realize, after a moment of horror, that there's a lodestone warestone pinning the dog to the floor. No one can move it; it's stuck fast to the ground.

I don't, unfortunately, remember what they did about the situation, but the image has stuck vividly in my mind, a reminder of a deeper reality.

The books have a wonderful memory for the kind of tale-telling that was done in historic Britain, especially the kind of tricks that evil spirits might visit upon their enemies, and a kind of lowering, glowering landscape behind and between the usual holidaying sunshine of a proper British adventure book. Really great stuff, and metaphorically very apt, as the darkness behind the light is so true of those isles: the modern (as in post-Victorian) English image, for example, being one of bramble jelly and short pants, seaside holidays and cricket and tea on the lawn of half-timbered houses in suburban villages. Or second World War images like those in The Chamomile Lawn, by Mary Wesley (another great author). Behind this lays the old Britain: woad-painted warriors and unhappy Romans, Saxons and witchcraft and sprites both evil and beneficent; the evil eye, the hollow hills; Stonehenge. ...All of which, unfortunately, have been exploited within an inch of their lives in recent years, resulting in a zeitgeist of mass-market Lord-of-the-Rings-driven mythological consumption. The darkness is lost in the endless discussion pigeonholing each relevant part into fantasy role-playing and alternative realities.

If you really look at some of the old stories, you see a lack of unified cosmology; what you have instead is a clear, if uncohesive, sense of other beings living side-by-side with the rest of us. These beliefs, these myths and stories were not an alternative reality, a game to play: they were entirely real, entirely contextual to regular life; they often involved malevolent beings and influences living in one's house, in one's village. Think of Calvinist witch-hunts: look, if you can, at the transcripts from those trials, the kinds of things those poor wretches were accused of. People were more isolated then, more frightened of the power of the natural world all around them. To quote Thomas Hobbes, their lives were "solitary, poore, nasty, brutish, and short." And their magic was dark, hairy, and very local. 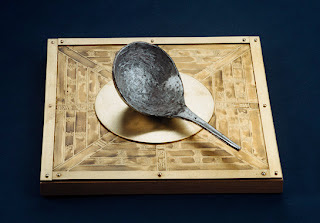 Chinese lodestone "spoon" compass, circa 2nd c. CE; the Chinese understood lodestones to be trying to return to their mother stone. They also believed lodestones to be an important factor in geomancy, otherwise known as feng shui

In any case, I've spent many years thinking of lodestones as this magical thing, this alchemically deep side of an everyday object, something from that dark crack in the sunshine of reality. Even if they are not the magical stone that I remember from the Grey King, they have a long history in alchemy and other places of being deeply, magically meaningful in the order of the universe. However, looking through all the references on the Web, I find no mention of lodestones in this context. The relevant information has been reduced to just that: information, a scientific description, a history of nautical navigation. Magnetism and geology. Gone is the magic that lodestones once held in the minds of the public.

Lodestones are "a magnetic mineral form of iron(II), iron(III) oxide Fe3O4, one of several iron oxides. A piece of intensely magnetic magnetite... was used as an early form of magnetic compass [since] iron, steel and ordinary magnetite are attracted to a magnetic field, including the Earth's magnetic field. Only magnetite with a particular crystalline structure, lodestone, can act as a natural magnet and attract and magnetize iron." wiki 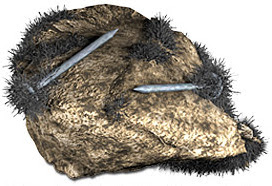 If you peer under the surface of all the factual writing, sift it all and look back into the depths of history, starting in 1st century China, what you will see is a magical phenomenon: the discovery of a rock which moves on its own. Not only moves, but has this attraction to things. And even more magical: sometimes the rock doesn't do this - only certain ones actually work. The rock seems to want to point to a star. Perhaps it is in league with the star; perhaps it is the influence of spirits. As the Chinese discovered, the rock had a life of its own, no matter where you are in the world.

Curiously, at the opposite end of the universe from geology are bezoar stones, or bezars, which are stones of mineral and hair found in the digestive tracts of ruminants such as goats, sheep, llamas and deer. Originally, bezoars were found in goats living in the mountains of Western Persia. They came to Europe from the Middle East around in the 11th century, and their believed usefulness against poison made them magical: European people went on using them until the 18th century, their supposed powers becoming more and more complex until they lost credibility entirely. 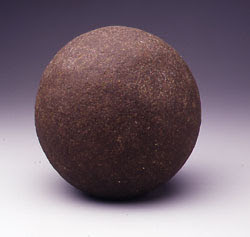 A hairy bezoar, one without much calcification

"Many persons of status accepted potential poisoning as a chronic threat and armed themselves for battle against it. Medicine of the time was often practiced by improperly trained and unlicensed "surgeons" who could often do more harm than good. Those who were wise would take preventive action to avoid having to depend on unreliable "cures." Because wine and other drinks were often laced with arsenic, the most popular poison of the period, many magical devices were employed to negate its deleterious effects before it was consumed. Amethyst, crushed emerald and "unicorn horn" (often narwhal tusk) were all immersed in suspect beverages in the belief that they would render them safe. The most common and effective of these amulets was the bezoar stone...

"Discoveries on the wreck of Nuestra Señora de Atocha show that, in colonial Spanish-America of 1622, bezoar stones were certainly popular, and relied upon. Bezoars were rare, and the extravagant contexts from which they were found on the wreck show the power and esteem that was ascribed to them. The most spectacular item to reflect this belief is the gold "poison" cup, which once held a permanently mounted bezoar in its interior to absorb the poison from any drink it may have held. Another, chicken-egg sized bezoar is beautifully mounted in an engraved and enameled gold framework that was apparently designed to be suspended from a chain. This stone could then be immersed in any drinking vessel to remove toxins. A group of ten unadorned bezoars was found in a silver canister, apparently being shipped to Spain for more formal treatment. Because the Atocha primarily traded in South America, it is assumed these bezoars were extracted from llamas or alpacas, although there are accounts of the Spanish taking them from deer in the New World."

Bezoars were commonly thought to be an old-wives' tale until recently:

"Modern examinations of the properties of bezoars by Gustaf Arrhenius and Andrew A. Benson of the Scripps Institution of Oceanography have shown that they could, when immersed in an arsenic-laced solution, remove the poison. The toxic compounds in arsenic are arsenate and arsenite. Each is acted upon differently, but effectively, by bezoar stones. Arsenate is removed by being exchanged for phosphate in the mineral brushite, a crystalline structure found in the stones. Arsenite is found to bond to sulfur compounds in the protein of degraded hair, which is a key component in bezoars.

By the eighteenth century the marriage of magic and medicine was coming unraveled. Too many ailments, such as epilepsy, jaundice and plague were said to be treatable by bezoars, and people began to grow wary of such claims. The popularity of the bezoar soon faded."

"The scarcity of bezoar stones by the 17th century led a group of Portuguese Jesuits working in Goa to come up with a man made version. These so called 'Goa Stones' were a mixture of bezoar as well as other precious objects believed to have curative powers. Until the beginning of the 18th century, when medical authorities began to debunk the belief in these stones, they could sell for more then their weight in gold and were often contained in cases such as the example offered here." 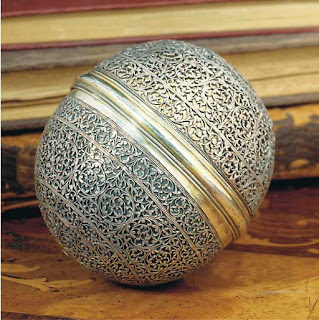 The question I have, after all this, is: does something have to have no pragmatic use for it to be remembered as magical? It's clear that bezoar stones are now thoroughly explained (like a pearl, bezoar stones - as opposed to another kind of bezoar, like a hairy bezoar - are usually caused by the initial introduction of some irritant into the digestive tract). Yet their magic lives on. They continue to weird us out. We see them and they feel alien, something not-normal. You can see them in museums, on display in their original, sanctified splendor.

Lodestones, however, have been co-opted by their usefulness. As soon as magnetism was fully explained, and people began being able to make imitation lodestones (magnets), the basic mystery about their actual status as weird stones seems to have lost its power. Why? They are still found in the ground, the only stone on the earth which is naturally and permanently magnetic. To me that's like a little crumb of the universe, a bit of the True Earth showing up. Like holograms, a piece which shows the whole, though it be the tiniest fragment. When did they lose their mythological status? Think about the incredible fact that you can rub a bit of metal against these stones, and the metal will come away with the same properties as the rock. If that's not magical, what is?

Here is more than you could ever want to know what has been written throughout history on bezoar, or bezar, stones.

For a revolting example of a hairy bezoar you can try Neil Gaiman's Sandman book #3, "Calliope"

And, if you want a kind of repellent example of how magic has been turned into corporate commerce, check out this website, where a big-money diving company sells treasure at exhorbitant prices. Now you too can sit in the comfort of your own home and purchase real treasure, including gold-encrusted bezoars, online.
at 7/03/2007

You are a font of information, m'lady.

But didn't Susan Cooper refer to the thing that was pinning the dog to the floor of the hut as a "warestone"? Not a loadstone ... unless something peculiar happened between the British and U.S. editions of the book.

No, you're right. I did say, "If I remember rightly." Duly noted, and thanks so much for the right word. I always like having the right word!

i love those susan cooper books so much, and now i'm hooked on your blog, too! (but if you haven't seen that trailer for the horrid movie adaptation of the dark is rising, avoid it at all costs. it's a disgrace!)