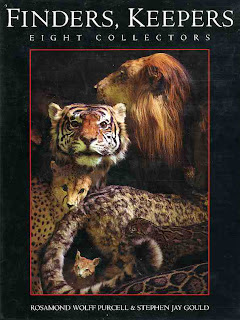 One of my biggest obsessions for the last fifteen years, and perhaps something I collect, is people who collect obscura. My first introduction to this amazing world of collection came from a friend who had a book in which elegant pictures of preserved babies and human arms were dressed in lace (see below), and collections of teeth, labeled with silver inlay, were laid out individually in beautiful compartmented boxes. At the time I didn't know what I was seeing, but the images haunted me; and when, several years later, I went to graduate school to study sculpture (I was a maker of - you guessed it - Cornell-like boxes) I found out. I became obsessed with vitrines, display cabinets, and arrangements of macabre beauty.

...But that's another story. 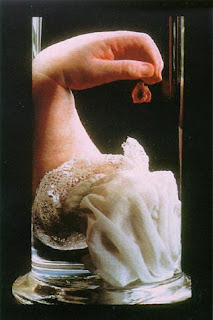 In any case, I never did find that book again, but I believe I may have found something nearly as good, if not better. The photographs in Finders, Keepers: Eight Collectors , are exquisite, and from what I have seen, the text is fascinating. And lo! They even explore the fantastic collection of Peter the Great, the owner of most of those extraordinary works which so affected me all those years ago.

Here is an excerpt from The Sciences, which was the agent of my discovery: "Rosamond Wolff Purcell’s detailed color photographs of real items from real collections are no less bizarre than the inventions of Julian Barnes.
In Leiden and Saint Petersburg she beholds the lifework of Frederik Ruysch, a seventeenth-century Dutch anatomist who collected limbs, organs and the bodies of fetuses and newborn babies. Ruysch transformed tissue preservation into an eccentric kind of art, injecting a fluid that highlighted the circulatory system as graphically as the red lines in a medical illustration. Three centuries later his anatomical specimens retain a ruddy glow that almost conceals their lifelessness. An infant’s head, hemmed by a collar of fine lace, squints out from a glass cylinder; a disembodied arm arches upward in a jar, an eye socket suspended on a thread held in its fingertips.
Peter the Great, who visited Holland in 1697, was said to be so touched by one such preparation by Ruysch that he knelt and kissed the child’s face. He later purchased the entire collection and took it home to Russia, adding it to an enormous “cabinet of curiosities” that already contained a two-headed sheep, a four-legged rooster, a stuffed and mounted elephant, the seven-foot giant who had served as Peter’s footman, and a collection of human teeth extracted from various subjects by Peter himself, not necessarily for medicinal purposes. Were these scientific specimens, objects of art or merely the excesses of one of the idle rich? In Peter’s time such collections were high fashion, and such distinctions were unclear."

Having discovered Peter the Great was my man, I got into a lengthy and complex voyage of discovery, and came across many fascinating and gruesome descriptions of life in the Russian Court during his time. He was a remarkable man, driven to modernize his country, and yet a ruler who used his absolute power to the utmost, despite his "modern" asperations, and was apparently somewhat vain: the "Great" after his name was actually added at his own instruction. His political life is common knowledge, but to me it was his personal obsessions, and the stories of his travels in Europe (such as the one above), that are particularly riveting.

For example, did you know that the man was an amateur dentist? Apparently he was really keen on his own skills, and often pulled people's teeth simply because he was interested in the techniques and wanted to try it out, though often it was because he "detected" a problem - not too surprising in that day and age. He was known to pull the teeth of courtiers and even passers-by. One can only imagine how difficult it would be to turn down one's tsar if he was desirous of pulling your tooth, for whatever reason!

Many stories say he had a bag of teeth he would carry with him to display his skill, though rumor has it he didn't know his own strength and would often pull out gum tissue as well as teeth. One tale even speaks of a member of his court telling him that his wife had a bad tooth which she wouldn't admit to. The man asked Peter to pull it out, and this was done, with much screaming and struggling on her part; then afterwards it became clear that she actually had no dental problems whatsoever - her husband was simply being vengeful for some marital issue. Peter, however, was undisturbed, and apparently quite pleased with the outcome.

This explains, of course, the intricate and lovely box which I remember so well...

His Kunstkammer, now housed in the Peter the Great Museum of Anthropology and Ethnology, was famous for many things, but particularly its collection of human and animal deformities. He was interested in them because he felt they could give some clue to human and animal generation (which was of course correct), and issued many proclamations to the effect that any "monsters" that were found, living or dead, must be delivered there - on pain of death. In a quite forward-thinking way, he wanted to assure that the people under his rule came to see that these monsters were not inspired, as had been thought before, by the devil, or by evil curses or the evil eye, but by other causes. His "other causes" were, by modern scientific standards, still too superstitious, but to my mind, they suit the magical thinking of the time. If you're interested, you can read more in this interesting article on the culture of the St. Petersburg Kunstkamera in the Eighteenth Century.

There are a number of museums which have developed from the same roots, though none with this particular combination of ghoulish fascination, scientific enthusiasm, and remarkable asthetic. For a few of the more notable ones, you can try these: 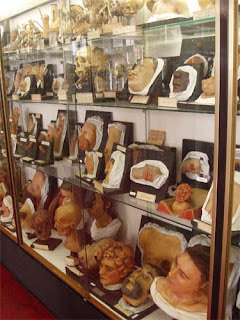 Musée Dupuytren, or the Dupuytren Museum, for which I cannot find an official website but which is full of extraordinary wax models of all kinds of anatomy: Les Cordeliers, 15 rue de l'Ecole de Médecine, F-75006 Paris is the best I can do. If you want to find out more about Baron Dupuytren, you can find a bio here.

Another place to look is the Mutter Museum, at the College of Physicians of Philadelphia, which is famous for its collection of unique specimens, such as the 5 foot long human colon and the woman who was turned into soap.

As a resident of the city, I can say that visitors divide neatly into those eager to visit the Mutter Museum, and those eager not to.

Also fun, in an obscure way, is the Wagner Institute, sort of a museum of a museum, where, to quote,

"The Wagner Institute’s nineteenth century exhibit hall – a soaring three-story space – houses an extraordinary collection of natural history specimens including mounted birds and mammals, fossils, rocks and minerals, insects, shells, dinosaur bones, and the first American saber-toothed tiger, discovered on a museum-sponsored expedition to Florida in 1886. Gathered largely by founder William Wagner and Institute curators and faculty during the nineteenth century, the collections are displayed in cherry-wood and glass cabinets dating from the 1880s and maintain their original “systematic” scheme, providing a rare view of a Victorian science museum."

Another notable and related museum is the 'International Museum of Surgical Sciences' in Chicago... worth a visit if you make it to that city.