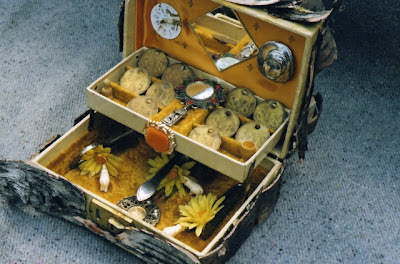 I found Nader Hasan's art by complete accident, during one of my crazy search-threads on Google. Mr. Hasan, originally from Jordan and now living in Montreal, makes art out of found bits and pieces from anywhere he happens to find them.
“I am obsessed with small work,” he told the McGill Daily, a newspaper for McGill University. It is true: Mr. Hasan's work has the same kind of obsessive arrangement as some of the best Kunstkammern, or the Sedlec Ossuary (see below). Things that most people would walk right past are actually treasures which, when put in one of Mr. Hasan's arrangements, make you suddenly aware of their beauty. 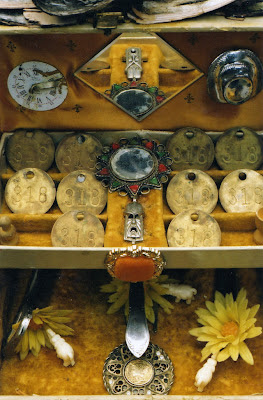 What I love about this work is its attention to detail, the fearlessness of the presentation, and the eye Mr. Hasan has for how things will look together. Small things can so often be, simply, junk; yet even plastic daisies and old (but not antique) radio knobs are reborn in this new context; somehow the age of the materials (old enough to look old without being precious antiques) give these arrangements a mystique; we feel we are holding history in our hands, collected - though whose history is not clear. 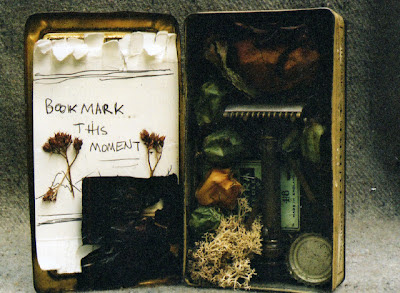 I have, since childhood, been obsessed with things that carry mana, which in the Oceanic sense is "an impersonal force or quality that resides in people, animals, and inanimate objects and that instills in the appreciative observer a sense of respect or wonder." [wiki] In other words, for some objects a kind of life-magic clings to them or is infused into them. In some descriptions, mana can rub off of powerful people onto their objects, like pollen rubbing off on to a bee's legs - and if you are the possessor of an object with mana, your own mana increases as a result. In Hawaii, for example, contact with an object owned by the King was often powerful enough to kill a normal person. In my own childhood cosmology, which was built on hearsay, all objects had mana, and the amount varied depending on the object's history and usage. I was left with the feeling that if something had enough magic in it, it could become independent, moving around when I wasn't looking...

But that's another story.

In any case this is why I like Nader Hasan's work: he takes the small, tiny mana of everyday objects, and assembles them, gluing them together with his own artist's mana until they glow with their own kind of power. These small conglomerations of life-magic hold more than the sum of their parts, in every sense of the idea: they exert a sort of power over the senses, making us bend closer to see, making us want to keep one in our house in a shrine, making us wonder about the histories we are looking at - and, finally, making us wish, as always, that we could do that too.
at 4/06/2007

Thank you for the art and for the paragraph about mana. It's another way to talk about some things I've experienced/felt.
This is a wonderful mind looping website.