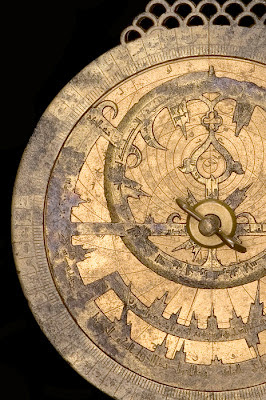 Detail of the earliest known Persian astrolabe, from the MHS in Oxford (see below)

I'm posting this early because I'll be traveling next week and don't know if I'll be able to access the Internet. Suffice to say, I'm thinking of indulging a lifelong fascination with astrolabes, buying one and (gasp) learning how to use it. I've always found them to be deeply mysterious and quite beautiful.

Astrolabes were first used in the Islamic world, starting around 700 AD. The Europeans didn't pick them up until about 1000 AD, and went on using them until the mid-17th century (they were used in Islamic areas until the mid-19th century, being available, traditional and quite accurate for voyages in smaller seas). They are generally made of brass or copper, sometimes with gilding. Curiously, manufacturers of brass astrolabes in 17th-century India were two centuries more advanced than their European peers (see this study). 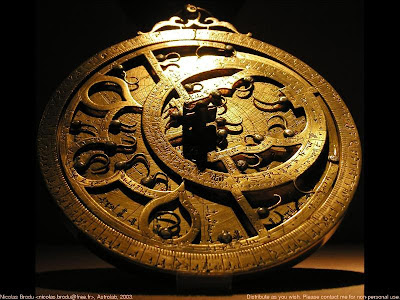 Thanks to Brill publishers for the lovely photo

There is something marvelous about the idea that you can take a large medallion, hang it, sight the altitude of various heavenly bodies, and then know where on earth you are. It anchors one in the universe, and in such a beautiful, accurate, mathematical, and low-tech way.

While looking at all the wonderful pictures of astrolabes I found (and by the way, the Museum of the History of Science at Oxford University, which looks like an amazing resource for Cabinet materials, has a whole bundle of astrolabes for your perusal) I came across Max Chen, whose oilycog site is full of flash things he's made out of bicycle parts and other bits. Among other steampunk-related items (including a very bike-messenger version of an orrery) I found this astrolabe, which I think is really wonderful. 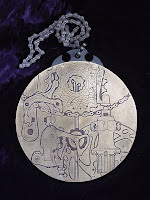 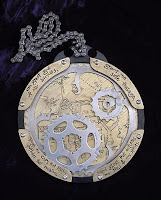 The front side has a map of San Francisco, but only the bicycle lanes are shown (no Bay Bridge crossing). The rete rotates freely, and on the perimeter is a little prayer, which reads: "Oh great god of all bicycles,/Grant me safe passage,/Through the cars that kill, potholes that maim,/And glass that deflates my tires and my spirits."

Even though it doesn't exactly orient one toward the stars, it is a sort of microcosmic astrolabe, orienting the user to his or her small world of the City as seen from the Heavens. It carries the same sort of mystique that many of the ancient astrolabes probably had for their owners. 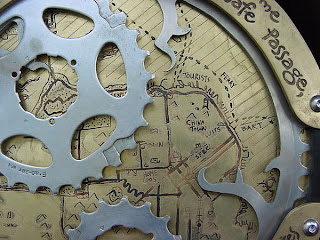 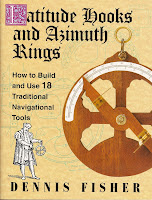 If you're feeling in a DIY mood, I highly recommend the book Latitude Hooks and Azimuth Rings: How to Build and Use 18 Traditional Navigational Tools, by Dennis Fisher. This book has excellent explanations and diagrams, and from it you can learn to make astrolabes, quadrants, seagoing sundials, latitude hooks (which are Pacific Islanders' way of finding latitude), and nocturnals (star clocks), among other things. It really is a treasure trove of wonderful instruments that people have used for hundreds of years - and sometimes millenia.

Lastly, here are some other purveyors of more traditional newly-minted astrolabes, in case you are interested in owning one:

- Jim Fanjoy makes a nice copper medieval-style astrolabe, based on the descriptions by Chaucer and others.
- The Brass Compass makes four models of brass astrolabe, including a desk model, for a reasonable price.
- Brian Greig, in Australia, makes hand-made replica astrolabes.
at 4/04/2007

Heather
Thank you so much for sharing your whimsical, quirky and somewhat phantasmagorically view of the world around you. When so many use their blogs to bore us with the banal, or bombard us with the brutality of it all, you have chosen a pixie path of serendipity and joy.
You are delightful!
Best wishes, Bob