One of my greatest loves in life is when people take what is at hand and make art out of it, particularly a collecting kind of art, like the Wunderkammern. One of the most lovely examples of this is in certain ossuaries, where the gruesome symbols of mortality - human bones - have been elevated to a state of grace through artful arrangement.

Two of the best examples of these are the ossuary at Sedlec, in the Czech Republic, and the Capuchin Crypt, under Santa Maria della Concezione dei Cappuccini, a church in Rome.

The Capuchin Crypt holds the bones of over 4,000 Capuchin monks, and holds six rooms' worth of intricately stacked and hung bones: 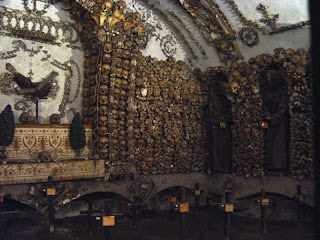 But my favorite is the ossuary at Sedlec, which has an interesting story you can read here [wiki], and which is all the work of one man, a master woodworker, who was told to "put the bones in order". Sedlec holds the remains of many thousands of people over more than seven centuries' worth of burial. It is mind-boggling, and very beautiful: 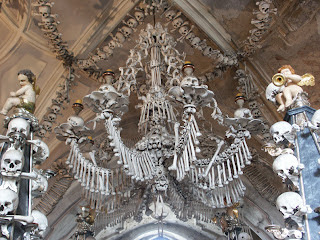 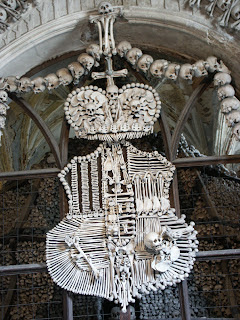 (Thanks to Jairo Frisco Arenas Ramirez for the Sedlec pics)

Notice the bones stacked behind the coat of arms. It's quite incredible. I can only imagine that, after working with his new materials for awhile, the master woodworker ceased to see the bones as macabre and began to see their sculptural potential instead.

Not all ossuaries are rooms full of beautifully-crafted bone sculptures. Sometimes they are simply a chest full of bones, or a place where bones are deposited. I suppose the Catacombs in Paris could be classified as an ossuary, technically. Wikipedia describes an ossuary as "a chest, building, well, or site made to serve as the final resting place of human skeletal remains."

One of the most awe-inspiring -through sheer numbers - is the ossuary at Douaumont, in France, where the bones of those killed at the horrific 1916 Battle of Verdun are kept. The bones of more than 130,000 unidentified French and German soldiers are on display in small, windowed alcoves all around the outside of a, well, very large memorial building. Douaumont is not nearly as artistic, but it is a grim and remarkable testament to the horrors of war, especially one where the technology has outstripped the strategy of its leaders: 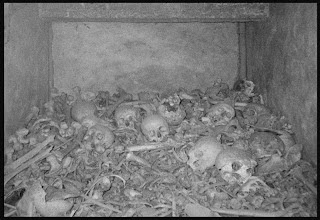 Beside this, Sedlec and the Capuchin Crypt, both of whom took centuries to collect their contents, look positively peaceful and merry.
at 4/02/2007