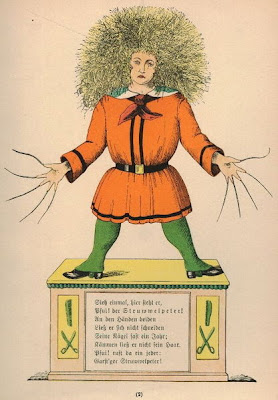 Final addendum: EEEK! The Tiger Lillies are playing in San Francisco the day after tomorrow (November 3rd) at the Swedish American Hall. Yow! Looking at the reviews, though, it looks like it could be incredibly offensive. Be warned.
at 11/01/2008

You've likely seen this site before but in case you haven't... http://intothehermitage.blogspot.com/

woah! i was very suprised to see etrewel peter when i opened your blog today! my grandmother used to read it to me from the book she has at home! her version is in dutch though and she used to translate it for me! scary folk tales!

I wanted to leave you a comment anout a long ago post...about the cemetery and burial and all, 2007, August...I finallly decided to comment here to let you know how I'm happy and pleased to discover your blog today. I like very much your manner of writing things, the way you explore the subjecs.
About this famous post I talk in beginning, one of my daughters is an houses'inspector for insulation governement program(don't know how to say in English...) and recently she found small bones and many infant's clothes after "opening" a wall in someone's house to see the insulation...Just imagine the sight and the eyes of my daughter !
I'll be back to your posts often now, I became a fan !
Esther

Yay! First post! (insert maniacal laughter)
Hehe, "In an attempt to press the correct buttons to save the Tamagotchi's life, the woman lost her own." Irony at its best! What do you think of NaNoWriMo?

Wow, that's so interesting about the bones and clothes in the wall! It gives me ideas for posts...

Gawd, I can't wait to start talking about less important things! Although I'm gloomily predicting a tediously important post election talk-in. It ain't over until the Inaugural Ball. - VPX Jean

Struwwelpeter!!! I saw the Shockheaded Peter show in SF back in 2000, and still have the book. Very much fun! Not for kids, at all, I think, as there's something of an undertow of saucing-it-up for the adult crowd to keep them interested in a childhood classic. Moral tales are not all that compelling for jaded urbanites, it seems. But the show is a real kick! The "special effects" are ingenious and hilarious. You'll enjoy it!

I saw that show, too - which is why I'm excited to see this one, which is apparently somewhat different, being based on the seven deadly sins. Check it out, if you liked the other one! Though like I said, I've heard some things...

Hi, I stumbled upon your Cabinet about a week ago, one of the most beautiful sites I've ever come across. It really harkens back to when people actually had liesure time and used it well. Honestly, It makes me feel like I'm in an old study, running my fingers across the soft leathery books on a shelf, "Oh, look at this ..." Please, keep it up!

Thanks for posting about Shockheaded Peter! I first got to see it in London (2001?) and again a year later in Chicago - seeing the video is doing wonders for my pre-election anxiety. Glorious!

Oh, I see, Heather. I thought you meant they were doing Shockheaded Peter again on the 3rd.

I just found your blog and I get happily lost in it everytime I check in. Thank you so much! I just finished reading an older commentary on Scrooge McDuck and Bill Gates and it made me wonder if you've ever read The Magic Christian. The protagonist/millionaire Mr. Guy Grand knew how to spend money. If you ever come across this book it is well worth reading and I have yet to see anyone read it without laughing till tears started from their eyes. Please don't bother with the movie as it is a pale pale imitation of the book. Thanks again for a wonderous website. Liz

speaking of distraction and struwwelpeter ...

The book, written by an child doctor, is truely the first book on all symptoms and varieties of what today is called ADD (which sadly seems to be a quick-fix diagnosis for all kids that are off-the-norm these days)
And yes, the rate of ADD-diagnosed people getting hurt or killed in all sorts of accidents is dramatically higher. Ask me , I am an ADD-guy and I had my share of look-in-the-air near death experiences ...

Its pure coincindence I'm still alive (with some steel spare parts in my body that is...)

I am in my fifties, and was brought up in the UK. We had few books when we were young, but Strewelpeter was one my parents thought was a children's classic, and was in our bookshelf. I remember it from when I was about five. It gave me nightmares. It still scares me. It should never have been a children's book. The horrors it promises to small and impressionable children ...

I can agree with that. I wouldn't show it to my children unless they were over six, and even then it's mostly a read-to book, with commentary. When people are laughing at it, it does help de-fang it a bit.

I think that's one of the reasons the Tiger Lillies' opera is so perfect, it captures some of that scariness and weirdly distorted view of the world of children.