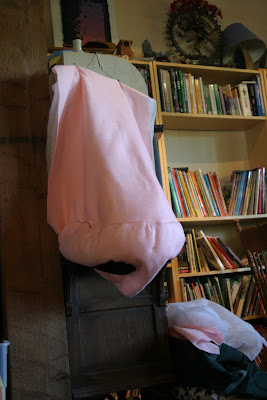 Younger daughter wants to be a giant nose for Halloween. That's right, a nose. I've been feverishly trying to sculpt one out of felt and padding for her (see above), but I worry that she is too short, and people, not seeing the nostrils, will think it is... well, some other fleshy part.

The idea came up when I decided to read her The Nose, a short story by Russian author Nikolai Gogol. Now, although it is couched in terms which might be normally difficult for a 6-year-old, the basic premise - that a man (an Inspector of Reindeer, no less) might wake one morning missing his nose, and subsequently see it walking and driving about the streets dressed as a "General and Glorious Governor of Games" - is exactly the kind of thing which appeals to a 6-year-old.

There is no description of how a nose, perhaps two inches long, might later be able to get about as a well-dressed dignitary (one can only imagine it changes size at will); but these completely surreal shifts never bother children. Which is one of the things I like about the way their little brains work.

Curiously, once I began telling people about her costume I found that no one in my community, as far as I know, has ever read Gogol. What a mistake! I am not a big fan of Russian authors, myself, but his short stories are great. Do try this at home, kids.

And, in case you want to innoculate your children at an early age, I find there is now a copy of The Nose specially translated and illustrated just for kids. Pass it on!
at 10/29/2008

In an odd coincidence, I am reading Gogol's *Dead Souls* right now. I've been asked by multiple people whether it's the only thing I could locate MORE depressing than election coverage, but in fact I'm finding it hilarious and "The Nose" sounds like more of the same. I'll check it out! And kudos to your daughter for wanting to be something more interesting than a fairy princess for Halloween.

Gogol is indeed wonderful and magical.
Good luck with the costume (now that is a REAL challenge).
Will you be doing NaNoWriMo again this year?

I'm taking a Russian Lit class right now, actually: "Dandies and Dead Souls," lit from 1800-1850. We haven't read Dead Souls *yet*, but we have covered The Nose, and I loved it. Your daughter is genius - I think that costume is awesome. And if people think it's phallic, then that's their problem, and they need to get their minds out of the gutter.

I keep wanting to make her a General's outfit to wear over the nose, but she just wants it plain. She does, however, want to wear snot-green tights underneath it, just to add her own touch to the effect.

As for NaNoWriMo, I might be doing a variation on it: NaPaWriMo, as I have an academic paper which I've hardly started, and it's due on December 1st. I could post my word count and put up excerpts on the NaNoWriMo site... would that be too strange? It has to be in serious ArtSpeak. Hard stuff.

Maybe I'll count each word as triple, since it's in such tricky language.

Wonderfully abstract costume. Love it. Reminds me of the year I went as a giant exclamation point.

Love the costume! And thanks for the book recommendation. We like nose stories around here, including the very silly "Mr Blewitt's Nose" and the cleverly illustrated "The Adventures of a Nose."

Oddly enough the Gogol nose book is paired with a book called "Some Smug Slug," which is what my 10-yr-old is going trick-or-treating as.

Now I wish my dad had read Gogol's the Nose to me at six years old. I don't think I'd've been cool enough to want to be a nose for Halloween though.Keep up the good work - it's obviously going the right way.