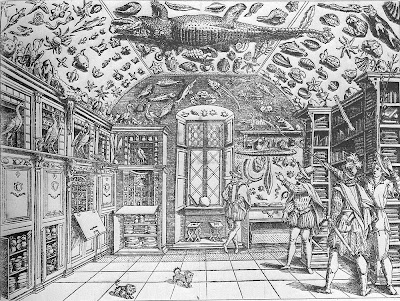 Additionally, the blogging format invites blog collections to intermingle transparently: people can “add” to their catalog of items through blogrolls, blog memes, and, especially, polite appropriation: as blogs work with one another, greater Wunderkammern are created. A slow collapse in the authority of centralized taxonomies and top-down culture-making has left an opening for the re-emergence of personal taxonomies in a different era of exploration and the connection of ideas. Steampunk and Clockpunk are lively examples of subcultures that ignore the mass-market paradigm; participants are often as satisfied with virtual images of “real” things as they are with actually owning them, which appears to be less important than the idea of its perceived authenticness - unlike the original Wunderkammern, for which ownership was paramount, and authenticity secondary. The viewer is no longer simply an onlooker to another person’s riches, but a participant, invited not just to move through intimate collection-spaces in the same way people were invited to wander through the Wunderkammern of old, but to take from it and build their own.
at 11/15/2008

I enjoyed your abstract. The words 'serious ArtSpeak' filled me with grad school dread! Not to worry though, your writing is concise and intelligent (if only ArtSpeak were so).

The premise of blog as Wunderkammen is fascinating. An initial concern I had was about the impermanence of a digital cabinet. However as I was writing it out it became evident that both actual and virtual Wunderkammen are at the mercy of time; either through physical decay of its artifacts or obsolete technology. Regarding the latter, will the fleeting nature of the media render digital cabinets less worthy of conservancy?

Nice thought! One of the arguments I want to make is about how unimportant it is in the blogging world that the collection be one of "real" things. In the world of art, this is discussed in terms of arguments about how far away from the original a replica is (versus the idea that nothing is original - or at least, that the idea of "original" is meaningless). Somehow in the world of blogging, this discussion is less important than the etiquette of crediting your sources, regardless of how far away from the "original" the item may be.

What's interesting about this is how accepted it is that the artifacts of blogging are not "genuine" items; the replicas are considered to be all that is needed for the experience of the object or idea. Thus the Wunderkammern of the web become much more elusive in terms of authentication. And yet, that's not the point of it all. And it doesn't detract from the importance of what's being shown and discussed, I think.

I recently wrote a post that touched on this same subject. Primarily, I am interested in the blog/Wunderkammern comparison as a way of thinking about museums that are increasingly integrating "Web 2.0" into their practices today. I think the differences between these two media may be more numerous than their similarities (one coming out of a tradition of private ownership and rarified space, the other emphatically shared and networked), but this offers some compelling tensions for museums entering the world of blogs and grass-roots communication.

Sounds very cool. The thing that comes to my mind when I read this is Walter Benjamin's article "Art in an Age of Mechanical Reproduction," in which he discussed the "aura" of authenticity that original artworks had that could be lost in copying them. The very physicality of Wunderkammern objects is lost on the web, at the same time it becomes that much more democratic.

I used to have a blog that I called "cabinet of busted wonders". The idea being I treated it like an old fashioned cabinet of wonders, while acknowledging that it is broken somewhat by being a collection of not real things. Now it acts as a page that holds links to some online comics I made. http://bustedwonder.com/cabinet

It was fun while I was doing it, and I think in general Blogs as Wunderkammern is a useful idea.

Interesting ... I had no idea such material could be presented at the CAA annual meeting. As someone who has maintained an architecture weblog for almost three years, I remain a little skeptical about how useful the format can be in terms of disciplinary contributions. What I like about your abstract is how you strive to locate the weblog in terms of cultural production. I am a PhD student in architecture, and everytime I wander across departments, I am amazed at how steadfastly dismissive people are of blogging. I'm not sure if they bemoan the "lack" of peer-reviewing, or if they are unaware of the potentials of blogging. Although I am not sure what it's potential may be, I've blogged for almost three years ... so something must be going right.

Now, if I can get more people to actually read my stuff ... now that would be nice.

Slightly peripherally, Ian Hacking's book on probability should be part of the background for any history of calculation.

I would echo the Walter Benjamin reference, because one of the issues about the web is the idea that you can have multiple identical copies of something - how can filesharing be stealing if you are leaving an identical item there?

I remember the warning that I was given at the beginning of a history of art course, that we are not seeing the pictures, but a light projetion. Scale, weight, colour etc are all transmuted into a single form. In the same way, blogs are the multifarous thoughts of individuals pulped into electrons and displayed in a surprisingly similar form. We can only wonder in two-dimensions. It is possibly a demonstration of our increasingly visual society that the tactility and scale of a unique object is discarded

I'd love to see something on jargon and Wunderkammern -- the gathering of unusual, exotic, and mysterious terms as both a means for evoking a sense of wonder, and as a display of power. Best of luck at CAA -- I wish I could be there to hear the talk.

Well, the feel of the things...blogs are frequently about private obsessions that the blogger/collector feels need to observed and acknowledged as precious by some sort of public. It's not like taking up a collection for a new wing at the hospital (a generally acknowledged good).

An early article written about blogs in 2000 by Julian Dibbell compared blogs to Wunderkammers.

Oh dear! And he says it so well, too. It seems one is destined to endlessly reinvent the wheel.

However, thanks for this - it's nice to see another person's words about it. I'm so tired of my own right now... and it might come in handy some day to know about it.

This illustration is very beautiful. Thanks for sharing with us.

You've got to check out Susan H. Delagrange's new Kairos article about Wunderkammern as visual arrangement. She also explores how it should inform our digital compositions. Link below.

Also, have you published this work yet? I'd love to cite it in a paper I'm working on for Computers and Composition. Thanks!