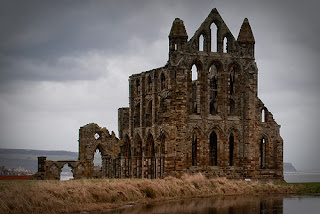 Whitby.  We've heard of the place, on the coast of Yorkshire, home of the madhouse in Dracula, the place with the lightning, the cemetery; the scene of that great Gothic battle against evil.  One imagines it a dreary place, lashed with wind and weather, with dark clouds clinging to the rocky shores.

But Whitby is actually somewhat of a tourist place, and always has been; a place for the people of northern Yorkshire to go to the seaside, an old fishing port (where Captain Cook learned his trade), connected to the North York Moors, where from Georgian times until the present, people go to walk and look.  And Whitby jet, mined there since Roman times, was very popular among the Victorians.

George Merryweather was a doctor living in Whitby, an honorary curator of the Whitby Philosophical Society in the mid-19th century.  His habit of inventing things, so common among the people of the day, led to his invention of the Platina Lamp, a long-burning light source:

"In a communication from George Merryweather, Esq. to Professor Jameson, dated Edinburgh March 5th, 1831, it is proposed to extend the aphlogistic platina lamp, by constructing the body of the lamp, of tin large enough to contain a quart or more of alcohol.  This will be sufficient to keep the platina in a state of constant ignition for thirteen or fourteen days and nights.  Such a lamp, while entirely devoid of glare, affords sufficient light to shew the face of a watch in the dark of night.  ... if it be connected with an unfailing reservoir of alcohol, the lamp may be ignited for years.  The spongy platina does not appear to be, in the least, deteriorated by being kept in a state of constant ignition."

-- The American Journal of Science and Arts, Volume 20, under "Miscellanies" 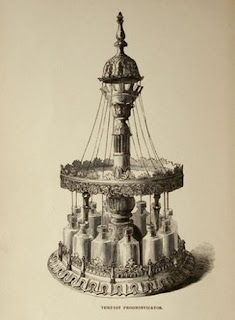 However, the thing which Mr. Merryweather became truly famous for was his "Atmospheric, Electromagnetic Telegraph, conducted by Animal Instinct," or, more shortly, his Tempest Prognosticator," which he built for the Great Exhibition of 1851.  It is a beautiful structure, with a bell at the top designed to look like the dome at St. Pauls.  Around the bottom are placed a dozen glass bottles; threading from tiny hammers around the edge of the bell are threads, which connect to a piece of whalebone just inside the neck of each bottle.  Inside each bottle is poured an inch of rainwater and then -- oh happy home! -- each bottle is occupied by a leech.  A common, ordinary surgical leech.

Being a doctor, Merryweather had observed that medical leeches responded to barometric pressure or electrical charge in the air, or whatever it is that allows smaller animals to know when bad weather is afoot.  The leeches' response was to climb -- probably a good response for water-dwelling creatures just before a rain, so that they don't get washed away.  So when Merryweather's leeches climbed to the top of the bottle, they nudged the piece of whalebone, which caused the string to move and ring the bell.  It's not clear, but it appears that the more the bell rang before a storm, the worse the weather to come. 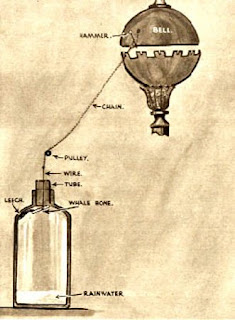 Interestingly, Merryweather knew that his observations would come under question.  He set up a system, using the incredibly efficient postal system of the day, wherein he would post a letter to Henry Belcher, President of the Whitby Literary and Philosophical Society whenever his Prognosticator gave him warning of an impending storm.  Because the postal system delivered mail several times a day, the letters were postmarked with both date and time, proving that he had predicted the storm before it happened.  He did this for all of 1850, and his Prognosticator was surprisingly effective. 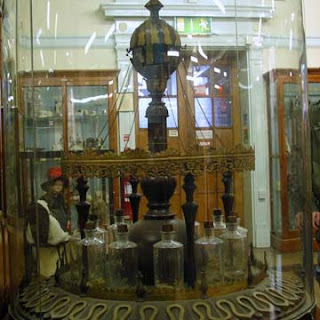 The thing that is interesting to me about this invention, which few people actually talk about, is the way in which Mr. Merryweather was working to span that growing gap between the natural world and the newly-ascendant scientific world, using "instinct" as an accurate gauge for something as practical as weather-prediction.  Interestingly, however, meteorology was a very appropriate battleground for this clash, as the scientific method did not always work so well with the chaotic ways that weather systems worked:

"…Faced with problems in constructing meteorological knowledge from the weight of precision observation, meteorologists turned their attention towards kinds of knowledge that stood outside conventional methods and instruments, however extensively situated, however precise and continuous.  The reputation of popular weather wisdom explained how meteorology persistently remained a key site for attacks on the dogmatism of scientific culture, and it forced meteorologists to consider the problem of evidence that seemed to escape the forms of number, weight, and measure."
-- Predicting the Weather: Victorians and the Science of Meteorology, by Katharine Anderson

In other words, meterologists couldn't simply get by predicting whether people would die at sea based on simple measurements; they had to rely, in some part, on other things they found to be true:

"Eccentric as it may appear, the Tempest Prognosticator embodied widely shared assumptions about forms of knowledge, instruments, and meteorological science.  Its plausibility was based on two key perceptions: first, the precision and infallibility of sensations; and second, the importance of instruments to modern knowledge.  Both are crucial for understanding the relationship of weather wisdom and scientific meteorology.  The complex instinctive behavior of some "lower" forms of life modeled a natural form of automatic precision."
-- Katharine Anderson, above

I had never really thought before how much the battleground between accepted wisdom/magic and science was fought to a much later date in meteorology, but it makes sense: for, if there's one thing Chaos Theory and satellite technology have taught us, it's that weather is a fickle, far-ranging thing, and telling sailors whether to go risk their lives merely on a barometer is something no one is completely comfortable doing.  Anyone attempting to predict the weather, even today, is likely to come under criticism and even scorn when their predictions appear to be caged in ambivalence; so Merryweather must have thought he was onto something wonderful.  He even tried to convince meterologists that his leeches could be hooked up to a telegraph system, with a minimum of difference in design; but not surprisingly, they did not take the bait.  They already had their feet set on a road in which animal instinct was discounted, and would continue to be discounted, until the late 20th century.

(The Tempest Prognosticator is now kept at the Whitby Museum)