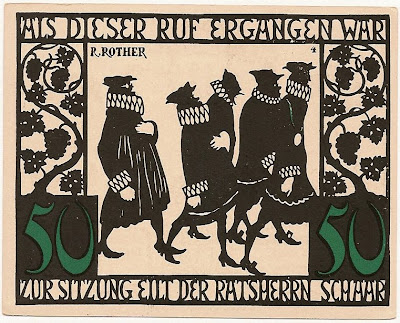 My brain's been full lately of the novel I'm working on, based in the Neddeth's Bed universe ('ware: Neddeth's Bed is an intermittent, first-draft worldbuilding exercise, not to be confused with finished product!), and it (the manuscript) has been eating my life, in a much slower way than I would wish. Describing things always takes so much longer than reading said descriptions! It feels like the characters are moving at a snail's pace. So I apologize for being absent so much, but I really, really want to get this thing done! So close...

That said, I had a birthday (harrumph), and was given some very cool stuff. So, at the risk of eroding a reputation for actually having thoughts, I will present you with the following very interesting filler.

It seems that during World War I, in Austria and Germany, there was a moment when the metal that coins were made of became more valuable than the money it represented. People began hoarding coins, and during the war, the metal which was available was needed for the war.

The shortage of metal meant people were having trouble, well, making change. So individual cities, local banks and citizen's organizations and so on began to take it on themselves to print what were called "Notgeld," which means "emergency money" or "necessity money", mostly colorful paper notes in low denominations (although they also used linen, tin foil, porcelain, and coal, to name a few unusual materials).

Notgeld began during the war and carried on into the period before and slightly overlapping the height of hyperinflation, when it took the proverbial wheelbarrow of money to buy an egg (more on that next post), which happened in the early 1920s. So I suspect a lot of these notgeld were printed. And, since they were really, really beautifully-designed (this was the height of German Expressionism, after all), people began to collect them. And, since people collected the pretty ones, there began to be some competition about who could produce the prettiest.

Which goes to show that even in the worst of all possible worlds, there are microcosms of beauty.

So the long and short of it is, my friend Gwyan got me some paper notgeld (and one porcelain coin which doesn't scan well) for my birthday. And they are really, really beautiful. So I will share a selection of them with you... 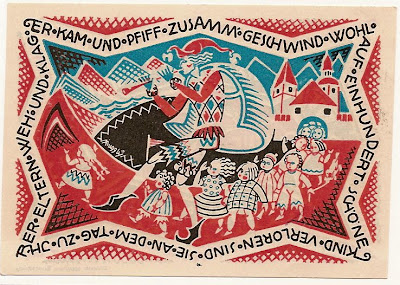 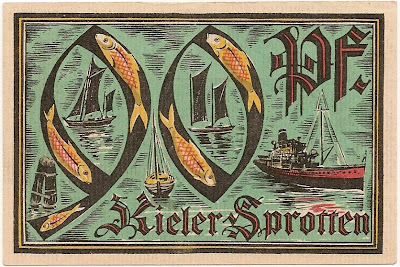 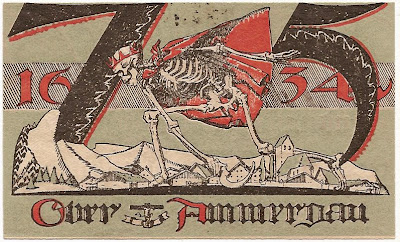 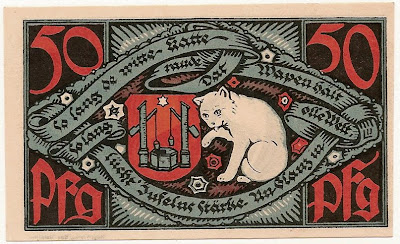 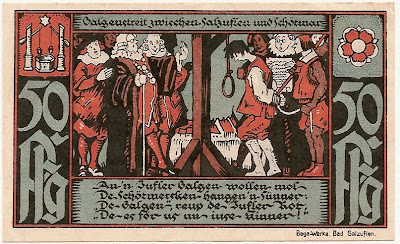 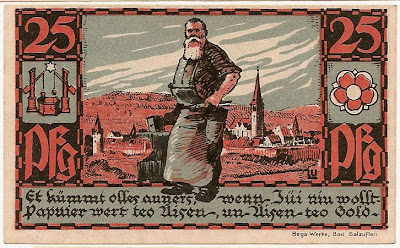 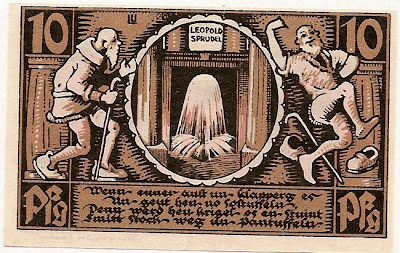 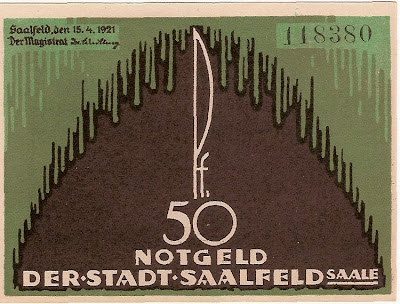 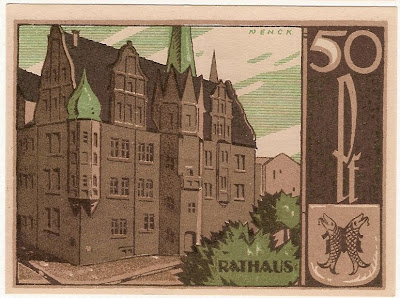 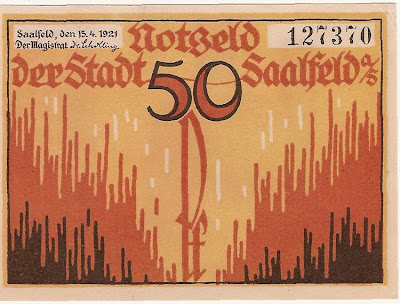 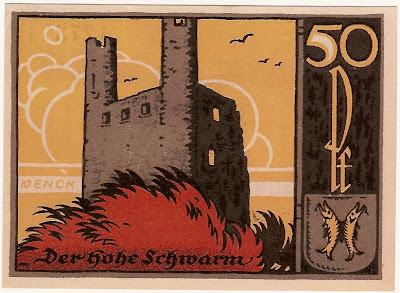 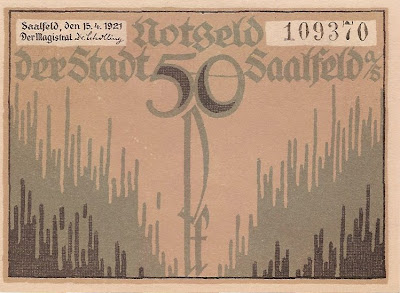 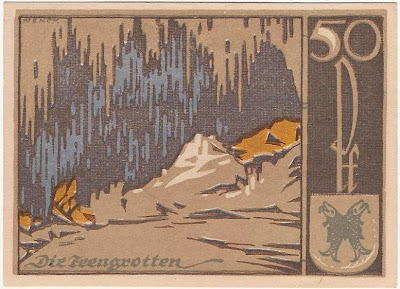 wow! Things I never heard of, and then they are lovely to boot - thankyouverymuch. The fishes on the 90 piece are great. I wonder about skeletons and hangings, it makes me wish I could read German, or knew more about the culture to guess why they picked those illustrations.

The notes (it's funny, with my poor German "Notgeld" sounds like "not money) are beautiful and interesting -- and, in a couple of cases, scary (Death, hangings). Those wacky Germans.

My guess is that a lot of these things show pictures of traditional stories of the areas where they were printed. Thus the Pied Piper (it is money from Hamlin, after all), and, I suspect, the hanging as well.

Plus the German Expressionist movement was known for its dramatic sense of darkness and angst (ever seen Nosferatu?), so that would follow too.

these are totally amazing! i might need to start a collection of my own. the skeleton one from oberammergau is the best.

Regarding the skeleton on the Oberammergau notgeld, I believe it refers to the legend of the town being spared during a plague. (http://en.wikipedia.org/wiki/Oberammergau_Passion_Play)

These are absolutely stunning! Thank you so much for sharing.