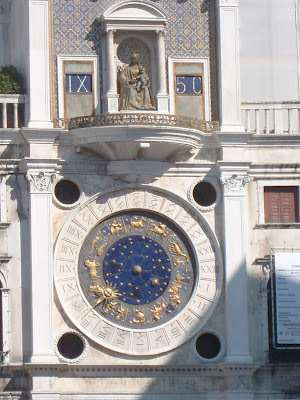 Ed. note: I have been meaning to post about this. Pardon my clockwork geeking below; if you are uninterested in technical details it is still worth checking out the photos!

While in Venice, I found out accidentally about the little-known tour of the beautiful clock tower on the Piazza San Marco. Everyone is so busy going into the Basilica or up the Campanile they don't look much at the clock tower; but it's a beautiful thing, marking not only the hours but the date, moon phase and astrological time.

The clock is remarkable: aside from the mechanism, there is a ball painted half gold and half blue, which by its orientation in the clock face will describe the face of the moon. A track circling the outside allows a group of four figures (the three Magi and a trumpeting angel) to pass in front of the figure of the Virgin (this only happens on two festivals a year now, see below). As they do so, the Angel raises its trumpet and its wings, and the Magi bow and move one arm in salute. 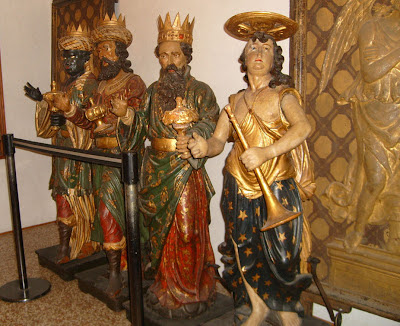 At the top of the tower, two larger-than-life shepherds (known as the Moors because of their patina) swing their hammers hourly at the great bell. They are beautifully put together (and vastly anatomically correct), their fleeces hiding the fact that they are segmented at the waist. 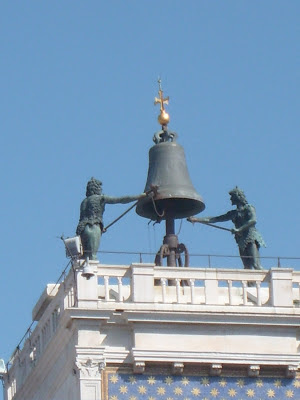 The clock was created by clockmaker Gian Carlo Rainieri in 1499. Rainieri then moved into the tower and was paid to keep the clock running and accurate. When he died a number of people of varying skill levels succeeded him, and after two hundred and fifty years the clock was in bad shape. So in 1752 Bartolomeo Ferracina, a reknown clockmaker, was hired to refurbish the clock.

"He actually made a completely new movement. The old mechanism and the original astronomical dial were given to him in part payment. The new movement, although modified, remains until the present day. It has four trains, in a peculiar cruciform pattern, one for the time, two for the hour strike by the Moors and one for the special 132-blow strike mechanism which will be described later. On the upper floor of the tower, above the main movement, there is a separate mechanism for the Magi's carousel." (from Antica Orologeria Famberlan, and excellent page with everything you might want to know about the mechanism's history).

Curiously, the pendulum was lengthened twice, and became long enough that it necessarily hung down into the next floor. This meant that the temperatori, living in the tower below the clock mechanism, had the pendulum moving across his living room at all times. Here is a picture from the 1950s: 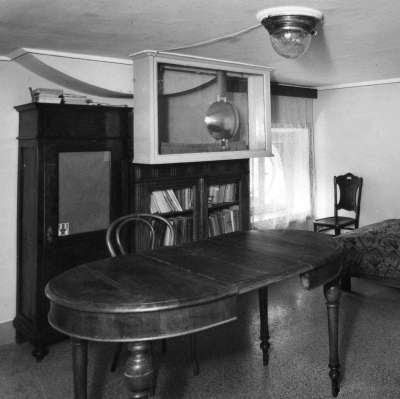 The climb through the tower is "not recommended for pregnant women or people suffering from claustrophobia" as the stairs are narrow and get narrower as you go up. Personally, I was impressed with their very Enlightenment look: 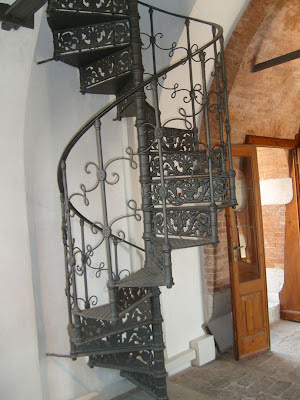 In 1857 more repairs were required, and Giovanni Doria, the temperatore of the time, made a careful survey of the necessary repairs to both building and mechanism. While they were at it, the Venetians decided they wanted a luminous display on it so that the time could be read at night. So Luigi De Lucia (appropriately named) designed the two wheels that displayed lamp-lit numerals in the windows that the Magi had once come through. The light shone out through glass-covered cutouts in the metal wheels.

When I was there, I noticed a strange whirring clunk that happened every five minutes; this was the minute wheel regulator going off, and the wheel doing its turn to the next display panel. It was quite extraordinary to be privy to this mechanism, as it's very beautiful from the inside:

Note the triangular frames hanging from the ceiling. These have small, strong metal hooks on them which are hooked onto the number-wheels, allowing them to be easily disengaged and drawn backwards into the room for those days during Ascension when the Magi are once again attached to their wheel (on the floor) and allowed to parade past Mary.

There are two faces to the clock, both driven by the same movement: one of them, elaborate and decorative, faces the Doge's Palace and the Piazza San Marco, for the Doge to look at (and presumably all the Senators and so on who ran the government from the Palace). The other one was for the regular people, who lived outside the square; this one was very simple, though still elegant. 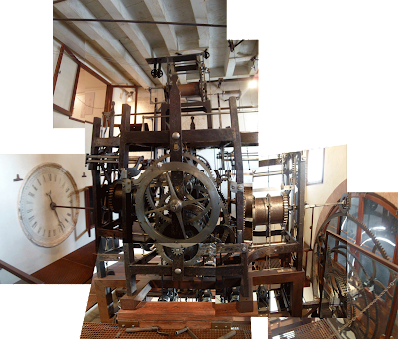 Nowadays, the clock is driven by "weights" which are actually wheels on bicycle-type chains, pulled or lifted daily by electric motors. This was based on a decision not to rely on a temperatore to pull the weights down each day and wind the movement. It is the only part of the 1750's mechanism which has been completely modernized. 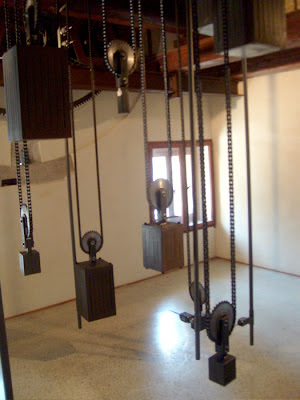 I was intrigued and impressed as I followed our guide, not only because it's the kind of thing most of us dream of - living in a tower with a bunch of clockwork - but because so much of the place was designed with beauty and functionality hand-in-hand. I do love the Enlightenment and Victorian eras' penchant for lovely design! Here, for example, is the top floor, before you climb to the rooftop where the bell-ringers stand: 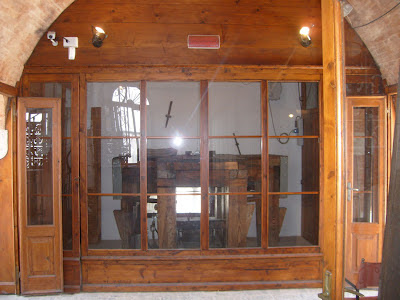 Or this rooftop structure which tops the spiral stairs and keeps them watertight: 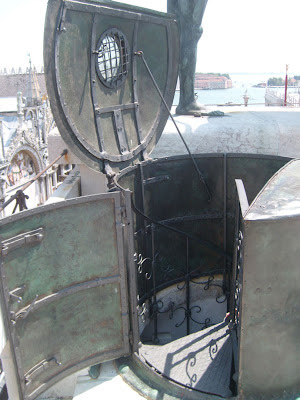 I mean, really! Captain Nemo, where are you??

One of the best parts of this tour was being taken out onto the roof to see the high-Rennaissance Moors, who look about double life-size. It was so great to get up close and see the difference in their faces and poses, and understand, finally, not only how the pivot at their waists were so beautifully disguised, but to have the mechanism explained: inside their legs is a rod which turns each of them; if you look at the main clock mechanism (above) you will see a large wheel with notches in it. If you look closely, you may see that there is one notch, followed by two notches, followed by three, and so on: the wheel is actually a great cam, which moves the bell-ringers to ring the appropriate number of times.

There are two of these cams, one on each side of the clock mechanism, to drive the two Moors.

Also, if you notice there is a double cable going up to a small hammer on the edge of the bell. This was put there as part of the 1752 mechanism; at midnight every night, every blow to the bell by the Moors is relived via this little hammer: 132 blows. Whether this is a sort of "rewind" feature, or a "design feature" (or some combination of the two), I have not yet discovered.

I feel so lucky to have found this tour, which I found through an idle inquiry at the Tourist Information office at Piazza San Marco. Since then, I have tried to find the name of the place we bought our tickets, but every online source seems to try to sell them to you at great expense. It was (somewhat) cheaper in person - just enquire, as I did, and they will direct you to the nearby gallery where you can book a spot on a tour (and where there is a wonderful miniature of the tower and its mechanism). You must book it ahead of time, and show up early, as you are taken in a group over to the tower and let in the little door at the bottom (a curiously thrilling moment). When we went, it was a tour of two - my daughter and I had the place to ourselves.

I am hoping to get permission to go up in the clock in the cathedral at Strasbourg on our way through in ten days. Wish me luck!

Wikipedia, of course, has a bunch of information about the various restorations and attendant controversies.

I read the book Daughter of Venice with my daughter before going to Venice (heh), and it really put us in the mood - and filled in some details about Venetian history. It's about a girl living in 16th century Venice and is full of interesting details about what life was like for women and how families worked to keep their wealth. It describes some aspects of the governmental system of Venice and the kind of wrangling that was always going on. Great book! ...In the Young Adult section, like many good books, but readable by all ages, I think. Unfortunately, though, it doesn't discuss the clock tower in any detail.
at 6/29/2008

This was wonderful. I don't mean to single out just one post, everything here is great; and yet you may have helped me to identify a new unsolvable fetish for me regarding large clocks. Am I the only one like this? I choose to preserve the compelling fantasy of baroque clockwork by being unwilling to buckle down and understand how its logic works. It's just more beautiful to me without the label. Willful anti-education? Meaningful ignorance? I never knew this about me and clocks before. Your composite collage of the works is just thrilling, a streamlined system disjointed.

Anyway, to single even further out, this:

"...Giovanni Doria, the temperatore of the time"

was freakin' sublime. I had a lot of fun reading this post, a continuation of the time I have been having reading your blog in general. Thank you.

Beautiful isn't it. I travelled there specifically to see this clock, only to find it draped in scaffolding! Thank you so much for the virtual tour. I'll try again one day.

Yes! I felt so happy that had come down before we went.

An amazing place, thanks for the tip!

I hope you don't mind if I link this post to my San Marco lecture slide list. Some of my more curious students would find it really interesting, and it'll add dimension to my focus on the basilica and the piazza. Thanks for a most interesting read!

very nice
I want to know more then
peace..

Because of your enthusiastic description and the wonderful pictures I took the tour myself last week, when I happened to be in Venice. It really is one of the most fascinating tours to do in the city.
And indeed kind of hard to find out about, but you can get the tickets at the Museo Correr on the San Marco square.

Oh and thanks for keeping a blog that always makes me want to draw!

Congratulations! The very best information about the clock-tower I could find. Thank You for Your wonderful pictures and descriptions.
Victor from Aachen, Germany

Was just in Venice and got to see the clock perform all of its tricks. My guide told me how lucky I was to see the figures that only come out at certain times. Must take the tour of the interior next time I'm there. Many thanks for your blog.