Wunderkammern vs. Cabinets of Curiosity

I happened across an interesting article in Cabinet Magazine by Celeste Olalquiaga about, among other things, the difference between Wunderkammern, which were early expressions of wonder and awe at the world and what it could produce, and curiosity cabinets, which came later and were really about early scientific efforts to master and control nature by creating strict taxonomies - by, essentially, demarcating the natural world in a "divide and conquer" flurry of examination, collection, and cataloguing.

Ms. Olalquiaga makes an interesting point about the change from collection-as-expression-of-wonder to collection-as-analytical-vehicle. She claims that with the paradigm shift from the theologically-driven 1500s to the analytically-driven 1700s, Wunderkammern underwent a demotion from the grand and exquisite collections of kings to the literal cabinets of the bourgeoise. The Wunderkammern of royalty was literally disassembled, separated into collections of man-made things, which were housed in Kunstkammern (art galleries), and natural things, which were put in curiosity cabinets and designated with the new, "scientific" categorizations.

"Unlike the Wunderkammern, where the elements of what we now call natural history were mainly objects of puzzlement and awe...the curiosity cabinets of the seventeenth and eighteenth centuries mark the onset of a desire to grasp and control the mystery which made of nature such an enthralling realm. Once Wunderkammern began to lose their allure in the face of, among other things, a colonial expansion that made their treasures far more familiar and available than befits a bona fide object of wonder, the curiosity cabinet became the privileged form of exhibiting such goods."

To those of us in the modern world, this era's idea of "scientific" seems quaint, even ignorant, based as it was on similarities that were at times nearly arbitrary - but nonetheless, it was the seeds of science today, with its emphasis on why and how, its need to separate things into groups, segments, divisions. 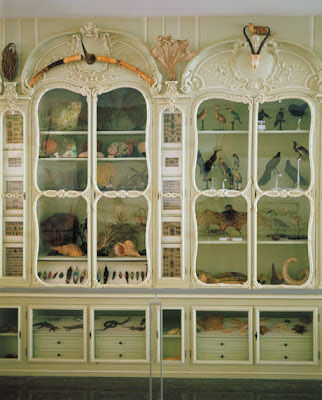 This change in our view of nature was revolutionary, as people began to discover that they could actually figure things out by observation and deduction. That, and the colonization of the globe, meant that from an ever-present environment that was unpredictable and dangerous, nature began to be understandable and even tameable. The old adage that "education defeats fear" means that what was once the arena of God, unknowable and all-powerful, now becomes knowable, conquerable: each window of understanding becomes a view into the possibilities of what can be learned, what can be known. And therefore, being known, it ceases to hold power over us.

I've been having a number of conversations with my friend Gwyan over at Salt in the Code about The Sublime recently. The sublime is a concept that was first imagined in the first century AD by Longinus (but not really rediscovered until the sixteenth century), for whom the sublime was about greatness, loftiness, and elevation, inspiring awe and veneration. 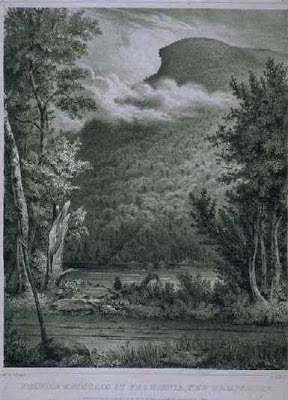 However, in the early 18th century, three Englishmen - Anthony Ashley Cooper (third earl of Shaftesbury), John Dennis, and Joseph Addison - made separate journeys across the Alps to visit Italy, and were struck by the experience. They wrote about the mountains, and the conflicting emotions the landscape raised, in terms of the sublime - but with a new twist: the sense of loftiness, yes, and veneration, but also a sense of terror at the way the mountains made them feel small and insignificant. The landscape could be so vast and twisted, so gnawed by the elements, that it evoked both asthetic fascination and a sort of horror. There is power, and even beauty, within the sublime, but beauty, in the discussions of asthetics of the day, was a calm emotion, whereas the sublime brought on a sense of agitation and awe.

"John Dennis was the first to publish his comments in a journal letter published as Miscellanies in 1693, giving an account of crossing the Alps where, contrary to his prior feelings for the beauty of nature as a "delight that is consistent with reason", the experience of the journey was at once a pleasure to the eye as music is to the ear, but "mingled with Horrours, and sometimes almost with despair." [wiki]

Kant wrote a whole treatise on the subject, called Observations on the Feeling of the Beautiful and Sublime:

"There are two kinds of finer feeling: the feeling of the sublime and the feeling of the beautiful. Kant gives examples of these pleasant feelings. Some of his examples of feelings of the beautiful are the sight of flower beds, grazing flocks, and daylight. Feelings of the sublime are the result of seeing mountain peaks, raging storms, and night." [wiki] 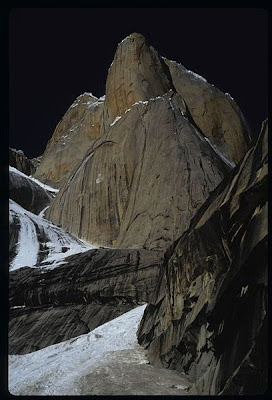 "...the word naturally expressed high admiration, and usually implied a strong emotional effect, which, in the latter years of the century, frequently turned on terror" Samuel Holt Monk, The Sublime

Previous to this, mountains had been seen as blemishes, even warts, defacing the beauty of the earth, and there had been great theological controversy in the late seventeenth and early eighteenth centuries about whether mountains and other natural formations came as a result of the earth being a ruin of man's fall from grace. One man, Thomas Burnet, even claimed in 1681 that the earth before the Deluge had been smooth and perfect.

This coincides almost exactly with the same time period that Ms. Olalquiaga describes, where Wunderkammern transformed into Cabinets of Curiosity. As the wonders in people's hands and shelves began to diminish in wonder-power, the urge to turn to larger, grander themes began to appear, and the writings of people like John Dennis became a subject of fascination: the more explored the world became, the more people sought to find that sense of wonder through travel and grandiose art, until The Picturesque, a product of the Romantic movement's mashup of Beauty and the Sublime, made its way into the limelight. 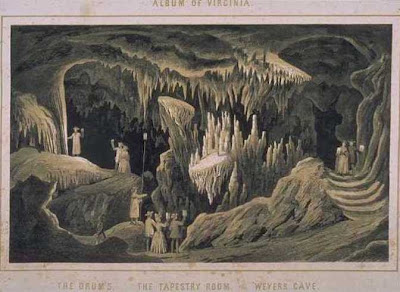 At which point it might be said that the search for wonder was brought, so to speak, into our own backyards. Twisted trees, dark grottos, and strange pseudo-ruins became all the rage, for example, in English landscape design by the end of the eighteenth century, and English people began to travel, not to Europe for the Grand Tour, but at home around the British Isles, looking for wild landscapes and broken remnants. Instead of awe, the search was on to capture Wild Nature and contain it:

"The irregular, anti-classical, ruins and even ruined people - the ragged poor (viewed from a safe distance of course) - became sought after themes. Picturesque-hunters began crowding the Lake District to make sketches..As Malcolm Andrews remarks, there is 'something of the big-game hunter in these tourists, boasting of their encounters with savage landscapes, "capturing" wild scenes, and "fixing" them as pictorial trophies in order to sell them or hang them up in frames on their drawing room walls.'" [wiki]

Thus, as the grandeur of the mountains was reduced and carried into the drawing-rooms of the middle class, so the effects of the Wunderkammern were being divided up and handed out into those same kinds of drawing-rooms, as objects of curiosity and conversation, symbols of our coming ascendency over Nature and the World: little windows into our eventual conquest of things both wondrous and frightening.
at 1/20/2008

You write very well, a pleasure to read.

What a great and enlightening post. I've only recently learned about the entire concept and history of the cabinets of curiosities, but they resonate with my collecting and sensibilities. I was very pleased to come across your great site and look forward to digging deeper. Great work!

thank you this, lot's of interesting points.
I am researching cabinet's of curiosities for my college project and you have given me lot's of things to think about.

There is an exhibit at the Denver MOA right now about curiosity cabinets!

Wow! The handiwork on these are astounding- must have taken them quite a while.