Bringing in the New Years' With Steam 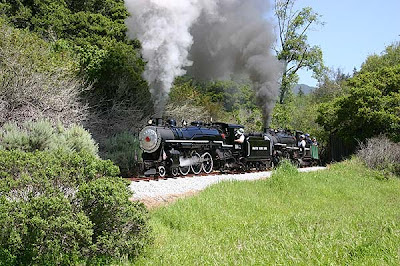 As we walked in along the wet and muddy gravel road through the crisp darkness from where we had parked our car, the children shrieked with glee and went running ahead, toward the large grassy clearing and the little train station, now lit with Christmas lights. A large bonfire burned at the other end of the frost-covered grass, and people stood huddled around it, drinking hot cider from paper cups. In the distance the train whistle sounded, and we knew we'd arrived in time to catch the 11:00 pm run of the Swanton Pacific Railroad.

The Swanton Pacific was the child of entrepeneur and train man Al Smith, who lost a leg working for Southern Pacific, and later made his fortune parlaying the family hardware business into a successful chain which allowed him to retire and concentrate on his first love: trains. With some of his savings he bought two of the engines that were built to run the Overfair Railway, a small-scale railroad installed in San Francisco for the Panama-Pacific International Exposition of 1915: built along the lines (with improvements) of Southern Pacific's 4-6-2 Pacific type engines, they were 1/3 scale with an unusual 19-inch gauge track.

At the Expo the Overfair Railway circled the Machinery Palace (!) and went on past the San Francisco Bay, where it turned and ran along the edges of the fairground. Eighteen million people came to the Exposition, which completely -and fancifully - rebuilt parts of San Francisco, and of course, many of them rode the train. Where else could you get a ride behind a real Pacific locomotive for a dime? 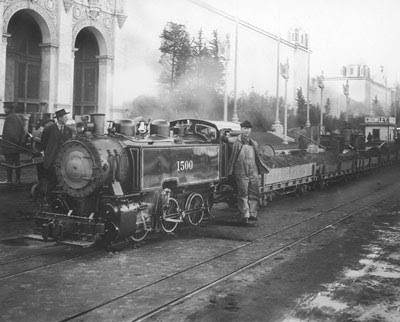 The Overfair Railway, with the 1500 engine, which was built primarily to help with the building of the railway. Note the cars full of dirt (?). This 1500 engine was recently bought by Cal Poly, who are working on restoring it at their San Luis Obispo campus.

Mr. Smith, a quiet and kind man who went to Cal Poly State University to learn agriculture after he lost his leg, eventually bought 3,000 acres of land at the site of the old town of Swanton:

"...south of San Francisco and... north of Santa Cruz, inland from the Pacific Ocean, is the small community of Swanton. From 1906 to 1920, Swanton was the north end of the southern division of the Ocean Shore Railway. At Swanton, passengers boarded a 10-seat Stanley Steamer bus that filled the twenty-six-mile trackless gap between Swanton and Tunitas. Here, they again boarded a steam train to continue their trip to San Francisco. Swanton was to provide the new home for the Overfair Railway."

Being a local girl, I've heard all my life about this trip, where people got out of the train and into the steam-powered Stanley Motor Carriage bus, which took them out to the beach and then down past the cliffs at low tide, to fetch up after a wild and trackless overland ride -26 miles total - at Tunitas, where they again boarded a steam-powered train for San Francisco. The whole thing captures the imagination: the adventurousness, the wait for the tide and the wild dash across rocks and sand, all the luggage and bustle and steam at the small rural stations... 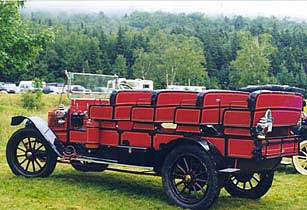 Now all these are gone, even the town of Swanton; but clearly the story captured Mr. Smith's imagination, too, for he chose this spot to buy land for his railroad, and proceeded to build, with volunteer labor, a track that ran partly along the old abandoned Ocean Shore Railway right-of-way, with a station within walking distance of the old Swanton stopping-point which no longer exists (most of the town was lost in a flood in the 1950s). I'm not much of a train geek, but these engines are beautiful. They are complete down to every detail, not merely reproductions but real locomotives in a smaller scale, built by a rich perfectionist. Mr. Smith loved them. He laid several miles of track, with the aim of laying it all the way to the coastal land; but floods and Mr. Smith's death in 1993 delayed this goal, and after his death the Swanton Pacific Ranch was willed to Cal Poly, who use it for sustainable agriculture projects and, you guessed it, steam locomotion studies.

There are loads of little railways like this one tucked away across the countryside, known mostly to train people, but also open, as the Swanton Pacific Railroad is, to the public in some capacity. And if you're lucky, you'll be on the inside, around for those special events, the ones the public isn't invited to, the ones that are magic.

So every New Years' Eve, the locals and some select few train afficionados gather to talk quietly between shrieking children and laughing teenagers, to celebrate the new year and to ride the train out into the dark, under the stars. We climb into the small wooden cars and take off, away from the warmth and light of the fire and the clear glow of the tiny station, into the forest, where the steam pours out in a large cottony swath and hangs in the naked branches of the dark trees, and we all huddle under blankets and stare upward, marveling.

- Images of the Exposition, very cool. I can't believe they put all this up just to take it all down again!
- One of many, many souvenir guidebooks of the Exposition - great pics of buildings that were pulled down as soon as the Expo was over, to our modern chagrin.
- Great article on the history of these engines from The Virtual Museum of San Francisco
- Article about Cal Poly's love affair with steam from the Chronicle of Higher Education
- Some rail geek pictures of the train
- Video of engine #1914 running in midsummer
at 1/01/2008