The Shapes of Things We See 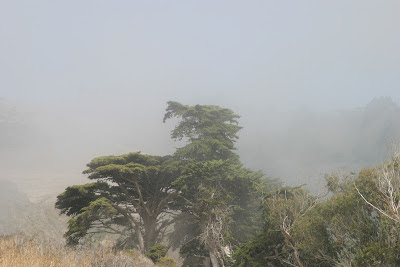 I heard this about fifteen times in varying degrees of attention, going round a certain curve, before I saw it: a tree shaped exactly like a smiling dragon, with ear, tooth, and everything. And once it was there, I could never un-see it: it was only that, being children, they looked in directions that I had ceased to gaze.

So, the day I finally saw the dragon, I showed them my own favorite tree: the Witch Tree, which looks like a distant witch caught in the throes of dancing crazily. The Witch Tree, as you approach it, executes a quick and impossibly subtle metamorphosis into a boring old tree, like any other. I look and look, as much as I can when I am driving, but I can never catch the moment when it ceases being a witch. On this day they saw it immediately, to my satisfaction - there is nothing worse than someone saying, "Where? I can't see it; you mean that thing?" And not getting it at all. And of course, if you are looking at clouds, they change while you're watching, so even while you're pointing it out, it ceases to be itself and becomes something else entirely. Trees do this, too, but much more slowly. I finally had my camera in the car one day and pulled over to get a shot, but on examination I find that the dragon is past his prime: he is literally getting long in the tooth, and his ear is changing shape. Still, he greets us every day on the way to town.

When I was a kid, there was a little man who lived in the plaster texture they put on the drywall (plasterboard) next to my bed. Every morning when I woke up he was there, just at eye level. I remember finding him comforting, though I didn't like the vaguely triangular patch on the ceiling in the corner; it looked like some kind of carnivorous squid, waiting to swoop down.

As it turns out, I'm not alone. Seeing faces and shapes in organic or random things is extremely common -- is, in fact, part of human nature. Although the idea that face recognition is hardwired into us is under great controversy in the scientific world at the moment, everyone agrees that recognition of objects and faces is one of human perception's strongest points.

Pareidolia means the perception of vague and random stimuli as significant. In other words, our tendency to perceive faces in the clouds, the man in the moon, the dragon tree, and of course messages in records played backwards. Or people seeing Elvis in the mold on their refrigerator.

Wikipedia has a page on "Perceptions of Religious Imagery in Natural Phenomenon," which is fascinating to read, not because of the explanation but because the list of examples go on and on and on. People seeing the Virgin Mary in a grilled cheese sandwich, for example: 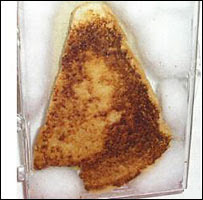 "On November 23, 2004, a grilled cheese sandwich that contained the likeness of the Virgin Mary was sold for $28,000 in an eBay auction by Diana Duyser from Hollywood, Florida. Duyser explained, 'I made this sandwich 10 years ago. When I took a bite out of it, I saw a face looking up at me - it was Virgin Mary staring back at me. I was in total shock.' She kept the toast surrounded by cotton wool, in a plastic container on a stand. Duyser claimed that although a decade old, the toast has not shown any sign of mold or crumbling, which she considered as 'a miracle'."

The shelf-life of Wonder Bread and American cheese aside, it astonishes me the lengths people go to preserve the things they see. The NunBun, a cinnamon bun in which a worker saw the face of Mother Theresa, stayed on display in the bakery where it was made for over nine years: 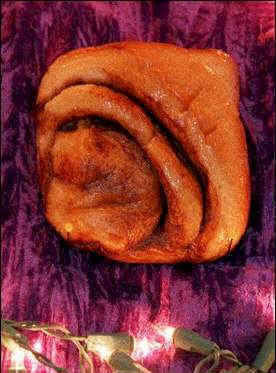 "The face of Mother Teresa was seen in a cinnamon bun at Bongo Java in Nashville, Tennessee. It was first discovered on 15 October 1996 by employee Ryan Finney and was turned into an enterprise by the company, selling T-shirts and mugs. Mother Teresa contacted the company and asked them to stop these sales. Discussions between the cafe owner and Mother Teresa's attorney brought about a compromise. The cafe agreed to only sell a limited amount NunBun merchandise and sell it only at their store and not license the images. The bun remained as an attraction at Bongo Java. On 25 December 2005 the bun was stolen during a break-in at the coffee house.

The owner of Bongo Java have offered a $5,000 reward for the return of the NunBun. Recently, photographs of the pastry have been sent to the Nashville, TN newspaper The Tennessean from a person identifying themselves as "Hu Dunet." It shows the NunBun near a statue of a woman, a picture showing it being held by two men, their faces obscured by alterations to the photograph, and a picture of a man lying on a beach holding the bun in his left hand."

It is interesting how this phenomenon can give such comfort, while in other areas it creates such fear. Take, for example, the creeping horrors of seeing a snake in the folds of your pillowcase in the moonlight. Or the awful way that your inflatable pterodactyl's hanging shadow looks like a giant spider on the wall. Or what about the horrible hand-like branches that scrape at your windows in a wind-storm? 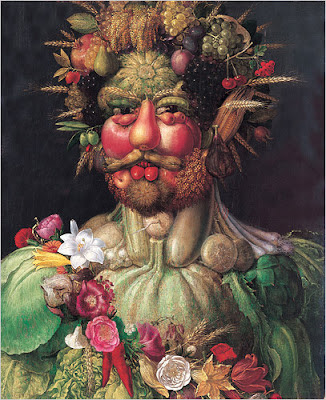 Worse, apparently, is the inability to make sense of one's world. Oliver Sacks' interesting story "To See And Not See", from An Anthropologist on Mars, tells the story of "Virgil", a man who hadn't been able to see since he was a young infant, more than forty years previously. An operation was conducted on the man, which in some senses ruined his life -- making him more helpless than he had been when he was blind, because he had to deal constantly with a new sense that he had had no time to make sense of, after living in a world of felt shapes and imagined distances all his life.

"The rest of us, born sighted, can scarcely imagine such confusion. For we, born with a full complement of senses, and correlating these, one with the other, create a sight world from the start, a world of visual objects and concepts and meanings. When we open our eyes each morning, it is upon a world we have spent a lifetime learning to see. We are not given the world: we make our world through incessant experience, categorization, memory, reconnection. But when Virgil opened his eye, after being blind for forty-five years—having had little more than an infant’s visual experience, and this long forgotten—there were no visual memories to support a perception; there was no world of experience and meaning awaiting him. He saw, but what he saw had no coherence. His retina and optic nerve were active, transmitting impulses, but his brain could make no sense of them; he was, as neurologists say, agnosic.

"...Further problems became apparent as we spent the day with Virgil. He would pick up details incessantly—an angle, an edge, a color, a movement—but would not be able to synthe size them, to form a complex perception at a glance. This was one reason the cat, visually, was so puzzling: he would see a paw, the nose, the tail, an ear, but could not see all of them together, see the cat as a whole."

Later, Sacks tells us of Virgil's ultimate fate: "...He found himself between two worlds, at home in neither—a torment from which no escape seemed possible. But then, paradoxically, a release was given, in the form of a second and now final blindness—a blindness he received as a gift. Now, at last, Virgil is allowed to not see, allowed to escape from the glaring, confusing world of sight and space, and to return to his own true being, the intimate, concentrated world of the other senses that had been his home for almost fifty years."

The proponents of the hardwired-newborns view of how we organize recognition tend to point to the inferior temporal gyrus and the fusiform gyrus (also active in grapheme/color synesthesia!), a "small patch of right-brain tissue just behind the ear", as the place that holds the key to our ability to recognize things. The non-hardwired contingent hold that "the behind-the-ear brain area...actually coordinates all sorts of expert visual judgments. It's just as crucial for making deft distinctions among classic cars, bird species, and imaginary creatures with no faces as it is for recognizing pictures of one's high school classmates. Damage to this part of the brain hinders object recognition to a lesser extent than it does face recognition, but the effect is still noticeable" - which basically means, whichever camp you're in, that this area of the brain is crucial to our ability to weave the world together. [link]

So in a way, the way we make sense of the world of vision is based in our ability to find order where there might otherwise be none. It's in our nature to create order out of what our senses give us; without it, the world would be a meaningless jumble of pieces and parts, and love, religion, and art would not be able to exist as we know them. Neither would night-fears, or metaphor, or leaf-patterns on the wall. Or the little man who still sits, probably, on the wall of the room I had in the house where I grew up.

- Wikipedia's article on prosopagnosia, or "face blindness" (the inability to recognize faces)
- Wiki article on face perception, with all the attendant theories
at 1/31/2008

Great article!! I have seen objects and faces as well in the crow's feet texture of my walls. Some of them very vivid!!

Here in Seattle, my sister and I have "The Jesus Tree" that we point out next to the freeway whenever we are going to visit our parents. It looks like Jesus standing, head back, arms outstretched.

Since neither of us are religious at all, it must be a striking resemblance! :-)

Where I currently live, there are two small faces in two doorframes - they both look like the expression on the character "Calcifer" from the anime "Howls Moving Castle". The resemblance is striking and every time I open my bedroom door I expect one to open its stress-fracture eyes and yell at me.