The Wonder of the Golden Proportions 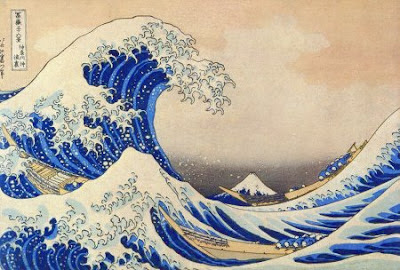 Ever hear of the Golden Mean? Neither had I, until I was supposed to teach a graphic design course, and started (you know me) to do research on what, exactly, I should be teaching. It's one thing to be able to design things, and quite another to have to teach it to others.

A lot of what I found, gestalt theory and the principles of visual weight, and so on, were really interesting; but the Golden Mean was what really caught my fancy.

(NB: Math following. Don't be scared, all will be clear [and un-mathlike] in the end, I promise. I hope)

The Golden Mean, also known as the Golden Ratio, was developed as a proportional measurement by the ancient Greeks, as a way of making the most pleasing artworks. It was felt to be semi-divine, in that it seemed to show up in Nature as well. The ratio, an irrational number, began as 1.6180339887... and continued onward, pretty much forever. It is found by working out the following algebraic equation:

Essentially, if you take a line that is 1 long, and go from there, you will find that the above equation will work out to that same irrational number, which, when used as a proportional device, allows you to produce varying lengths of lines that are smaller and larger. But I'm not going to explain how, because though I really, really love math, I don't do well with equations, which are difficult for me: at least, to express the near-mystical magic that shows up in numbers.

So: now you have a bunch of varying line lengths. So what?

Well, let's see: take one of these lines and make a square out of it (putting four of them at right angles to each other, remember? I sometimes blank on these little leaps of logic). Then, starting at the center of one side, measure to one corner and draw an arc downward: 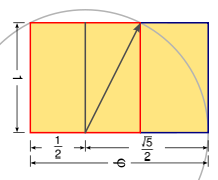 Aha! Now we start to have something. If the length of the square is 1, then the length of the rectangle (shown as the Greek letter phi here) is, of course, 1.6180339887... well, you get the point: the Greeks were smart. We call this shape the Golden Rectangle, and you can find it everywhere in Greek and Renaissance art (and elsewhere! Stage height proportions, window shapes, chair backs, believe me, they're everywhere. They are quite pleasing to the eye).

(If you really want to know the equation looks like this:)

(but don't ask me to explain that part). 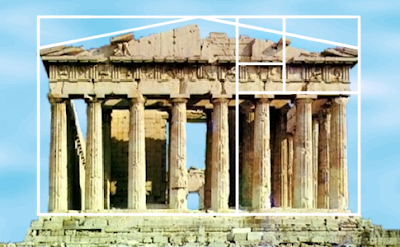 Golden rectangles in the proportions of the Parthenon

Okay, onwards. I know this is looking like a lot of math, but bear with me here. Now we come to this guy named Fibonacci, born c.1170, who is considered "one of the most talented mathematicians of the Middle Ages" [wiki]. This is the man responsible for the introduction of the Hindu-Arabic numeral system when all of Europe was doing math in Roman numerals (I strongly urge you to read his link, above: it's fascinating). He used what is now known as the Fibonacci sequence - actually a pre-6th-century Indian concept - as an example in his famous and apparently brilliant book about math, Liber Abaci, or Book of Calculation, which is why we have it now. In any case, the Fibonacci Sequence, as it is now known, leads to all kinds of interesting events.

Try this. Draw a square, measuring one unit across (make it a small unit, like a centimeter, or perhaps the distance between binder-paper lines - otherwise you will need big paper). Now draw another square exactly the same right up alongside it (so they are sharing a side). Now, say you take the line along the top of both squares and use that to draw a bigger square, which of course is two units on a side - right? Okay, now moving clockwise (or counter-clockwise, like the picture below) around this construction, draw another square along the side where the edge of the big square and one small square align. Keep going clockwise and keep drawing bigger and bigger squares. The length of each consecutive square should make a sequence, like this: 0, 1, 1, 2, 3, 5, 8, 13, 21, 34, 55, 89... (by now you've probably run out of paper). Viola! Your own personal Fibonacci sequence, right there in your own home! And...lookie there. It sure looks kind of like...is it? Pretty close to a Golden Rectangle, isn't it?

Okay, okay, you say. That's kind of neat. But aren't we just wanking with numbers?

Well, perhaps. But check this out. You can draw an arc, starting with a point at the middle of the two first squares where they touch the third square. The arc goes from corner to corner of each square, so that the two squares together make a semicircle. Then, by expanding the arc and drawing one in each square, working around the structure, you can build a lovely spiral: 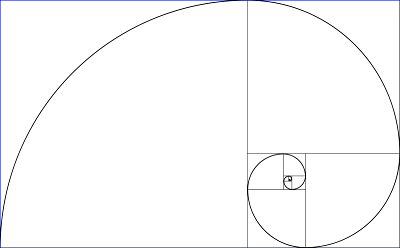 This Fibonacci spiral does not have the two original squares visible

This spiral is one that closely mimics the Golden Spiral, based on the Golden Mean, above. The main difference is that the Golden Mean goes in both directions, both up and down, whereas the Fibonacci spiral only goes upwards from 1 (though you could take it down if you were into math, I'm sure). Both are considered logarithmic spirals, which are found everywhere in nature. Jakob Bernouli, a mathematician from a great family of brilliant people, called the logarithmic spiral spira mirabilis, or "the Miraculous Spiral," so called because the size increases but its shape is unaltered with each successive curve. This kind of spiral shows up in shells, in hurricanes, in the shape of a cat's claw or a wave; galaxies and flowers all work with logarithmic spirals. The Fibonacci sequence can be found many places as well, such as in the ancestry patterns of bees, the branching of trees, the whorls of a sunflower and the fruitlets of a pineapple.

Technically, though, the Fibonacci spiral has a slight wobble; it is not perfect, so not really a proper logarithmic spiral.

Which brings me to something which I find absolutely wonderful: if you chart that wobble on a graph, it begins to look as if it is ocillating around something, some specific number. Guess which number?

You guessed it. Now tell me there's no mystery in numbers. 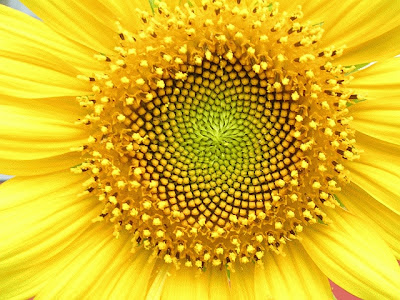 (For a nice, step by step, even better mathematical explanation of this, check out this site. It certainly got me going.)
at 9/12/2007

I notice you put mention of art, architecture and nature in your discussion, but managed to forget about music. In works from the"common practice period", a HUGE number of works use the golden mean as a formal device. Usually, the golden mean of the composition was at a point just before the last transition section going into the recapitulation. Beethoven, on at least one occasion, even composed so that, if measures repeated were included the golden mean was at one end of the transition, and if you did not include the repeated material, it was at the other.

I've known about the golden mean for a very long time, but now I understand it in a new way.

I've seen people start with a rectangle and divide it up, which seemed kinda arbitrary to me in some ways. Now I grasp how it goes outward

Aah, something I have actually read about. I've been teching myself graphic design and bought some wonderful books; which explained all about the Fibonacci numbers. They are the basis on which out A-size paper is based upon and helps immensely when it comes to layout, not only art but print-based such as magazines and so on.

Can't help but wonder if the tutors at my university actually teach this stuff- although judging by some of the work I've seen, probably now ;)

Unfortunately, an awful lot of what's out there about the golden ratio doesn't really hold up under closer inspection. The picture of the Parthenon you've got here is a good example. Where you view a rectangle from has a big impact on the perceived ratio of the sides. Also, commonly used ratios in architecture in ancient times approximate the golden ratio pretty well, but that doesn't mean their use has anything to do with the golden ratio, e.g., 5:3 is about 1.666, which isn't too horribly far from 1.618. However, while what we now call the golden ratio was known to Euclid (as the extreme and mean ratio) it isn't terribly likely that the designers of the Parthenon were aware of its existence, nor that they would have attached any importance to it if they did.

For more info check out http://webpages.ursinus.edu/gwilliams/MythsSite/greek%20parthenon.html (self link, sorry, but site includes references to text sources that are relevant).

Ah, Mr. Byron, you caught me out: music knowledge is my thin point. Of course, you are right. Coming from the visual art side of things, I am naturally fascinated by that part. My apologies.

Just wanted to add that modern knitters have a very high regard for Fibonacci. They use the Fibonacci sequence for planning out striping patterns in sweaters, socks, etc., because the sequence is more pleasing to the eye than other sequences.

The beauty in the golden ratio is an example of a mathematical aesthetic. Artistic aesthetics are generally cultural in nature. Pure mathematics does not express itself culturally furthermore; art is the expression of culture. Sure, cultures can express themselves mathematically but ‘math’ does not express itself that way. Mathematics is a universal language running across all cultures due to it being the expression of common human logic. I believe no artist in general (if ever) is going to accidentally stumble across the golden ratio unless they have been exposed to the mathematical beauty beforehand.