A Wonderful, Eccentric, Brilliant Man (and His Book) 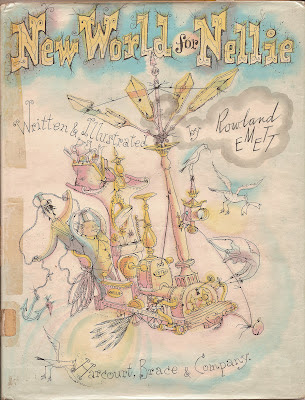 My father first bought this book in England in the 1950s, when he traveled to the UK to research his family tree in Scotland. My father is a Scots-Canadian, raised in Detroit, and a cartoonist at heart. He knew of Rowland Emett from Punch, and this book caught his fancy.

As a child, I found the book stuck into the bookshelf next to things like The Electric Koolaid Acid Test and Lord of the Rings (original binding, since my dad was the kind of person who was reading that stuff when it was published), and someone's cast-off version of Fear of Flying. which I suspect neither of them had read. I would read Nellie and marvel, in that way kids do at the age where they believe everything: at the wonderful elevated railway, which caught my fancy: 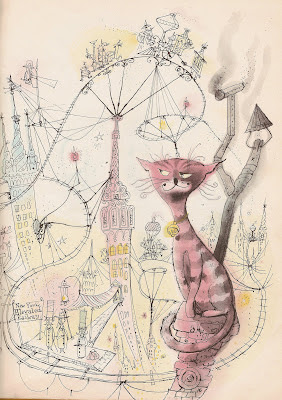 along with all the other wild and amazing adventures. I tried for years to make a twin-funneled paddle boat out of branches and string, like they did, but I never won any races.

The book captures some essential thing about being provincial, and English, and loving trains, particularly the small locals, which in the early 1960s Dr. Richard Beeching eviscerated, cutting nearly all the little local lines (and going down in infamy for its effect on the British way of life). Albert Funnel and Frederick Firedoor, Nellie's driver and "guard-fireman-and-porter", become upset because nobody in Cloud Cuckoo Valley or Duckwallow Marsh appreciate them, and so they get a wonderful idea: to turn Nellie into a flying machine and go somewhere else. They touch down in New York, where the members of the Philharmonic use parts of Nellie for a concert; then they look for some tracks heading South.

"They took Nellie down to the tracks, but were most upset to find she wouldn't fit and while they were wondering what ever to do they were gently scooped up by the cowcatcher of the Elmer K. Pheffenfeifer, which was just pulling out for the Deep South."

As you can see, American trains are of an entirely different order than that of small local English ones: 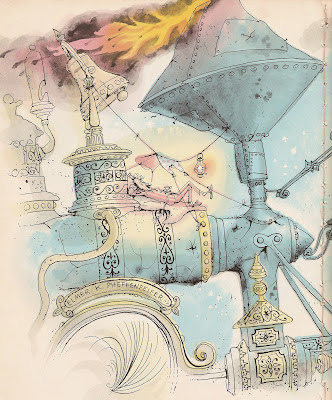 In the Deep South, Nellie becomes a paddle-boat for awhile to help one captain win the Grand Torchlight Race, then heads West where they rescue a damsel in distress who turns out to be part of a movie set (with a cardboard train about to run her over), and end up in the Smoky Patch Mountains, helping the tired gold-miners to mechanize their mining and their entertainment (using Nellie, of course), earning their fortunes and bringing back a miner friend to England (which they get to by buying diving gear and following the undersea telegraph cable). 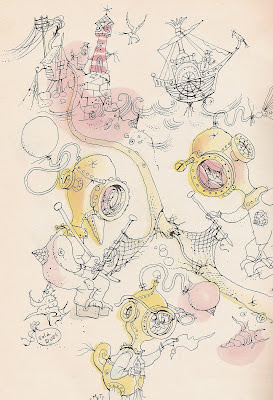 These divers are repairing the undersea telegraph cable with knitting needles. Note the bag of gold dust which they exchanged to Nellie's crew for diving gear, and the curtains inside the one man's helmet, which fascinated me as a child

The drawings are marvelous, spidery and full of little odd details, and completely fanciful, playing beautifully off the English preconceptions of America at the time.

So now I come to the part that thrills me. Just on the basis of this book, in the interests of this post, I went and looked Rowland Emett (sometimes called Roland Emett) on Wikipedia. What I saw there just blew me away: the man built all kinds of amazing machines, which showed in places like the 1951 Festival of Britain (for which he made a physical model of Nellie, among other wonderful machines) - and he designed the machines for the movie of Chitty Chitty Bang Bang. 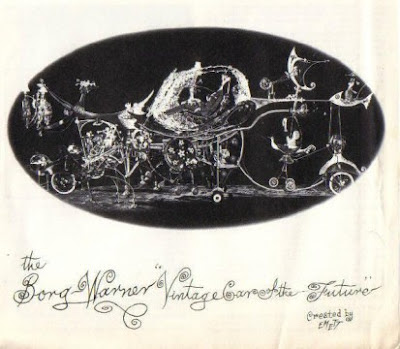 His SS Pussywillow (a mind-boggling machine) was featured on Brass Goggles, which is appropriate: his mechanical creations would appeal, for good reason, to the Steampunk community. The man was a total eccentric, with a marvelous imagination, and I feel privileged to have known this little story of his all my life. I still think it might be the coolest thing he did.

And I have to wonder: did Mr. Emett see something like Beeching on the horizon? Did he hope, in that lost way we writers have, that by encouraging this little bit of wonder and love for the tiny locals, he might help to save them? I suspect even in the early 1950s there was talk of trying to make the train system more efficient. Anyone who loves trains, especially the ones that get stopped by bicycles at crossings, must be influenced by the lovely fancy of this book - must see that the loss of trains like these, that went to places like Starfish Point, could only be a loss to the world at large. And if a gentle influence could have saved them, it would have been this one, for clearly, Mr. Emett understood about wonder.


More links:
- Rowland Emett machines: photos
- All kinds of info about him, including a timeline of his works and life
at 9/14/2007

A lot of rural railways were already losing their passenger services when Emett was writing and drawing. In 1896 the government had passed the Light Railways Act, which let companies build rural railways relatively cheaply given certain restrictions, normally including a blanket 25mph speed restriction. Existing railways could also become light railways, in order to reduce their running costs.

These railways were usually barely profitable, given that by 1896 very few areas of the UK did not have a railway service. They usually used second-hand engines and carriages, patched and rebuilt in various ways, and looked rather ramshackle and home-made. In the 1920s many lost their passenger services, and a lot had closed completely by the end of the 1930s. Nearly all had gone by the mid 1950s, although a lot were later re-opened as tourist and museum lines. In Wikipedia's list of 27 railways built as new under the 1896 Act, I can only see one that's still partly open as part of the national railway network.

I'm a first time visitor, just wanted to let you know that I really enjoy your project. You've got a lot of great things here!

The "Vintage Car of the Future" had been on display at Chicago's Museum of Science and Industry. I remember seeing it as a child. It had all sorts of crazy moving parts, and I also recall a it having a poodle. Why that sticks, I'm not certain. Having since moved away from Chicago, I am unable to confirm whether it is still there. His work appeals to the gnome in me, and now I must search out more, since I love Chitty-Chitty Bang-Bang. Thanks for posting all these amazing, lovely stories!

I met Roland Emett in 1952 when he visited my elementary school in Ohio. Recently had an excuse to pull out his New World for Nellie. Found his drawings as as fresh as today and ideas as hopeful as tomorrow. Thanks for putting the story together. Too bad that the details of his ingenious creations are fuzzy and do not come through on your "photos" link.

Yes I'm sorry about that detail thing; his work is simply too delicate to reproduce on the web very well!