The Song of the Passenger Pigeon 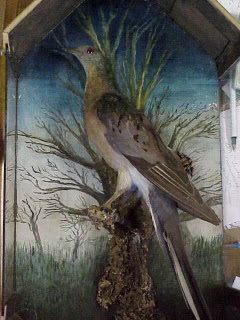 A mystery. My father told me a story about my grandmother, who grew up on a tiny island in the south end of Lake Erie: he said once, when she was very small, she was out in the fields with her father. She remembered this particularly because she wasn't often allowed out with him; it was a big deal.

So they were standing there, and the sky darkened, filled with birds. The birds stretched for as far as the eye could see and literally brought darkness into the day - for minutes upon minutes. She remembered asking her father what they were, and her father replying, "Passenger Pigeons."

This story fascinated me throughout my youth, because my own father then would explain to me that the last passenger pigeon, named Martha, died alone at the Cincinnati Zoo when my grandmother was seventeen.* The idea that the birds could go from that kind of crazy-populous to the lone bird dying while zookeepers stood and watched helplessly, just blew my mind. And something about my grandmother's story had a dreamlike quality: the two figures standing, holding hands, out in the field, while with a noise like a whirring, chattering storm, thousands and thousands of birds pass by.

It appealed to me, as it appealed to me that my grandmother grew up in a time without radios or cars, and then watched as first cars, then radios, then television and space travel, and finally, personal computers came to be. That plain old lady never ceased to stun me; in her I saw the most amazing kind of mortality, reflected as it was in the vast experience of age, and all the people left behind. What a life! And - how adaptable people are! 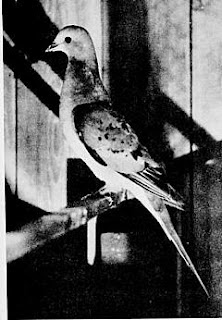 And yet, one of the reasons that the passenger pigeons did become extinct was because people didn't adapt, they didn't learn when to stop. They didn't look, or listen, or care. Here is a description by John James Audobon of a roosting-place, where the hunters waited to slaughter these graceful, gentle, slightly comical-looking birds:

"Many trees two feet in diameter, I observed, were broken off at no great distance from the ground; and the branches of many of the largest and tallest had given way, as if the forest had been swept by a tornado. Every thing proved to me that the number of birds resorting to this part of the forest must be immense beyond conception. As the period of their arrival approached, their foes anxiously prepared to receive them. Some were furnished with iron-pots containing sulfur, others with torches of pine-knots, many with poles, and the rest with guns. The sun was lost to our view, yet not a Pigeon had arrived. Every thing was ready, and all eyes were gazing on the clear sky, which appeared in glimpses amidst the tall trees. Suddenly there burst forth a general cry of "Here they come!" The noise which they made, though yet distant, reminded me of a hard gale at sea, passing through the rigging of a close-reefed vessel. As the birds arrived and passed over me, I felt a current of air that surprised me. Thousands were soon knocked down by the pole-men. The birds continued to pour in. The fires were lighted, and a magnificent, as well as wonderful and almost terrifying, sight presented itself. The Pigeons, arriving by thousands, alighted everywhere, one above another, until solid masses were formed on the branches all round. Here and there the perches gave way under the weight with a crash, and, falling to the ground, destroyed hundreds of the birds beneath, forcing down the dense groups with which every stick was loaded. It was a scene of uproar and confusion. I found it quite useless to speak, or even to shout to those persons who were nearest to me. Even the reports of the guns were seldom heard, and I was made aware of the firing only by seeing the shooters reloading.

"...The Pigeons were constantly coming, and it was past midnight before I perceived a decrease in the number of those that arrived. The uproar continued the whole night...Towards the approach of day, the noise in some measure subsided: long before objects were distinguishable, the Pigeons began to move off in a direction quite different from that in which they had arrived the evening before, and at sunrise all that were able to fly had disappeared. The howling of the wolves now reached our ears, and the foxes, lynxes, cougars, bears, raccoons, opossums and pole-cats were seen sneaking off, whilst eagles and hawks of different species, accompanied by a crowd of vultures, came to supplant them, and enjoy their share of the spoil.
It was then that the authors of all this devastation began their entry amongst the dead, the dying, and the mangled. The Pigeons were picked up and piled in heaps, until each had as many as he could possibly dispose of, when [hundreds of] hogs were let loose to feed on the remainder."

The birds were so abundant that another man describes this:

"In 1805 I saw schooners loaded in bulk with Pigeons caught up the Hudson river, coming in to the wharf at New York, when the birds sold for a cent a piece. I knew a man in Pennsylvania, who caught and killed upwards of 500 dozens in a clap-net in one day, sweeping sometimes twenty dozens or more at a single haul."

If one man in a day can catch and kill more than 6,000 birds, it is no longer hunting; it is a kind of inflation, mass ornicide. The Victorian Taxidermy site, to whom I owe many thanks for their fascinating and incredibly informative page on passenger pigeons, discusses some of the causes for the birds' extinction. Since they were known to double - or even quadruple - their numbers in a single season, it would take some doing to overcome that quantity of population. Not unreasonably, it's believed that a combination of factors caused their demise. For one thing, they needed vast quantities of old-growth forest to roost and eat in, which by 1900 was rapidly dwindling (imagine how much food they ate! That's a whole nother question). Another factor was the relentlessness of the slaughter. As the VT site says, "The pigeons were subjected to shooting on the widest and most devastating scale. They were never free from persecution at any time of the year. They were hunted in spring at the beginning of nesting which was most disastrous, where the fat squabs were always considered a delicacy, later young birds in summer were much sought after, and finally adults were taken at all times. The pigeon had no peace." 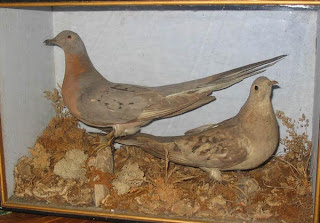 Lastly, and most curiously, there is a theory that the pigeons simply didn't do well in decreased numbers. They were used to a living environment where they didn't need to be cautious; their numerousness made them indestructible. Not only were the birds in lesser numbers just as easy to catch as they'd been in larger numbers, but in psychological terms, they didn't function well. It's possible they felt vulnerable, and simply gave up breeding: they were stressed, and their breeding-places were as unsafe as everywhere else.

Oddly, looking at the history and the statistics, I've found my grandmother couldn't have seen passenger pigeons flying over in that number. The last recorded kill of wild passenger pigeons was when she was two years old. They hadn't flown that thickly since before she was born.

So where did the story come from? Did a large flock of birds fly over and prompt her father to tell her about seeing passenger pigeons when he was young, causing some kind of false memory? Did her father incorrectly identify some other kind of numerous bird? Or did she in fact see the very last flight of the birds? One of the last recorded collections of birds was reported in Ohio, at the right time and not far from her island, though it seems very unlikely they would be as thick as she describes. But I will never know, for she died thirteen years ago at the age of ninety-seven, and I can't ask her. She was always a nature-lover, communing with birds and shore. My elder daughter bears her name.

The book "1491" summarizes scientific arguments suggesting that in pre-Columbian America passenger pigeons were not numerous at all, because their numbers were controlled by hunting, and that only the massive deaths of Native American populations due to European microbes caused the passenger pigeon populations to boom to such hordes.

Fascinating. It does seem, when reading the descriptions, that there is something vaguely unnatural about the numbers of birds all trying to roost together. I'll have to look at that. Thanks!

I think your grandmother was most likely right about seeing passenger pigeons. The extinction of this species was greatly oversensationalized by the press simply to sell more papers. The death of Marth(the last living pigeon in captivity) was true. She was the last of her kind in captivity but apparrently these birds do much better in the wild. The truth is they never went extinct and can still be found in small numbers today.

I know this to be true because I have seen them for myself. I didn't just see them. I observed and photographed them as well. By the end of the summer I should have more than sufficent evidence to prove this to be fact. The story of the passenger pigeon is not yet over. They are small in numbers but still breeding here in the Appalachain Mountains of Pennsylvania.

I have never seen a satisfactory answer as to how flocks of literally billions of birds disappeared so quickly, no matter how many were shot and netted. There were just too many and they were too successful a species to disappear entirely. I hope that the last poster does have some evidence for them! Maybe they were subsumed into the population of mourning doves or similar birds, much as the oriole species have merged.

Do you have any plans of publishing these Passenger Pigeon pictures?

They are not my photos, they came from a taxidermy site which I could find but don't have time to look for right now. But if you do an image search for "passenger pigeon" you're bound to find them.

If anyone would like to read more about the remnant population of Passenger Pigeons here is a link. http://www.trackincats.com/phpBB2/viewtopic.php?t=1127&start=0