The Adventures of Prince Achmed (and other shadow beings) 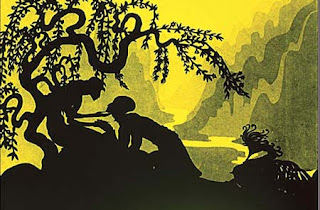 My friend Gwyan lent me this film, and I am forever in his debt, for it is one of the most amazing films I've ever seen.

I've been fascinated by shadow puppetry since I was a teenager, when I had an anthropology teacher who was an expert on Bali. She showed us Balinese dancing and Balinese shadow puppets, among other things, and thus my introduction to Wayang theatre, or Indonesian shadow puppet theatre. In my first novel (as yet unpublished), the Wayang plays an important role, as in some parts of Java, in certain situations, it is used as an exorcism ceremony.

Lotte Reiniger was one of those peculiarly creative souls who was lucky enough to have the support and resources to follow her interest - and her interest, from a young child, was silhouettes. She even built her own theatre, so she could put on silhouette performances for her family and friends. Through a series of fortunate circumstances, she was able to work her way into a select group of avant-garde filmmakers and artists and thus begin making short films using silhouettes, and animation techniques that were, at that time, very new.

She was quite successful, and in 1923 she was the recipient of a large amount of raw film, and so was able to set about creating a longer film, now the oldest surviving feature-length animation. Reiniger anticipated Walt Disney and Ub Iwerks by a decade by devising the first multi-plane camera for certain effects, and her animation - in detail, subtlety, and sheer design sense - is stunning. 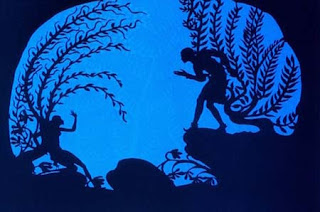 Apparently, the original print was lost in World War ll bombing; all German nitrate prints, which had colored backgrounds, were lost as well. The only remaining prints were all black and white, and even then only fragments were found. Working from these surviving bits, German and British archivists have restored the film including adding back the original delicately-tinted pastel backgrounds, which enliven the lovely background designs of Walther Ruttmann.

The extraordinary thing about this film is its obvious brilliance. Working with cardboard, scissors, and thin sheets of lead, Ms. Reiniger created some of the most delicate, detailed images in film or shadow theatre. The beauty, the sensibility, the naturalistic movement, are in some respects still unparallelled in animation today. Her images are reminiscent of other artists, such as Kay Nielsen, who teetered in the Chinoiserie space between curvaceous Art Nouveau and more muscular, clean-cut Art Deco; like traditional wayang, she worked with characters carved into mere slivers of shadow. However, unlike traditional wayang, these puppets move all over: their hair, their clothes, their wrists and ankles.

As Art on Paper says:

"The only daughter of a banker and a homemaker, Reiniger set great stock by her birth in the last year of the nineteenth century. Except for the fact that she worked in film, her techniques and sensibilities reflected the earlier century more than her own. She described her childhood as 'extraordinarily' happy, her artistic interests celebrated and encouraged by both her parents. Theater captured her imagination early on, but after her first film, she was hooked; she had in the meantime discovered her 'unsettling gift' for making silhouettes.

Though inspired by shadow theater, Reiniger’s figures appear to have none of the stiffness of their non-film predecessors. 'Film is movement,' she noted, often comparing filmmaking to ballet. 'It’s the combination of curves and diagonals that gives ballet and animation their sweet tenderness and their striking directness.' While using literal light and shadow, Reiniger also relied on the shadings of music: the fine variations in her animations often parallel the tone and stress of musical notes rather than the hiccoughs of flip-book style animating techniques. She rather modestly noted that, "even with primitive materials, one can work small wonders."

The story is based on a melange of stories from the Arabian Nights, fitting several ideas neatly together to fill in spaces in the familiar tale of Aladdin. It's a fairy tale, with all the trimmings, a really good adventure story with visuals that stimulate that wild-longing-part-of-the-brain, the part that says "I wanna go there!" I love it all, except perhaps the parts where the Princess lies back passively, while yet another person abducts her against her will.

My biggest issue with this really beautiful restoration is that Milestone Films, the people who are distributing this work of art, are resolutely issuing cease-and-desist orders for all YouTube and other clips on the Internet. Personally, I think this is a publicity disaster, and I hesitate to recommend you spend money on these people, but the film is really so wonderful that you should at least check it out. I'm going to buy it, PR department or no PR department.

Along the same lines, may I recommend a group called Shadowlight Productions, who have been putting on really wonderful shows around the San Francisco Bay Area (and elsewhere) for years now.

Another example of creative people using the Wayang as a springboard, Shadowlight produces video of their work, which run from bringing to life a jazz-age poem from the 1920's, to telling a funny Native American story about Coyote, to Xanadu, the epic Chinese love story about Kublai Khan.

"ShadowLight Productions, founded by Larry Reed in 1972, has a mission to bring the stories of the world to light. [They] hope to build a world community through crosscultural storytelling and the magic of shadow theater."

They have been known to use huge projection screens as large as 30ft x 15ft, ensuring that their wonderful images come across much larger than life, and immersing the audience in the story in a way that traditional small shadow puppetry might not. Their images, which often use live actors costumed in shadow-making armatures, are startling, while still referring to the tradition of Balinese shadow puppetry. Wonderful stuff. 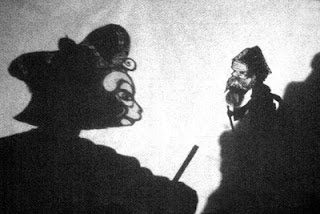 I'm enjoying your site immensely. Always something fascinating! I added this movie to my netflix queue. Thanks for sharing all your amazing finds.

I'm not sure where you would find it, but there is a terrific Australian steampunk silhouette animation called "Jasper Morello and the Lost Airship". Very compelling, very disturbing. I saw it at a film festival. http://www.jaspermorello.com/gazette/

There was a book available in English by Reiniger 30 years ago (it was in my school's library) explaining how to make silhouette puppets, theatres and films and giving a brief history of shadow puppets. It was fascinating - I still remember it very clearly.