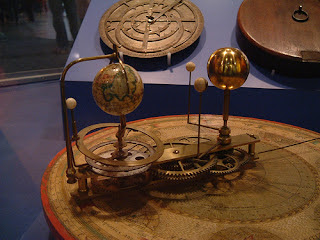 ‘Orrery,’ defined:
“...a mechanical device that illustrates the relative positions and motions of the planets and moons in the solar system in heliocentric model. They are typically driven by a large clockwork mechanism with a globe representing the Sun at the center, and with a planet at the end of each of the arms.”
- Wikipedia

”The moon was silver. The sun was gold, or at least gold-plated. Mercury was a mirrored globe - mirrored with mercury, of course. Saturn was heavy enough to be lead...The orrery, brass-bound and oak-cased, was one of those turn-of-the-century scientific instruments that couldn’t have been more solidly rational, material, engineered: a patented universe, made of rods and balls, meshing gears and electroplated springs.

“Then why couldn’t Smoky understand it?

“...[He] had come to understand the basic principle of clockwork, upon which all those ingenuities were based: that a motive force - a falling weight, a wound spring - was prevented by an escapement from expending all its energy at once, and made to pay it out in ticks and tocks...The difficulty, the maddening difficulty, about Edgewood’s orrery was that Smoky couldn’t discover a motive force that made it go around.”

...And of course, nothing is driving it, it just goes on moving, through some magical force, unwinding with the ticks and tocks of the story.

(I thought I was the only one who knew about this book until I read a mention of it by Neil Gaiman once, which made me feel somewhat redeemed. A lovely book, by the way.) 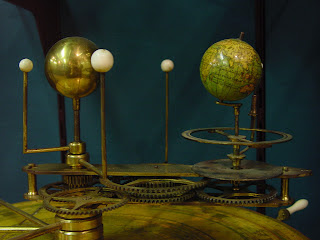 There are still loads of wonderful orreries out there in museums and (probably) very rich people’s homes. The name comes from Charles Boyle, who was the 4th Earl of Orrery, for whom one was made in the early 1700’s. 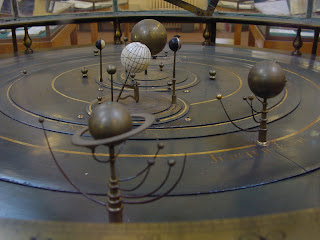 But - check this out - orreries, or something like them, go back to antiquity. A thing called The Antikythera mechanism ”is believed by many to be an ancient mechanical analog computer (as opposed to most computers today which are digital computers) designed to calculate astronomical positions.”
-Wikipedia
Look at this picture, below - is this deserving to be in the Cabinet, or what? 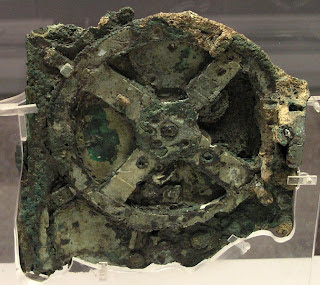 And by the way, I’m in love with Carlo G. Croce, a retired (or nearly) marine engineer who has a website in Italian and English. Mr. Croce is a clockwork-loving person who went to Greenwich...well, let’s hear it in his words:
“During my last holiday in England I paid a visit to the Greenwich Observatory Museum, where I saw a couple of orreries. Having no camera with me, I tried to fix their design in my mind. Back home I realized I could remember very little about their construction. Wishing to built an orrery my first step was to make a drawing.
I found a visit to the local public library very helpful in finding out what really happens above our heads. After many calculations I was able to fix the number of teeth for each wheels of every train.” 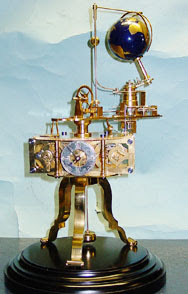 Mr. Croce’s website, The Home of Antique Clocks, is a fine example of someone who loves what they do - he has links to pictures and descriptions of each one of his tools, in case you want to go home and make an orrery yourself. But his love is evident in the quality of his constructions, which are truly beautiful. Take a look at the Orrery page, and his wonderful Astrarium - and my favorite, the “wheels cutters” page, where we get to see things through his eyes for a moment.

These are magical devices, in the extreme. I’ve gone on long enough, but if you want to pursue this on your own, here are a few interesting links:

(Special thanks to the unknown David Wilkinson, of the Fitzwilliam Music Society, Cambridge, for his pics of the Whipple Science Museum, for which I am indebted.
at 3/26/2007

"Little, Big" has been my favorite book for decades, ever since I read it in college. Have you read any of Crowley's other works? The Solitudes series is also grand, although I found the final book a bit anticlimactic. Still worth the time. Thank you for your beautiful blog. It is so elegant and so wonderfully done. Keep it up!

I've read a few of his other books, but not the Solitude series. Thank you for the suggestion! I would like to check it out.