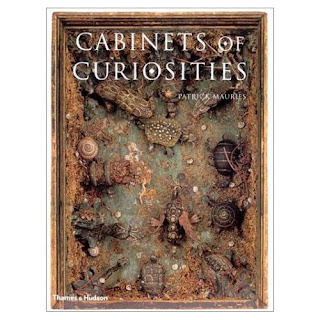 (above: Cabinets of Curiosities, a book with photos by Patrick Maurles)

We’ll start with this.

Early in the Age of Enlightenment, a time of curiosity and ignorance, where the occultism and alchemy of the Rennaissance are melting slowly into the rigid structures of modern science, where reason is overtaking superstition, but the magical thinking bleeds into everything. Magic and science are harder to define, and the world is a chaotic place, which philosophers and scientists strive to categorize. Their categorization wanders into asthetic considerations - after all, we are traveling through the Baroque period - and becomes an art form in itself.
What we have here is a Cabinet of Curiosities, a place where things of interest are set out, in possibly bizarre, possibly fetishistic presentation, for perusal by the discerning, who understand that presentation, and scientific interest, are all a form of magic.

What we have is:

Automata
Automaton (singular) is defined as: "A mechanism having its motive power so concealed that it appears to move spontaneously." The term is generally applied to mechanical human or animal figures which move by clockwork motivation. 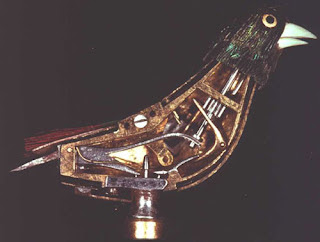 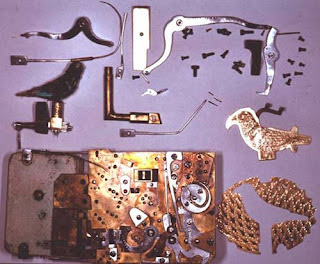 This amazing bird can be found here, where you can hear a recording of its song.

The author of the site, Ray Bates, is an antiquarian horologist in Vermont, and has this description of the bird:
Singing bird box: a small decorative box, often of wood, silver, or, in this case gold, about four inches long and containing a musical mechanism driven by a mainspring which on release of a catch activates multiple cams and levers which accompany the tiny bird which appears from under the lid, producing through a small bellows and variable pitch pipe a remarkably realistic bird song, the bird rotating and flapping its wings, lifting its tail, and turning its head while moving its beak. At the end of the bird song sequence the bird suddenly disappears into the box, the lid closing over it as though it did not exist.

Clocks and Clockwork, in any form, of course.

Wunderkammer
The Cabinet of Curiosities, the Chamber of Curiosities, where Nature was examined in all its minuteness and symmetry. These began at the end of the Renaissance, or the beginning the Age of Reason, which is sometimes thought of as the early part of the Enlightenment:
“Wunderkabinett and Wunderkammer - A Wunderkabinett is most literally a "cabinet of wonders," and a Wunderkammer is a "chamber of wonders," exhibition spaces in which miscellaneous curiosities — odd and wondrous rarities — brought together for private contemplation and pleasure. These words are German, but they are also used by speakers and writers of English because so many of the earliest (16th century) and best examples have been German. The objects on display in these storage/display spaces were marvels of nature.
If some or all of the objects were art, then they were more likely to be called Kunstkabinetts and Kunstkammern instead. These precursors of the museum were developments from the Renaissance. The museum, on the other hand, was a creation of the Enlightenment.
The plural of Wunderkammer is Wunderkammern.”
- From Artlex, the Artist’s dictionary

I always think of Reliquaries as precursors to the Wunderkammer, and because they are so amazing, I may just include them, though they are not really very Reasonable or Enlightened.

Weird Science and Medicine, which relies only partly on scientific ideas; the rest is hocus-pocus of the most marvelous kind.

...The point is the attitude. The objects and ideas from this time depended on a uniquely baroque sense of decoration and presentation, a sense of the strangeness and vastness of the universe (a fascination which diminished as the boundaries of the world became closer and more defined), a time during which the class systems in their most defined and reprehensible forms allowed ever more elaborate and arcane systems of leisure and intellectual advancement.
at 3/21/2007

Thank you for creating Cabinet of Wonders.