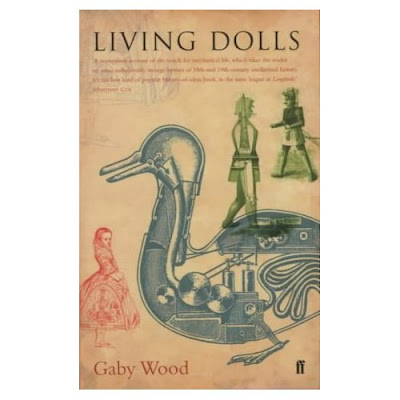 (Editor's note: it has been pointed out to me that the book I reference below has already been mentioned on this blog, years ago, under a different name (Edison's Eve). It seemed familiar, but all the searches I did came up without a cross-reference, so I let it go. However, the articles I list below are so interesting that I've decided to let the post stand.)

On pursuing some other research, I came across a reference to what looks like a wonderful and extraordinary book. Living Dolls: A Magical History of the Quest for Mechanical Life, by Gaby Wood, looks to be a treat. Although the book came out in 2002, the author's fascination with humans looking to make machines like themselves (and ultimately, to lose that line between themselves and their machines) makes for a truly interesting read. The Observer, in an insightful review, describes some of this fascination:

"Never far away from the mechanical joke is the threat of death and horror and Wood does not miss this lesson. Her stories always end in the dark. So she describes an automatic chess player first made in Hungary in 1769, in which a moving statue of a Turk seated behind a board atop an elegant cabinet would play, and almost always beat, the best human masters. The Turk got star billing until well into the nineteenth century, was memorably if unreliably described by Edgar Allen Poe, and ended its life in a fire at Philadelphia's so-called Chinese Museum in 1854.

"Long before then, everyone knew there was a human director concealed within the Turk's cabinet, hidden by a useless but convincing set of gears. Wood carefully documents the Turk's life, but she's much more interested in that of its directors, some more than 6ft tall, trapped for hours within a tiny box. The best of them collapsed into alcoholism. 'Death came to put an end to his painful position', joked a Paris journalist.

"The point of such tales, so Wood convincingly insists, is not so much to illuminate the capacity of machines to behave like humans, but to reflect on how people turn themselves into machines. She recalls that while Edison devoted huge efforts to building speaking dolls, it was the phonograph which he baptised his 'baby'. She describes a film made in 1902 by the French genius Georges Méliès, in which the cinematographer plays his own decapitated head powered by a vast set of bellows."

The Guardian, in their review, actually went so far as to quote an extensive section from the book, about Jacques de Vaucanson, an early automata maker and brilliant man, known for his duck which ate and "digested" its food. The story is long and wonderfully written, and I highly recommend you go read it for yourself, but here is a sample:

"Vaucanson's earliest mechanical influences came from the church. He was the youngest of 10 children (born in Grenoble in 1709), and his Catholic mother would take him with her every time she went to confession. While his mother was with the priest, Jacques stared at the clock in the adjoining room. Soon he had carefully calculated and memorised its mechanism, and was able to build a perfect copy of it at home.

"His father, a master glovemaker, died when Jacques was seven, and the boy was sent away to be schooled at a monastery, where he arrived clutching a metal box. He didn't get on with the other boys, and couldn't concentrate on his lessons. Eventually, the father superior was forced to open the box. He found wheels and cogs and tools, next to the unfinished hull of a model boat. When confronted, Vaucanson refused to do any studying until he could make his boat cross the school pond. He was locked in a room for two days as punishment, but he spent the time making drawings so exceptional that the maths teacher, who was later to be lauded by the Royal Academy of Sciences, decided to help him.

"Of course, a story exists about the youthful genius of all famous men. What is curious here is that all of Vaucanson's early efforts as a mechanician were connected in some way to religion. The clock was seen at confession; the maths teacher was a monk. He went on to be taught by Jesuits, and, on leaving school, became a novice in the religious order of the Minimes in Lyon. This was the only way, he thought, that he would be able to pursue his scientific study, given the limited finances of his widowed mother. Indeed, Vaucanson was given his own workshop in Lyon, and a grant from a nobleman to construct a set of machines; but his talents were only encouraged up to a certain point. In 1727, to celebrate the visit of one of the heads of the Minimes, he decided to make some androids, which would serve dinner and clear the tables. The visitor appeared to be pleased with the automata, but declared afterwards that he thought Vaucanson's tendencies "profane", and ordered that his workshop be destroyed."

The article goes on to describe how Vaucanson escaped the monastic life and went to Paris to seek his fortune, find a patron, and do the work that he cared about most, including the incredible flute-player Vaucanson thought up literally in his sleep, a nearly impossible proposition for the day, but he pulled it off in the most extraordinary way. Aside from the man's brilliance just watching the things he made travel through history is an amazing story, and like most stories of lost things, fairly sad, with a few interesting notes about the beginnings of the French Revolution. 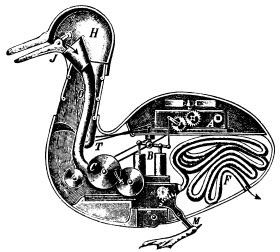 Within the quoted section in the Guardian we watch Vaucanson's inventions move through history, lost and found several times, becoming increasingly defunct, while later tinkerers are unable to get them to work properly. Interestingly, the author of the Observer article mentions meeting a contemporary who was working to recreate the digesting duck --

"A couple of years ago I met a brilliant English artisan who'd been hired to make a modern replica of Vaucanson's duck - most of our chat focused on just how this trick defecation worked. But spread out on his table were lumps of dead duck, bits of wing, tendons and feet."

-- And now you can see a reproducktion (sic, sorry) on YouTube doing its thing. It used to have its own video, but it's been taken down - all I can find now is this very nice man apparently telling French schoolchildren about Vaucanson's brilliance.

Lastly, in a wonderfully reflexive postmodern touch, someone has created an automaton of Vaucanson himself, making his duck.


Well, as they say, the more things change, the more they stay the same. The obsession with mechanical life goes on.

I think this is the same book formerly published under the title "Edison's Eve: A Magical History of the Quest for Mechanical Life". I've read that, and while parts of it were interesting, other parts were very dry, and there were a couple of sections (the one on the 'doll family' for example) that really had no relation to the rest of the book, and seemed to be put there merely to make the book longer.

A fabulous post as ever Heather :) Am always keen to read automata-things :)
Shall have to get a copy of that book.. looks splendid!

Aha... now I feel silly. I recognized Gaby Wood's name, and should have looked further. Clearly there is a British/American division here, and I didn't catch it, because I never bought this particular version of the book and read it. My apologies to all!

However, the story quoted in the Guardian is still worth reading, so I will let the post stand.

the "very nice man" is in the automata museum in Grenoble, 800m from where I live :)

Ha! Well, that figures, doesn't it?