Adele Blanc-Sec Comes to the Screen! 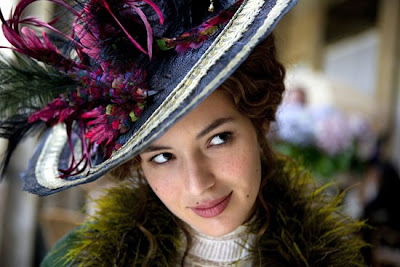 Okay, you-all probably already heard about this, given that the movie has already been released all over Europe, but I only found out about it this morning. After all, I've been busy building a house. Nevertheless... peel me off the ceiling!

I am absolutely over the moon. Thank you, Luc Besson!!! I have been a fan of Adele Blanc-Sec for nearly 30 years, if you can believe it: I found one of the comics in a store the very first time I went to France. It was a comic book - but it had naked breasts! And a strong woman protagonist who smoked and pulled guns on people! And it took place in the early 1900's, with all the wonderful fin de siecle architecture and early-century atmosphere! I'd never seen anything like it - the whole thing just blew my young mind. And I learned a lot of French trying to figure out what was going on. 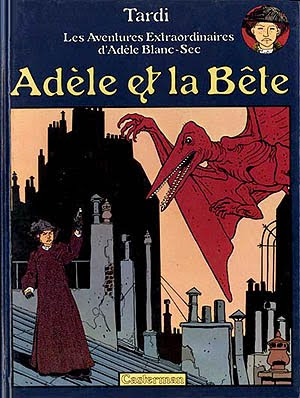 This series of books, originally written by Jacques Tardi in 1972, is a hu-u-uge reason why I love Steampunk today. It made the most incredible impression on my young mind, and I spent many years hunting down first French, then English versions of the books. They have been hard to find, and I loved them a lot - and by extension, I learned to love Tardi. And now, thanks to the movie, Fantagraphics says they will be bringing out new English translations this fall. This sounds exciting, but it's only Volume 1 - the others will follow later (I hope).

This is a very long time coming, but I am redeemed! Bwahahaha!

Unfortunately, according to IMDb, the film seems to have no release dates in any English-speaking countries. It's not clear why this is, but I encourage all to write to the distribution company and demand to know when they will bring this awesome-looking film to the English-speaking world. In the UK, that would be Optimum Releasing, but I haven't found anything for North America yet. It seems like the delay in announcing it is pretty long. I just hope they're not bickering about the bath scene or something (argh).

Thanks to the Steampunk Home for finding this!

Slashfilm has some photos here...

And here are also Two reviews one of which doesn't like it so much and the other which does. I don't care - I see scenes, even in the trailer, that I remember from the book, and it makes me childishly happy, regardless!
at 7/14/2010

Strange, I'd never thought of Tardi as steampunk. But indeed the Adèle Blanc-Sec series could be put in that category. I love his drawing.

I saw this movie in France. Could have been better, but still enjoyable. The movie cover 4 books, and Besson is thinking about a sequel if the first one doesn't fail at the box office ...

The wooden figure at 0:07 is actually the fetish from the Tintin adventure "The Broken Ear".

Oooh, cool! You could be right. I'll have to go rummage on the bookshelf and pull that one out. If I recall correctly, that's in one of the books, too - so perhaps Tardi was making an in joke himself.. I only have two of them but I'm in the process of rereading them.