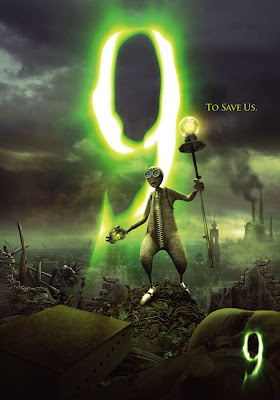 So I was contacted recently by the people at Focus Films, who are whipping up a buzz about the forthcoming film called 9, a post-apocalyptic animation piece about some little stitched-together folk who must survive in a harsh environment full of really strange and feral machines who hunt them. It sounded familiar, so I did some research and found the original short film by Shane Acker, which won a number of awards (and was nominated for an Oscar) - for good reason. Below is the full film, courtesy of Youtube. It runs about 10 minutes long, and is really excellent.

Apparently Mr. Acker is directing this new, longer, and more complete film, which is produced by Tim Burton and Timur Bekmambetov. The website given to me by the Focus people, full of backstory and cool imagery, was very interesting, much more encouraging and intriguing than the trailer I originally unearthed, which looked and sounded, as my ten-year-old daughter said, "Like it was made by gamers."

I often wonder how authors feel when their efforts are, by editorial command, given garish book-covers and inaccurate blurbs, as has happened to many fine writers like Philip K. Dick, supposedly to appeal to the genre reader. In previews, when choices are made about music and editing that feel like they are aimed at a specific kind of audience (not who the art and direction of the film seem to be targeting), it does make you wonder how the filmmaker feels about it, and if they get some say in the publicity. 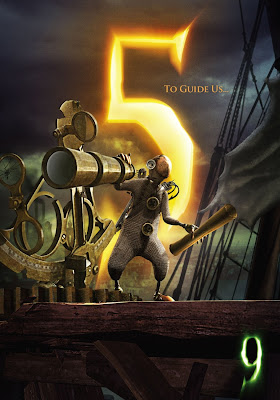 In fact, it does look like it has the makings of a complex and even clever film, with a slightly grimy aesthetic that includes cobwebs, parchment, brass navigational instruments, books, dead machines and things in jars, to name a few, and an interesting glowing quality of light which perhaps is part of this particular vision of a doomed world. The vision is pretty interesting, a bit like Mad Max meets da Vinci meets the Muppets, with a steampunk twist. 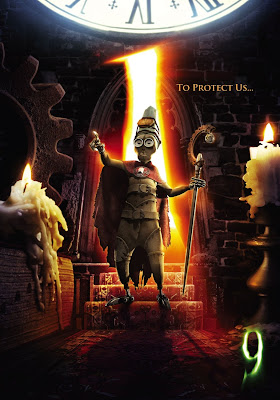 I admit, though, I'm still trying to figure it out. The marketing is strangely mixed, and seems to be trying to appeal to the steampunk contingent while keeping an eye on metal-loving gamers. Perhaps the director has some kind of hybrid vision? For some reason, the fact that only one out of nine main characters is female makes me think this might be true. It's really an enigma, one I'm not entirely certain will work. The victoriana of steampunk and the geeky back-to-basics wonder of clockpunk communities tend to be very female-friendly, with a strongly feminine streak mixed into the rivets and brass. So, unless the art direction is only giving a sort of nod in that direction, I am curious to see how they will pull it off.

On the other hand, perhaps the marketing assumption is that gamers watch previews, and other types look at websites...? Or perhaps, that women look at the web, and men look at previews? 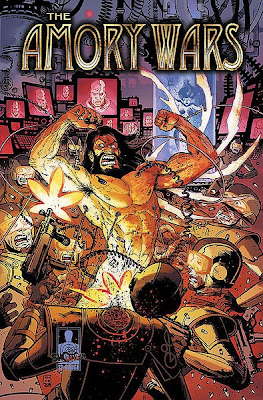 Still, (and I am getting on my soapbox here) it strikes me as strange: I've seen three trailers now and they all use the same song, a generic semi-metal instrumental by Coheed and Cambria. What's with this sole choice of music to represent their movie? My beef with it is not so much a matter of my personal taste so as the genericness of the choice. If they are wanting to make the film look intriguing, why are they going so mainstream (and such a specific kind of mainstream, at that)? It's true that Mr. Bekmambetov has made movies of comics, and the lead singer of Coheed and Cambria wrote the Amory Wars series, above, but still. Does that style (see picture) really reflect the kind of movie they're making here? I mean, I actually had goosebumps watching the most recent preview - until the music started. If it's supposed to be a creative film, why not use more creative music, like Abney Park, or the awesomely versatile talents of In The Nursery, who did, among other (and totally disparate) things, the modern soundtracks for such silent classics as The Cabinet of Dr. Caligari and the wonderful Hindle Wakes? I mean, we might get tired of Danny Elfman sometimes, but even he could do better than this; his music would at least be tailored to the film (he did do a passable semi-metal thing himself for Mr. Bekmambetov's own movie Wanted). Or try looking at some of the other possibilities, like these and these. {/soapbox} 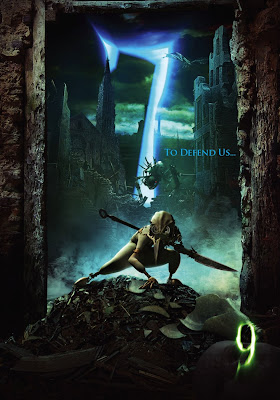 In any case, the people at Focus have vowed to send me cool stuff, and I will duly filter it and pass on anything that seems truly unusual. It's not my style to hype about media, but I do have to say some of the initial images and stories in the website above seem potentially quite in line with the Cabinet, so I am ever-hopeful. Keep your fingers crossed.

(Update: I seem to have gotten on some kind of list. I've now gotten another email from another cinema company asking if I would participate in the discussion of some other upcoming films. Sorry, guys, that's just not my cup of tea. Live and learn!)
at 7/05/2009

Of course trailers always use loud and wildly inapropriate music, but I have to say that in this case it does work particularly off putting.
As for the film itself, I'm not sure what to think of it yet.
Your daughter's assesment is rather accurate.
I think what bothers me about it is that it seems like the film has been made in the wrong medium.
The design looks like they raided the Brothers Quay's dustbins for inspiration, the way the imagery revels in old broken dolls and puppets mixed with a heavy dose of clockworkpunk. But instead of building real things and animating those, we get computer generated animation with synthetic textures.
To me that seems somewhat wrong. There's nothing inherently wrong with computer animation, but in this case I think it's the wrong medium. nd Instead of real dirt and real brass goggles you're looking at simulations of them. And when the film seems to be about their actual creation and patching up, and so on, I feel disconnected when everything has that glossy cgi look.

At any rate I hope the film has an interesting story and that it's more than just some setpieces with crunching metal beasties.

Thank you for that, Anonymous. Deborah Lurie looks like the person responsible for the score, with bits by Danny Elfman. Why, oh why isn't there a trailer with some of her music? Granted, I don't know what it sounds like...

I saw the preview a while back and was certainly intrigued [I am female]. The questions you bring up about the film and marketing are interesting, though. It does get kind of ridiculous that marketing directors seem unable to comprehend that women might actually be into animation, sci-fi, fantasy, etc. I am excited to see it and judge for myself...I'm also curious about what you think, too!
Cheers,
Tara

Well, months later and having seen the film, I have to say it was very pretty to look at, but the story didn't really grab me. And the ending was lame, lame, lame halt and lame.

The inconsistencies of presentation really bothered me, too. We have rust but no decay of paper. Really?

Left me wanting something else as a chaser.