Little Vampire (and Other Little Folk) 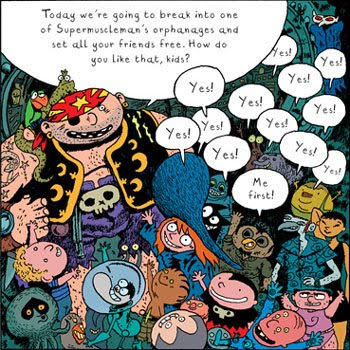 I first became aware of his work through, bizarrely, a little annual comic (a compilation of stuff put together for kids to read, in a cheap format similar to a TV guide) which my kids bought at a vide grenier (a village-wide garage sale) in France. Mostly it was full of fluffy kids' comics, but there was this one story which caught our attention, in which evil mermaids who make horrible honking and tooting noises (expressed in French as "Onk! Onk!" and "Tut! Tut!") capture a girl and boy. The kids fight the mermaids with a found sword, and then... well, the next frame is of them sitting around a table with a couple of huge fish skeletons on plates, looking very full. The annoying mermaids (sans tails) are left on an island, still alive and honking, to enrage a skinny guy and a superhero-type guy, while the two kids and their pirate friend fly off in a spaceship.

Now, first of all, the concept of cutting off (and eating) mermaid tails is wildly arresting. I was initially rather shocked, and then thought, "Wow, the French sure are open-minded!" But the whole thing - drawings and all - was weird: who was the guy in the superhero suit, and the skinny guy with the tall head and beak-like lips? And why are these kids flying around in a spaceship with a pirate guy? My French simply wasn't good enough to get my head round it.

But I also couldn't forget it.

Then one day I was in my local comic book store and there it was: a little comic called Sardine in Outer Space, by Emmanuel Guibert and Joanne Sfar. I couldn't believe my eyes: a whole book of that gross humor, drawn in hilarious style? I had to get it, and then I got the skinny: Sardine, a girl (or little witch?) whose black cat rides around on her hat, and her friend Little Louie, travel around space with Sardine's uncle, Captain Yellowshoulder (known as such, apparently, because of his ubiquitous shoulder-riding parrot), committing deeds of derring-do (and sometimes deeds of pure annoyingness) against the stupid President of the Universe, Supermuscleman (known by the same name in French) and his evil genius advisor/superior Doc Krok. The stories are unique, individually and as a collection. My daughters love them, particularly the younger, who likes funny stories with occasional gross jokes about badly-behaved people - and particularly if they are drawn as wildly as these.

Sfar has gained some fame in the U.S. with The Rabbi's Cat, which won an Eisner Award and has gotten excellent reviews. He also did the Donjon (Dungeon) series with Louis Trondheim, another of my favorite (very irreverent) comic people. Sfar's Klezmer: Tales of the Wild East sounds pretty fun, and The Professor's Daughter seems intriguing. I have to admit, though: I haven't personally read any of his adult stuff yet. 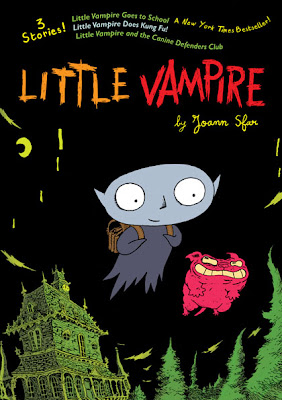 I did just get Little Vampire, which includes three stories about a, well, little vampire, the son of the man from the Flying Dutchman and his suicide bride. He lives in a haunted house with his horrific-looking but kindly father and his beautiful, but blue, mother, with a small red demon-like dog and a host of yucky monsters. When he makes friends with a human boy, these create some minor obstacles, being initially daunting for the boy; but the boy soon gets used to it. The stories are, in true Sfar style, truly unusual, though they have more structure and a little more empathy than the unapologetically bad-mannered Sardine books.

I really, really like them. Sfar has an unerring eye for what it's like to be a kid, and a certainty about a child's understanding of its place in the world: he understands the simple irritants of kids trying to deal with stupid adults, and finding ways to mess with their boring desire to control things; at the same time he knows that adults are not always bad, and that being a kid can be difficult and confusing. If his adult stuff is this spot on, I'm in.
at 7/01/2009

Sfar is a Genius, and so productive ! He's done more comics these last 15 years than most cartoonists in their whole life.

My favorites are "The Rabbi's Cat", and "Vampire Love" (sort of the same characters as in "Little Vampire", but grown up, and dealing with love, sex, and relationships)

I don't know how much of his other stuff has been translated...

The professor's daughter is good in a silly way.

Little Vampire is fantastic. I learned of it through the animation series they made of it. They perfectly adapted Sfar's drawing style for it.
All in all his stuf is wonderfully anarchic.
Klezmer is good too!