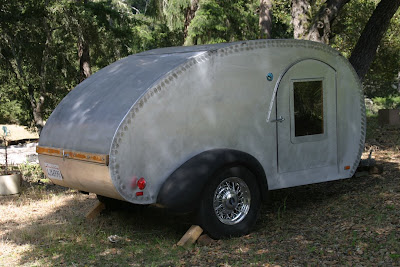 Life the past month has been unending chaos, so my apologies for the silence. Summer vacation starts NOW, this MINUTE - so I will work to remedy things, as soon as my head reinflates. Expect something in the next week or so, as I've had numerous posts churning around in my head for ages now!

On a (hopefully not too) prosaic note, LOOKIT my NEW TRAILER!! This is my investment in cheap travel, for the economic travails ahead. I have long loved teardrop trailers, as they are called, and this is a nice one, made by a man who creates hot rods in the Central Valley of California.

The typical teardrop is basic, just a bed and a little galley (kitchen) area, and this one is no exception, except for the extra-wideness of it and the spoke tires, apparently a sign of hot-rodness incarnate (and to be honest, not a selling point for me, though I get many admiring remarks - about the trailer - from certain kinds of men at gas stations, probably for that reason particularly). 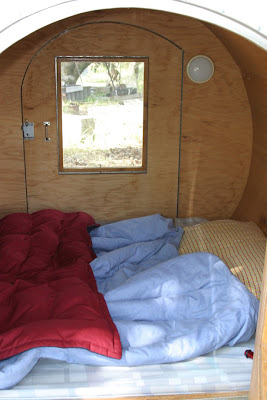 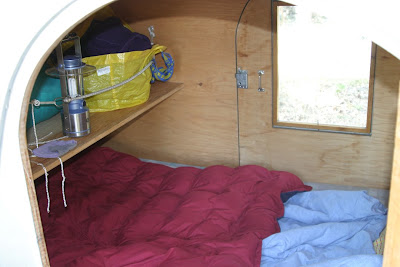 The teardrop trailer was a phenomenon popular from the 1930s through the 1950s, an era (interrupted by a war) where the streamlining of lifestyle was a popular pursuit; the Ayn Rand vision of individual freedom and the pursuit of aesthetic practicality were in full swing, and Gernsbackian visions of shiny, teardrop-shaped futuristic vehicles were sending ripple effects throughout American culture.

My own reason for liking these trailers is more practical. Cuteness and coolness aside, I like the fact that they are still about "real" camping (well, car camping anyway) - in other words, about being outside. You live outside, you cook outside, you only go into it to sleep (which feels a bit like being in a tiny, round cabin. And we all know I love tiny spaces). But mostly, it's a practical place for your stuff to live, so you don't have to spend a lot of time packing and unpacking, setting up and taking down. I am rubbing my hands at the mere thought. 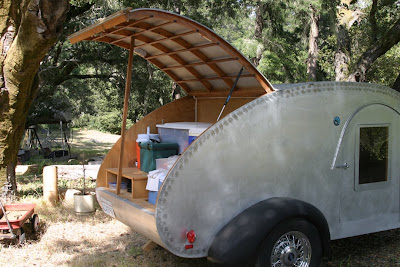 Full of plastic bins: not the cool way to go.

Now that I have a bit of time, I want to put a little work into the galley, making shelves and little spaces for storing things so they don't rattle around on the journey, and every object, like in a ship's galley, has its place. Bwahaha. It will be like a Camping Wunderkammer. I might even try a mod or two, think of ways to get it really weird and fun. Any suggestions?

Cheers for your teardrop! I'd love to know the cost.

You can find them on Craigslist or any related listing site, or sometimes they're listed on teardrop trailer forums (or other trailer forums). Not sure where one would find them in the UK, but I know they're popular everywhere right now.

Think there was a Mickey Mouse cartoon, probably from the 1930s, which was called "Mickey's Trailer". If I'm remembering correctly it features a teardrop trailer.

Wow, I love nooks and crannies kinds of spaces and that looks like so much fun...

The trailer is incredible!! So cute, so 50's Americana! What wonderful adventures you are going to have...
Cheers,
Tara

Dang. Now I want one. :) I think you are going to have a fabulous time in your little teardrop. Sigh.

This is the coolest. I want one, too.

These are so cool. I'd love to take one of these around the country when my little one is a bit older. I wonder if they make ones with a little baby cradle inside.

ooh! welcome to the family! i built mine 5 years ago, and having one is sort of like having a puppy...you can't go anywhere with it without everybody wanting to stop and talk about it (or look in it, or crawl in it). there's a message board here: http://www.mikenchell.com/forums/
the folks there are great, share ideas all the time, they even walked me through my build. also, they have listings of teardrop rallies sorted by region, if you wanted to see other trailers and design solutions in person.

see you on the road!