Ze Widow, She Is Black 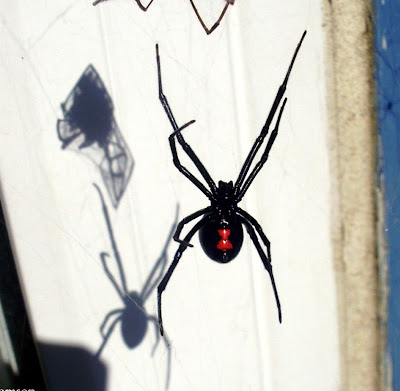 One of the not-so-great joys of my new trailer is that it came with an infestation of black widow spiders. We would open the galley, and there one would be: black, and shiny, with horribly pointy legs and a big, fat abdomen. And a few days ago, for the first time, I saw the Hourglass. Red and very clear, it shone on her chitinous tummy. She quivered in her web, horrified that we had opened the lid on her lovely darkness. 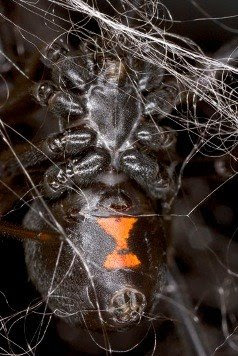 Latrodectus hesperus, the Western black widow, is, like all widow spiders of the Latrodectus genus, very shy. If you intrude on her life she will flee first and ask questions later. Though her bite is incredibly venomous, she prefers not to bite unless grabbed, pinched or squeezed. I have seen black widows (in my precious trailer, no less) with abdomens more than a quarter inch across, and leg-spans close to one and a half inches (the males look very different, smaller and differently-colored and -patterned, so when I say "she" I know for sure that it's the female I'm talking about). 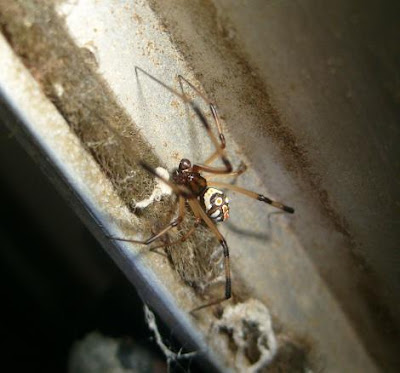 The male black widow isn't even black, most of the time

Unlike brown recluse spiders, whose venom is cytotoxic, meaning it is meant to slow down the prey, partially digesting the tissues and making for failure of the prey's systems, the black widow spider's venom is based on a neurotoxin, which I would much prefer. In mammals, when they are bitten by a spider with cytotoxic venom, it means the tissue surrounding the bite turns necrotic (dies) and is often unable to heal afterwards. There are some truly horrific pictures on the Internet of brown recluse spider bites several months on, which I would rather not contemplate.

"Spider venom falls into two categories: neurotoxic and cytotoxic. Neurotoxic venoms interfere with the transmission of nerve impulses to the muscles, frequently causing spasm and paralysis. Neurotoxins act rapidly, important to spiders confronted with large or dangerous prey intent on escape or retaliation. Cytotoxins, on the other hand, act more slowly. They principally act to slow down the prey, and actually begin the process of digestion by liquefying the tissues of the prey. Such venom can cause tissue necrosis in mammals, wherein the flesh surrounding an injection site dies, and heals very slowly or not at all."

The venom of a black widow, being a neurotoxin, has a more widespread effect, entering the bloodstream and being deposited at the nerve endings where the endings insert into the muscles. This causes intense, painful cramping and muscle spasms, and is very painful. It lasts a few days and then disperses, leaving only a few minor symptoms - spasms, tingling, nervousness and weakness - to remember her by. For me - though I would not want to encounter a black widow bite - the biggest fear has been for my children, because the smaller the body mass, the more likely the venom is to cause shock to the system and death. 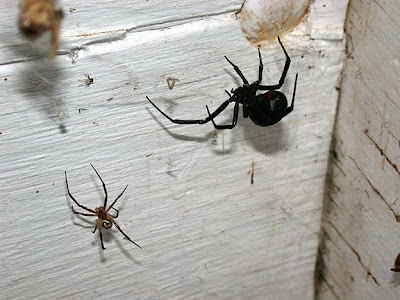 Ultimately, though, I think black widows have gotten a bad rap. They really, really do not want to bite you. And only one kind of widow has been sighted as actually devouring the male of its own species after sex, in the wild. And although they are not artistic - building sticky, tangled and irregular webs from which they hang upside down to catch their prey - their silk is, like many spiders, stronger than its own weight in steel. If you built a bridge of spider silk, I remember hearing, it could be a hundred times thinner than the steel cables used in modern suspension bridges, and still just as strong. Less brittle, too. In fact, the strands are so fine and strong that for many years they were used in the crosshairs in the reticles for rifles and navigational instruments.

The chitin of the black widow, her exoskeleton, is so shiny and tough that simply spraying her living quarters with Raid will not kill her; you must spray it directly on her body for the insecticide to take effect. Even then, you have to use some pretty strong stuff for it to work. And it means you can't kill her without a little personal, face to face combat. Some people say that any strong essential oil will drive the spider away, as they prefer unlively quarters with little or no smell. Personally, I'm a big believer in a tightly-constructed house and a live and let live mentality; usually, I catch them in a glass (or get someone braver than me to do so) and release them far from where my children are likely to be. Sometimes, when I'm enraged (usually because I've been taken by surprise), I squash one - and then immediately regret it, because it always feels like I am killing someone, not something, when I kill a spider - they are so very much smarter than flies and their ilk. Plus, those widows are big, and it just isn't pleasant. 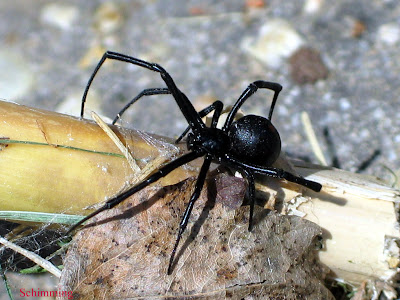 I remember once, in a shop in southern San Francisco where I went to buy a lizard when I was younger and had more time to be interested in the impression I made on others, I saw a large tank full of black widow babies. The shop was either displaying them (presumably under the same youthful impulse to be cool that made me buy a tegu, one of the world's most hostile lizards - sorry, another story) or they were selling them. I remember being in awe that the store owners, or the future pet owners, could be that hardcore. Despite the heavily-tattooed and pierced person behind the counter (very much less prevalent then than now), and the array of odd pets on display, I hadn't considered that anyone would be into selling poisonous spiders. Now, when I look back, I can't help seeing it as a little irresponsible, spreading poisonous beings who are pretty good escape artists via people who probably have no idea how venomous their new pets really are.

In any case, we tend to live side by side, the spiders and I, and I try to keep to the busy light and let them live in their quiet darkness. And if I or my children enter or move those dark places, we check carefully to see who we're disturbing before we go there. We demand the same awareness of the denizens of the dark, and if they cross that line, we do not forgive them. But all in all, we leave each other alone, living our lives and raising our children as if the other side did not exist.

Stringybark graphics has a fabulous redback spider pattern which they will put on t-shirts, linen dress shirts or any clothes they produce (click on the "prices" link). Guaranteed to stop conversations when you walk in. My friend Gwyan has had one for years and loves it.

A gruesome article, in the vein of the tegu store people, from the oh-so-reliable Sun tabloid where, of all the poisonous species in a man's home, the Widow takes the rap.

The Black Widow Hearse Club is a group of people who love funeral coaches.

Arachnids poster from the Big Zoo

Leave them to "lovely darkness"! Give me Charlotte any time. Informative post.

I am still terrified.

Thanks for the link to my website JamiesAnimalJewelry.com with the Silver Spiderweb Ear Cuff. Lots of other spider jewelry there as well.

Wonderful post! I share your affinity for spiders, however horrific and alien our primate brains instinctively find them.

However I fear that you are giving the brown recluse a bad reputation - or, rather, perpetuating the bad reputation that urban mythology has already given it. Most of those bites you see on the interwebs (and indeed, most wounds attributed to the poor brown recluse) are likely the result of some other nasty, not spider-related at all.

Check out the Snopes article:
http://www.snopes.com/photos/bugs/brownrecluse.asp

And my personal favorite, from U of California Riverside:
http://spiders.ucr.edu/

I found one in my shed here in New Orleans when I was clearing webs. I originally thought I killed her, put her in a jar look at later (so pretty!) and she started moving around after awhile. I apparently got her mid-molt, and the stress killed her, but the zoo guy was happy to have a specimen. (I secretly think he wanted it alive to keep as a pet. Hehe.)

But they do have a bad rep! Brown recluses are very scary, and so are the giant hobo spiders we used to have in our apartment. Never had a spider chase after me before. Creepy. And they do more damage.

I took my daughter on a black widow hunt near Branson, MO. We found them, and me, all 6'7" of me, shook in awe, with a rock between us and them.

A few years back at the "giant insect contest" which is held every year at the Fiddlers event in Winthrop WA. Kids bring or find insects and then they are judged based on a relatively arbitrary set of rules which includes size but also scariness and cuteness/age of the kid.

This one kid, about 6 years old, had a very large black widow in a glass jar. He was there without his parents or any adults in sight, and I asked him how he caught it. He showed me how how he just sort of nudged her into the jar with the lid.

For some strange reason the judges decided to measure this particular insect through the glass.

Great photos. Turns out I just killed one nesting in the outside bottom of a trash can. I wasn't sure what it was. I had never seen a black widow alive before and had not realized how large and distinctly recognizable it is.

I'm not so interested as you are in saving spider lives, but as long as they are not inside, or messing with my stuff, I generally just brush them off. Good thing I decided to kill this one, as someone touching the trash can might have gotten a very unwelcome bite.

Hope you do remember to tell us the story of the Tegu.

Hmm, thanks for the reminder.

i've made a pact with those darling black widows, especially because of my little ones. here in arizona they are part of the landscape. like cacti.

i'm glad you've found a way to live side by side as well.

I still don't like finding them in the house... I think I'm up to seven, now! Anxious that the cat will play with them...