Gorey Ways to Be Deflowered 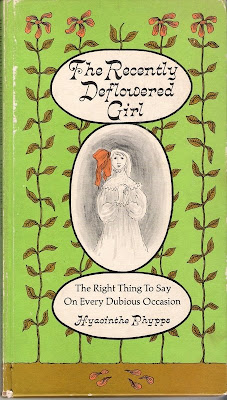 A friend of mine came across this while looking up information about the late, great Edward Gorey. Apparently an early effort, and very silly, but it's fun to know that achieving greatness does not mean an author is immune to silliness. It makes one feel better, rather. It is extraordinary how many possible deflowering situations there are, including By Marimba Player, At Seance, On Cross-Country Bus, In Moroccan Palace, and many, many more. 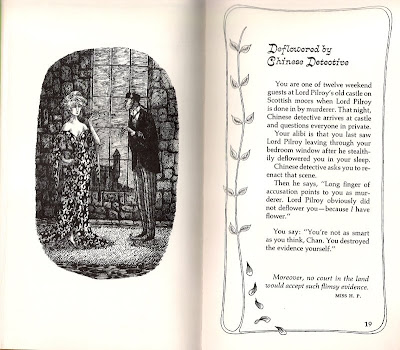 I first learned about Mr. Gorey's works at age 12 or so when a very erudite student of my father's gave me a copy of Amphigorey. I spent a lot of time trying to puzzle out what was really going on in The Curious Sofa: A Pornographic Work by Ogdred Weary, which really only hints at being pornographic - and does contain such phrases as "well-endowed", which I didn't understand until much, much later.

My greatest regret nowadays is that I did not see the production of Edward Gorey's Dracula, with mind-boggling sets by same, in Massachussetts where I happened to be staying the summer I was sixteen. The starring role was played by Frank Langella, who did a remarkably intense Count in a heartthrob movie version of Dracula: a love story, which of course enthralled me as an adolescent. Nowadays, of course, Mr. Langella is still a very compelling and professional actor, though not quite such a sex symbol. 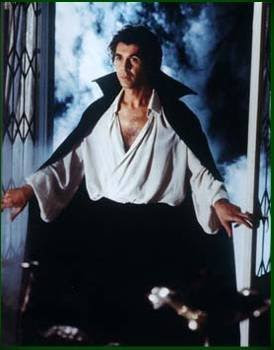 For the record, one of my favorite Gorey pieces at the moment (they change all the time) is The Unstrung Harp; or, Mr. Earbrass Writes a Novel, in which the unfortunate Mr. Earbrass once again goes through the horrific process of creating literature.

"Mr Earbrass has been rashly skimming through the early chapters, which he has not looked at for months, and now sees TUH [The Unstrung Harp] for what it is. Dreadful, dreadful, DREADFUL. He must be mad to go on enduring the unexquisite agony of writing when it all turns out drivel. Mad. Why didn’t he become a spy? How does one become one? He will burn the MS. Why is there no fire? Why aren’t there the makings of one? How did he get in the unused room on the third floor?"

You can find it (expensively) in its own volume, ca. 1953; or you can find it just as pleasant to read in the first volume of the Amphigorey series of his collected works. All hail Mr. Gorey! 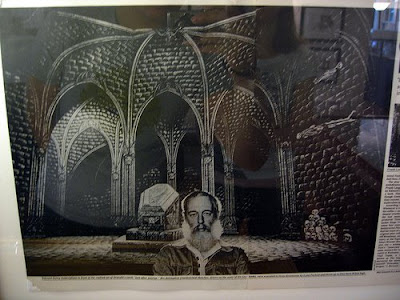 - When I googled Mr. Earbrass, I did come across this search result, which struck me as extremely funny:
Mac Forums - View Profile: Mr.Earbrass
Mr.Earbrass has no contact information. Additional Information, Group Memberships. Song Recs: 0. Mr.Earbrass is not a member of any public groups ... 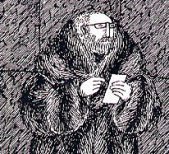 - Lastly, and apropo of nothing: today is the birthday of Honore Balzac. I heard on the radio he used to have a light supper and go to bed at 5 or 6 pm, then wake up at midnight and write for fifteen hours straight, subsisting on cup after cup of strong coffee. (Well, now you know, why aren't you more productive already??)
at 5/20/2009

These aren't first editions, or anything, but alibris has "The Unstrung Harp" in its own volume, for cheap. If you wanted that.

Ogdred Weary is an anagram of Edward Gorey, BTW. I have Amphigorey too, love it.

I saw the production of Dracula you mention--but when I saw the show, Raul Julia had taken over the role of Dracula. The sets were certainly amazing and memorable.

You might be interested that Gorey's last big project was a handpuppet opera, The White Canoe, with a score composed by a certain exhiled Californian...

I have met a woman, now in her late 80s living South of Seattle, who was in elementary school with Gorey. We hear from her a few times a year. She sat in front of him and he would dip her pigtails into the inkwell. She said that he was very strange :)

A great article indeed and a very detailed, realistic and superb analysis, of these books, very nice write up, Thanks.