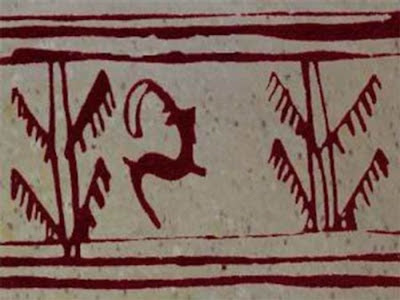 One of my things is that I'm not very conscious of what's going on in the here and now on the Internet. So I often miss trendsetting moments; I'm too involved with things that I find interesting, and those things filter through. And then the rest all go by the wayside. Call me a nerd, if you like, or whatever. My friend Robyn says I know everything. But I often miss things that are considered "hot".

So anyway: correct me if you've seen this before, but in 2005 archeologists in Persia found a cup from the 2nd or 3rd century BC with what looks like the oldest animation ever seen painted on it. I don't know if the cup was supposed to be turned really fast or what, but it's only 8 cm across, so it seems unlikely. Still, in keeping with the recent "ancient technology" theme, I thought I'd mention it.

You can actually download the Quicktime video of the animation the archeologists found by going to this article. The archeologists are saying it's unusual because of the complexity of the movements shown; perhaps we have a prehistoric Muybridge here?
at 8/13/2007

It would be fairly straightforward, I'd have thought, to make a zoetrope out of a potter's wheel - maybe that's how it was intended to be viewed.