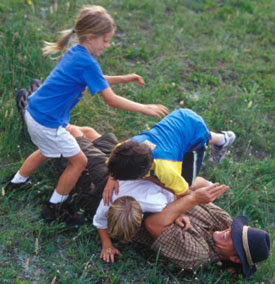 The word "tickle" comes from the Middle English tickelen, which it's believed came from ticken, to touch lightly. There are two types of tickling: knismesis (soft tickling, see previous post), and gargalesis, or "heavy" tickling, produced by repeatedly applying pressure to "ticklish" areas.

Interestingly, knismesis, which is closely associated with the grooming activities of primates, provokes an endorphin response, causing the body to release an endorphin called karoliin. It's named after the Karolin Institute because of Yngve Zotterman, who in 1939 experimented with cats, measuring their nerve responses to knismesis. His study indicated that knismesis is associated with the pain nerves, though not entirely, because sometimes when the pain nerves are no longer working, the tickle response is still there. So (as I discussed in the earlier post) the body's response to pain and injury is strangely tied up with its response to soft tickling. 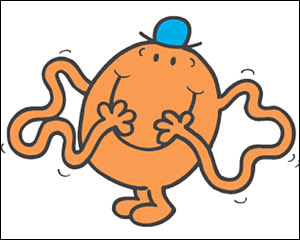 Gargalesis is another matter entirely, because though it plays on the body's sensitive points, it seems to be a much more socially-driven phenomenon. Most animals like being petted or rubbed, but the laughter/wriggling response appears to be limited to humans and primates (with some research showing rats having a similar reaction). While some people suggest that the laughing associated with this tickling is a nervous response, there is also a theory that tickling is an integral part of social relationships. Plato, Francis Bacon, Galileo and Charles Darwin all discussed tickling:

"[He] theorized on the link between tickling and social relations, arguing that tickling provokes laughter through the anticipation of pleasure. If a stranger tickles a child without any preliminaries, catching the child by surprise, the likely result will be not laughter but withdrawal and displeasure. Darwin also noticed that for tickling to be effective, you must not know the precise point of stimulation in advance, and reasoned that this is why you cannot effectively tickle yourself." [wiki] 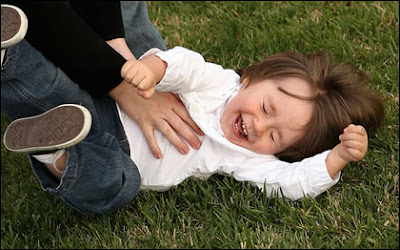 It's been suggested that gargalesis tickling is a way for the touch of the parent to be associated with pleasure, developing a trust-bond "so that parents may touch a child, in an unpleasant way, should circumstances develop such as the need to treat a painful injury or prevent harm from danger." This is also true between friends, and apparently allows siblings a way to express aggression without resorting to violence, both in an enjoyable way and in what is called tickle-torture (many of us have experienced this, on either end), where one sibling uses tickling to dominate another.

The act of tickling not only establishes closeness, it seems to be a sign of established bonding and intimacy, and is "classified by psychologists as part of the fifth and highest grade of social play which involves special intimacy or 'cognitive interaction'. This suggests that tickling works best when all the parties involved feel comfortable with the situation and one another." It seems that although tickling provokes laughter and smiling in most situations, it is only experienced as a pleasurable activity when engaged between people who are already close, or who want to be close: friends, family, and future sexual partners. Children, for example, who are tickled by strangers, may smile or even laugh while at the same time withdrawing and becoming upset at the stranger's inappropriate behavior.

Many people, in fact, find tickling to be an unpleasant activity. Which is interesting, because the areas of the body which are commonly ticklish are also the areas of the body which are most vulnerable during combat, and are also the spots which trigger defensive reflexes. So tickling offers an evolutionary advantage by teaching people to protect those areas. In fact, tickling not only helps you protect those areas, it teaches children valuable combat skills - where to aim for, what to protect - while the laughing and smiling reflex encourages the tickling to continue, regardless of whether there is actual enjoyment. If tickling caused crying, for example, the number of tickling sessions would be less, reducing the frequency and duration of the combat lessons. 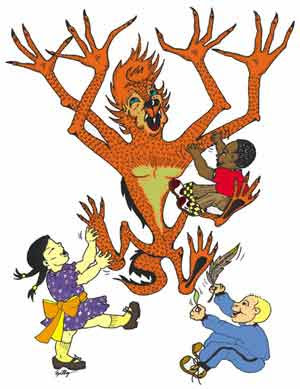 Tickling the Monster, courtesy of The Imagine Project

Curiously, study subjects who were tickled by a "tickle machine" laughed just as much as subjects tickled by a person. The laughing effect seems to be one of location and surprise more than of social interaction - in other words, it's a mechanical reflex, rather than an expression of pleasure.

But I think these studies don't completely cover it. Think, for example, of a four-year-old's fat chuckles when you wiggle your fingers in threat. Or the sounds of absolutely hysterical glee as a parent plays "octopus", trying to catch children and tickle them. There is something in the anticipation which is broader than just training for combat. Training for avoidance? Learning elusive skills? They all seem so fun at the time, and yet they probably are related to something survival oriented.

And yet... perhaps something could be said for the joy in physical contact. It's true a large number of people don't actually like being tickled. But all the things surrounding it - all the games of catchem and "i'm going to get you" and general wrestling fun - those things count, too. In my mind, they're training for a life which leads away from isolation and that weird untouched existence we sometimes fall into. Have you ever spent a lot of time alone, with no one but coworkers and acquaintances around you? Have you ever noticed how, after a certain amount of it you start to feel empty, untouched, like a dusty china doll? It's a terrible feeling. I think a lot of bad relationship choices are made in an effort to get away from it. 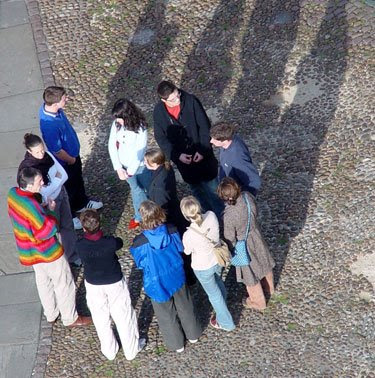 Why is this? Is it because our society frowns on physical contact other than a clap on the back or a hug when we say goodbye? Too often, physical contact is seen as sexual, or an attempt at sexuality. Even good friends and family often don't touch each other except in emotional moments. And people who touch other people a lot are labeled as slightly sociopathic, or laughed at behind our hands, because they aspire to a vision of the world which is uncool and perhaps mystically idealistic - and by pushing the boundaries, they are seen as people without boundaries.

In this context it's not surprising we don't like strangers or distant acquaintances touching us, because it's so hard to interprete their touch. Do they want something from me, we wonder? Are they being sexual? It's easier to simply discourage it than to be confused. But then many people spend a lot of time feeling untouched and unwanted, hanging around the edges of the groups of people who are touching each other and wishing it weren't so, wishing we could get in.

In a perfect world, then, would tickling and wrestling be more incorporated into society, teaching us more ways to make physical contact that are nonsexual? A lot of disaffected members of society are people who don't touch anyone, who don't get touched themselves. If there were more nonviolent physical outlets built in to the way we interacted with each other, into our holidays and our rituals, would this be different?

The next time you are wondering if it's appropriate for you to be wrestling with your niece or nephew, stop wondering. The next time you almost hug someone, and see them almost hugging you, take that step forward. Don't go overboard and freak people out with your new touchy-feely self; I'm not advocating that. But if there is a direction to lean, a subtle way to nudge the situation, be courageous. Don't leave yourself on the dusty shelf any longer. Maybe we can all benefit. 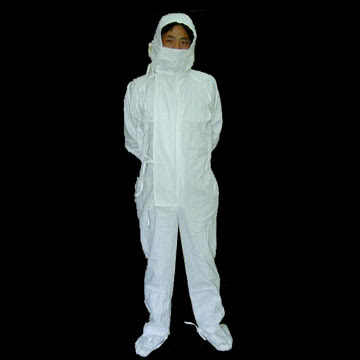 I've heard that men used to walk around with linked arms & were much easier with touching in public - until the Oscar Wilde case.

I know the artist didn't mean it to be, but I find that "isolation desolation" image very appealing. If it's desolation, it's magnificent desolation.

Dr. Jack A. Vernon was one of the researchers working on sensory deprivation in the late 1950's. In addition to the negative effects you always hear about, he discovered some positive ones. A couple of the test subjects had bad cases of poison ivy, which cleared up completely under SD. Others were coming down with bad colds, which also cleared up completely.

"Man's jaded sensory world takes on a new meaning as a result of S.D. The ordinary, the usual, the almost unnoticed of our everyday world become, under S.D., very desirable experiences, and perhaps for the first time we come to appreciate the value of our ever-changing stimulus world. And if it could mean that man would better utilize the information so constantly available to him, then one would recommend periodic sessions of S.D. for all."

That's very interesting, about the Wilde case. I think you're right about the timing of men and touching - but I had no idea it might be linked to that. Makes sense, though. It was incredibly notorious at the time.

The artist Barbara Krueger put it so well:

(which you can see here)

Dude, you are delusional. These days all touch is related to sex, and it's getting worse everyday. You can either try to fight that (and end up in jail) or just go with it and figure that the days of physical contact are over. Besides, talk really is not that cheap. Touching and expecting physical contact just makes it harder to be independant. Talking you can actually learn something from the other person.