Lunokhod and the Art of Space 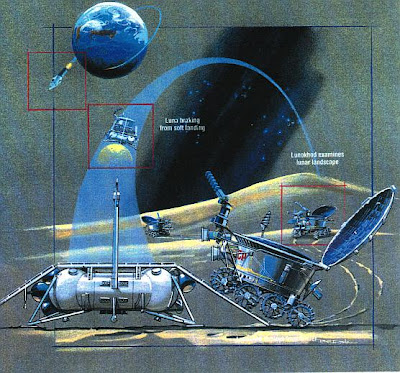 I recently wrote a short story in which the archeologist protagonist is on the Moon, years after the human race is dead, looking at the human leftovers there and wondering about our culture. While researching the items that were left there by our astronauts, I came across this image of Lunokhod 1, sent in November 1970 by the USSR to travel the Moon, probing and testing with its various tools and to send back images and analysis of the lunar surface.

"The vehicle was powered by batteries which were recharged during the lunar day by a solar cell array mounted on the underside of the lid. To be able to work in vacuum a special fluoride based lubricant was used for the mechanical parts and the electric motors (one in each wheel hub) were enclosed in pressurised containers.[1] [2] During the lunar nights, the lid was closed and a Polonium-210 radioisotope heater unit kept the internal components at operating temperature. Lunokhod was intended to operate through three lunar days (approximately 3 Earth months) but actually operated for eleven lunar days."

In other words, the thing was so well-made that it lasted almost four times longer than it was designed to. And no wonder! Look at that thing! Was ever something so beautifully and functionally designed, so compact and complete? It looks like a Steampunk idea of itself, which is oddly appropriate, given that it was the first roving remote-controlled robot to land on another world.

It's hard to put a finger on why the Lunokhod 1 is so attractive to my eyes, but I think it has to do with the fact that it's not all angles. The simple tub-like shape, like a soup tureen on eight wheels; the two wonderful stalk-like eyes with their hanging lids; the wonderful appendages with their enigmatic functions; and best of all, the lid which opens in the day to charge up and then closes (with a clang? Perhaps if there was atmosphere) at night - all these combine to give it a nearly-friendly anthropomorphic quality, like a wind-up toy or the walking bathtub from Nightmare Before Christmas. And am I the only one who wishes they could look inside sometime when the lid was open? What's inside it, other than the solar panels on the lid? 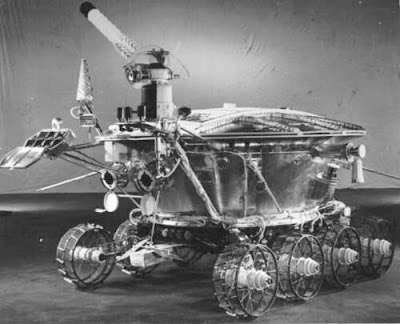 To add to the general mystique, I then came across this remarkable little piece of history while stumbling around Wikipedia:

"According to a French documentary TV film "Tank on the Moon" by Jean Afanassieff, the Lunokhod design returned to limelight 15 years later due to the Chernobyl nuclear powerplant disaster. The East German made remote controlled bulldozers available to Soviet Civil Defence troops weighed dozens of tons, too heavy to operate on the remaining parts of the partially collapsed reactor building roof. Human labourers could not be employed effectively to shovel debris, since workshifts were limited to tiny 90-second intervals due to intensive ionising radiation.

"Lunokhod designers were called back from retirement and in two weeks time they produced a field-usable, six wheeled, remote control vehicle prototype that was light enough to work on the weakened roof. Since the original Lunokhod moon rovers used nuclear decay heatsources for internal rack climate control, their electronic systems were already hardened to resist radiation. This benefit allowed the 1986 designers to quickly come up with a derived vehicle type for nuclear disaster recovery work. Eventually two such six-wheeled rovers were delivered to the Chernobyl accident zone and proved very useful for remotely operated debris clearing work, saving lives and earning decorations for the designers."

Somehow this little description of a moment in history feels like the perfect reward for the group of designers who created such a perfectly aesthetic object.

In my story, at least, it was the finding of this one artifact that convinced the Enlightenment-style aliens that we were not a complete loss, after all: we clearly had some inkling of aesthetic sensibility. I'd like to see more aesthetic influence on the stuff we send out into space, wouldn't you? Perhaps a few more rococo curls on our probes, or at the very least, decorative rivets. Perhaps they could escape the black-and-white sobriety of the paint jobs we've stuck to until now? Then at least our space-junk wouldn't be completely divorced from the important cultural life of our world. NASA could hire artists-in-residence to help design the "look and feel" of the space probes, so that they embody some message about the way we look at the universe, not just about the facts and functionality of science.

Instead of ugly plaques with our body outlines and a few lines in various languages, I would like to see us leave "postcards" with some of the world's great artworks shown on them. If you look at the images from the two Voyager's Golden Records (sent out in 1977), which appear by my researches to be the only extensive image selection to be sent out into space, they show all kinds of things about humans and Earth: various mathematical and physical concepts; how we are conceived, born, and grow; what the landscapes look like here; all of our engineering feats (cars, airplanes, bridges, etc). There are 116 of them. Two of them show, respectively, someone painting a picture (kind of in the background, no less) and a string quartet. This is the sum total of mention of art (there are at least three pictures of cars and five pictures of dwellings).

Okay, so it was 1977, and the big thing was science, and making sure the aliens who encountered this could see what our science looked like so they could grasp our world-view, so to speak. But what about how we view ourselves? It seems to me a great deal can be said about us by how we express ourselves, and the great variety of cultural artifacts we produce. What about Japanese woodcuts? The Mona Lisa? African Kente cloth? What about the wave organs, the Expressionists, or (God Forbid) Mount Rushmore? What would alien cultures learn about us from this dazzling array? It would be easy enough to show someone painting, and then show a series of paintings; to show someone weaving and then a selection of woven things. And so on.

It's true that various forms of music have been sent out into the spheres, probably because music is a fairly compactable (and mathematical, and therefore acceptable) art form. There has been some discussion of the efficacy (or not) of images as a way of communicating to extraterrestrial cultures; but it seems to me that even if they don't have eyes per se, they are likely to have some way of sensing the wavelengths of light, so they will "see" it somehow. And it most certainly seems that any culture that is advanced enough to be out in space, finding our stuff, is surely going to have some concept of aesthetics, and therefore find our artmaking the subject of much interest and discussion. Think about meeting someone for the first time. Are you more interested in how they built their house, or in how they see the world - what music they like, whether they read and go to museums or simply watch violent movies every night on TV? I suspect that meeting some other race would be like the dance we do when making a new friend, at least a little bit.

I don't know about surely-- I think the anthropomorphic fallacy extends REALLY deep. I agree it will be a dance, but fundamentally very weird, as they pipe their particles trying to make a thought-net with us & we keep vibrating the gaseous elements of our planet, trying to speak.

My friend Peter worked at NASA Ames in Mountain View. A Lunakhod copy had been sitting in their corridors for years, essentially acting as a doorstop. He kept trying to get permission to bring it to our Burning Man village, the Moonbase. Every year we would get close but not quite there. I still regard it as an old Burning Man friend, though :)

Sometimes I wonder, if any average (common, whatever) human can understand those golden plates. Given to any Joe - would they mean anything? When I first saw them (just a kid then), I thought: "Oh, no. Let whoever finds them know - I'm not with those guys!"

It's extremely hard (or rather impossible) to look at mankind from some other point of view - since we are the only sapient race here. Well, or since we are unable to communicate with dolphins, monkeys, horses and all those other guys around properly.

Imagine some creature find a plate with some signs. "Oh, they knew some geometry. Poor old sweet thingies! Too bad they're extinct." It's what we think of ancient Egyptians, right. Yet still can't get any idea what are some writings about. And it's the same species!

It's the believe that them aliens are just same as we that is wrong. On the other hand, expecting the to be a lot different is quite wrong too. Let's hope no one will ever find the plates.

(Ugh. I may be a bit pessimistic on the matter. Never mind that).

I dont' get the golden plates at all either.

Fantastic article! I agree that art is conspicously under-represented in those records.