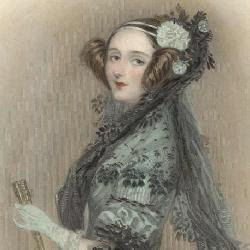 A friend just sent me this:

"At least one study, and plenty of anecdotal evidence, suggests that women need female role models more than men need male role models. While it's not the only problem facing women in technology, it's a relatively easy one to address.

Suw Charman has put out a call for everyone - women and men - to "come together to highlight the women in technology that we look up to. Let's create new role models and make sure that whenever the question "Who are the leading women in tech?" is asked, that we all have a list of candidates on the tips of our tongues."

She's looking to get 1,000 people to blog about a woman in technology - whether that's IT, publishing, animation, any area of technology! - whom they admire, on March 24th.

Sign up to participate here, or read more about the idea here."

I think this sounds like a very interesting idea. Years ago, when I worked as one of the Webmasters and content writers of a large startup website called Girl Tech (now mostly defunct as far as I can tell), part of my job was hunting down women who made a difference in technology and interviewing them, so that girls ages 8-14 could see how many different kinds of tech jobs were out there. It was great stuff, talking to astronauts and women geologists; completely absorbing. I'd love to revisit it.

Ms. Charman has apparently already reached her goal, but that doesn't mean we can't blog on that topic. I'm going to do it, with or without the pledge. Anyone else?
at 1/18/2009

I'm sorry to be a wet blanket, but I'd simply call that bigotry of the first order.

Well, I think it's hard to simply call it bigotry when people have done scientific studies about it and had results that proved the point. I haven't read the actual studies but you can read about how they were conducted here. Then you can decide for yourself...

Regardless, it's hard to see a downside to writing a post about a woman who has managed to excel in fields where we were historically underrepresented. Yay, girl power! I've been planning to do this too. :)

Anon, what about the consideration that men hardly need MORE role models when there is a dearth of role models for women. Men may need role models, but society is geared to give them.

Also, re women in tech, sadly my field being anthropology, I'm completely blanking out (although I wouldn't be the geek I am without exposure to geeky women). So, I applaud the effort.

As a technologically challenged female (but one who is learning!) I would love to be exposed to female role models in the field. While I am clueless about who those women are, I really look forward to reading the posts that come from this challenge. Thank you for sharing the info - I'm going to go check out the links you've provided now!
Karin