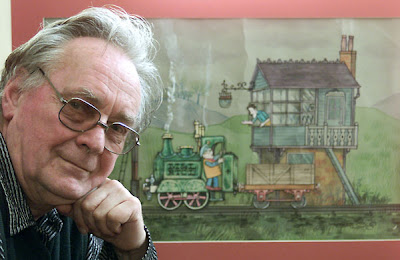 Oliver Postgate, the creator of Noggin the Nog, Ivor the Engine, the Clangers, and Bagpuss, among other television characters, has died. 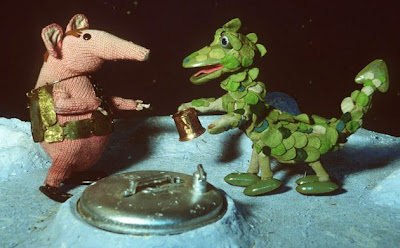 The Clangers shared their hollow planet with the Soup Dragon (pictured right), while the Iron Chicken - modelled from Meccano [aka Erector Set] - lived in an orbiting nest made of scrap metal.

I'm a late believer, but have since come to appreciate the little singing mice in Bagpuss - and was really a goner once I had read the whole set of Noggin the Nog books to my elder daughter. 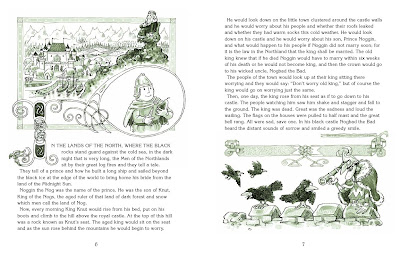 Here's a snip from his obituary in the Guardian:

"In 1957-58 he joined one of the new commercial television companies as a stage manager. But it was when he was assigned to children's programmes that Postgate was drawn to his true niche in life. He thought the youngsters were getting a penny-pinching deal, especially in the matter of storytelling.

"Marionettes on strings or glove puppets were all very well, but to keep pace with expanding young imaginations, he felt that fully animated cartoons or puppet dramas were needed. And these were far too expensive for everyday use.

"With an artist friend, Peter Firmin, he set up an independent production outfit called Smallfilms to see if they could turn out affordable animation. Their studio was a cowshed (later replaced by a row of converted pigsties) on Firmin's farm near Canterbury, in Kent. Postgate dreamed up the characters and stories and taught himself the laborious skills of frame-by-frame animation. 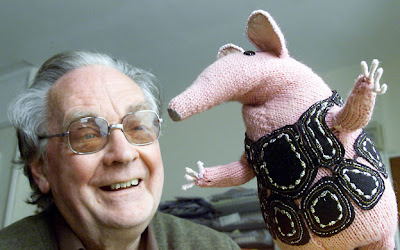 "Firmin drew the pictures or designed the sets and made the models when they switched to puppetry. The bassoonist Vernon Elliott came in to furnish the music. They began with a 10-minute cartoon series, The Saga of Noggin the Nog (1959), in which a stolid young Viking prince was up against an evil uncle and various Nordic monsters. By eliminating most overheads and taking little reward for themselves, Postgate and company were able to turn them out for a 10th of the going rate. They sold the series to the BBC."

It's a reminder of all the people who continue to try to make the world better, at little gain for themselves - who want to make people happy. I applaud them, and I applaud Mr. Postgate. 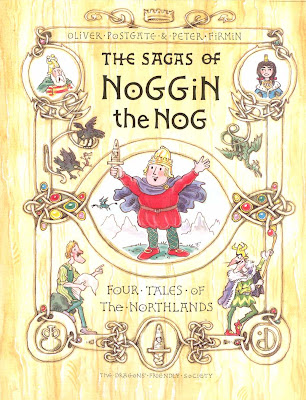 There is apparently still a pretty good DVD business for his odd little shows. Children love them, and they are just weird enough to appeal to adults, too. Check out the Dragons' Friendly Society, the center of all Noggin the Nog creativity and a nice example of good self-publishing working well.

More pictures of Mr. Postgate and his creations here.

PS. If you are interested in ordering Noggin the Nog stuff (or the DVDs of Bagpuss, etc) from within the US or other non-British countries, go here to their online eBay distributors, who will take actual plastic. The DFS themselves only take cheques.
at 12/10/2008

There don't seem to be any graphics - except the YouTube link. Please, I want Gracula, and the Soup Dragon, and other fine creations. I also recommend Oliver Postgate's essays (available at http://www.oliverpostgate.co.uk/index.html)

Thanks for this nice post. I really enjoy this great article.